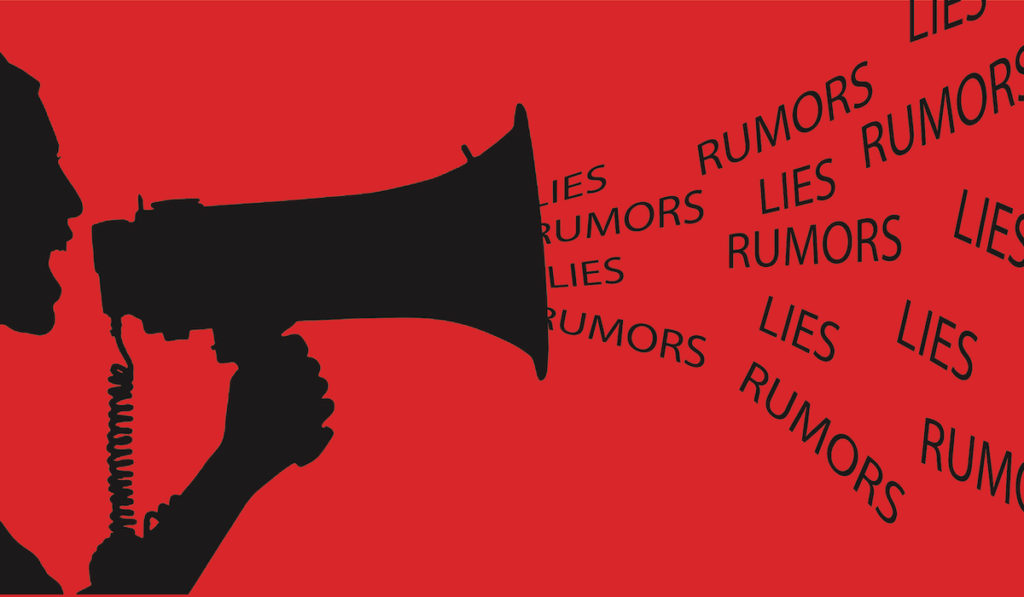 I first came across the rumor in a group text on March 19.

A friend sent a picture of a text message from her sister: “More bad news to come I am afraid in 72 hours I have heard we will be under a national shelter-in-place shutdown.”

Below it my friend added, “Not sure if this is real but if so, stock up on food all!”

My other friends quickly questioned her.

“OK, where is your sister getting that info?” one asked.

“We’ve already closed most businesses that are customer-facing,” said another.

After a pile on, my friend cried (virtually), “I don’t know what’s true and what’s not anymore!”

With the spread of the novel coronavirus has come another disease, advancing rapidly on social media and in sketchy blog posts. Maybe it’s infected your friends, your family or even you, that of rumors, misinformation and conspiracy theories.

It is an “infodemic,” as Tedros Adhanom Ghebreyesus, the director-general of the World Health Organization, has said.

“Fake news spreads faster and more easily than this virus, and is just as dangerous,” he said.

In Louisville, the rumor I heard had been circulating for weeks. It claimed that there would be either a national or statewide shutdown, but the details were scarce: Would it be different than the “Healthy At Home” orders already in place? Would the National Guard be involved? The questions were never answered, and the rumor kept resurfacing.

A recent New York Times story revealed that Chinese operatives may have been behind amplifying shutdown rumors in the United States.

Then, there is the conspiracy theory that has swept the world and Louisville, that COVID-19 is caused by 5G cell phone technology. Other misinformation and outright lunacy abound: The coronavirus is a biological weapon unleashed by the United States government, for example. The most popular conspiracy theory, according to a New York Times analysis of data from the media analytics company Zignal Labs, is that Microsoft founder Bill Gates created the novel coronavirus in order to gain control of the global health system. (We shouldn’t have to tell you but yes, these conspiracy theories have been debunked by Snopes.com and pretty much every other reliable source).

Making it more difficult is that some people don’t trust the organizations that employ the experts who understand the virus best, such as the federal Centers for Disease Control and Prevention and the World Health Organization. Fostering their suspicion is that scientists do not fully understand the virus yet and, therefore, they have changed their recommendations for how to protect ourselves against it. That’s a theory from Isaac Chun Hai-Fung, an associate professor of epidemiology at Georgia Southern University’s Jiann-Ping Hsu College of Public Health who studied misinformation during the 2014-15 ebola outbreak.

“It is a new virus,” said Fung. “The epidemic is evolving. Scientific knowledge about the virus is in flux. It is continuously changing.”

In a blog post on Medium, Kate Starbird, an associate professor at the University of Washington who specializes in how information is spread during crisis events, said that misinformation is a result of the natural gathering of facts that people do when they’re trying to make sense of an uncertain situation. They piece together the information they find and often share their conclusions with the people they know. This process can breed rumors, and the ones that turn out to be false are misinformation.

“Our information feeds, from television sets, internet searches, and social media, provide continuous updates about the unfolding crisis — some of them accurate, some of them seemingly less so,” wrote Starbird. “Though crisis events like this one have always been times when rumors and misinformation spread, the problem seems especially acute now, with the rise of the internet, the widespread use of social media, and the pervasive politicization of just about everything.”

Almost two weeks after I first learned of the national lockdown rumor, Gay Adelmann, a Louisville public schools activists, posted on Facebook to her 2,000-plus friends: “I’m hearing a two-week federal lockdown could be coming as early as this week. Anyone here with first-hand knowledge of National Guard activation?”

When I asked her about it, Adelmann said she heard the rumor from an acquaintance in South Carolina who claimed to have a family member who worked at the Pentagon. She did not know if this was true. But, it lined up with her suspicions that Gov. Andy Beshear and President Donald Trump had been hardening their tone about coronavirus to prepare the public for some shift in government response.

Adelmann said she shared what she had been told because she thought that people should prepare, both mentally and by gathering supplies, if the rumor turned out to be true.

“If something is as important enough to share with my children, just to be food for thought for them, then why wouldn’t I share it with my friends on Facebook?” she said.

As of April 28, more than three weeks after Adelmann’s post, no lockdown has occurred.

In this “connected era,” according to Starbird, there is an overabundance of information and the public must find out what to trust and what to throw away.

Information, and misinformation, is swirling faster under the coronavirus than other recent disease outbreaks, including ebola, because it’s affecting the entire world, not just one country or region, said Fung.

A new study by researchers from MIT and the University of Regina in Canada found that many people spreading coronavirus misinformation were doing so without thinking about whether it was accurate first. “Accuracy nudges,” or prompts to think about accuracy before posting, slowed rates of sharing false information.

Adelmann said she hopes that everyone who reads her comments on social media uses their own critical thinking skills before deciding that they’re fact. On Facebook, she’s also shared information about Advil, or ibuprofen, aggravating the coronavirus. This tidbit, spread originally by a public health official in France, is not something that has been proven, although some experts say to use Tylenol instead of ibuprofen just in case. When Adelmann shared the French official’s warning on a Facebook friend’s status, they got angry with Adelmann, accusing her of spreading false information. But she felt justified in sharing.

“I’m not telling you it’s a fact, I’m just trying to share with you that there are a lot of unknowns, and it’s possible to weigh all of the information at the same time and make an educated decision,” she said.

According to Starbird, discerning between truth and fiction can become more difficult when elected leaders share “dubious” information and contradict their own response agencies.

This has happened here as Trump presents information about coronavirus that is at odds with what comes from health experts and scientists who work for him, such as Anthony Fauci, director of the National Institute of Allergy and Infectious Diseases.

And, still, there are those who spread false information purposefully, according to Starbird — those who wish to gain social media followers or who ask for donations for what turns out to be a fake organization.

The ultimate consequence of an infodemic is that people might end up making bad decisions for their health based on incorrect information, said Fung. He cited a news story about a couple, one of whom died and the other of whom ended up in critical care after ingesting chloroquine phosphate, a chemical used in aquariums. This was after President Donald Trump pimped another form of chloroquine as a potential miracle drug for COVID-19.

Chanelle Helm, a core organizer of Black Lives Matter Louisville, said that as a community leader, people often bring her rumors they’ve heard on social media for her thoughts on their accuracy.

Those who spread rumors, she said, should think about their potential effect on others:  Panic could cause unnecessary buying and hoarding of groceries, leaving others who need food and supplies in a lurch.

“We really should be trying to make sure people are OK and not getting so many scared,” said Helm, who has been fetching groceries and supplies for people in her community who are not able to leave the house out of fear of catching coronavirus.

Fung’s advice for the public is to follow instructions and guidelines from healthcare providers and, before sharing information, to check that it comes from a reliable source such as peer-reviewed journals, a public health agency like the CDC or a reputable news organization such as the BBC or The New York Times.

He, like many people during this time, shares information about COVID-19 on his social media. “But I would choose those that I believe is reliable information coming from reliable sources,” he said. •