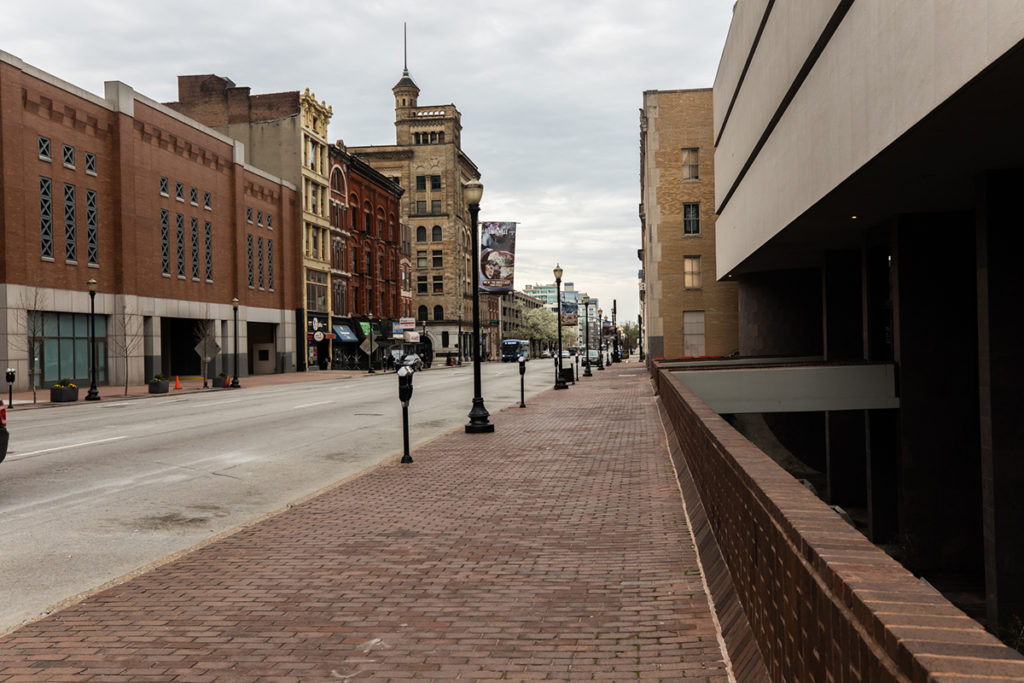 'While it’s understandable that the sudden disbursement of the usual gathering of persons was related to everything else having been closed over this Corona business, the question suddenly shifts from Where did they all go?'

From the Political Affairs Desk of the Kentucky Derby Motor Speedway.

If there’s to be a clear thesis to this piece, I’ll just go ahead and ask the pressing question of the moment: Mayor Fischer, where did the homeless go?

They are a regular mechanism of the Downtown Machinery of the Universe, neither good nor bad in any way other than the city refuses to do anything about the issue, so I am obligated to ask again — where did the homeless go?

In this Universe, there ought to be safe spaces available to all when things haven’t taken a turn toward the Strange Days of Corona.

They include Houses of Knowledge such as public libraries. Louisville Free Public Library located downtown is a model example of this philosophy because you might not like all the homeless and other assorted folks who hang out in front of the library, but it is their right to be there. The library is a neutral space that doesn’t exist to sell anyone anything outside of the love of learning and with heat and air conditioning, depending on the temperatures. If that means the downtown library and the surrounding grounds are constantly occupied by those that have nowhere else to go, then so be it. As long as their activities aren’t the kind that bring the ambulance or LMPD, I can’t see another option until the city of Louisville pulls its thumb out and finds a solution during regular operating status.

But now the libraries are closed.

The sudden and rapid decrease of one regular working mechanism is something to be immediately noted, as the Office of the Political Affairs Desk keeps close tabs on the Downtown library grounds. While it’s understandable that the sudden disbursement of the usual gathering of persons was related to everything else having been closed over this Corona business, the question suddenly shifts from: Where did they all go? Now it is: Why don’t they have anywhere else to go?

So, I ask, again, in the wake of the eerie quiet where the sound of church bells echo in the absence of the usual drone of background noise — Mayor Fischer, where did all of the homeless go?

This is not to say that they all have disappeared. There are some who still hang around one spot or another favored off of the library grounds, and there are still a few who push shopping carts up and down the sidewalks, but by and large, the vast majority are nowhere to be found.

I am left asking this question after reading around the internet to see if there were some unified solution or response from the city that caused an entire portion of downtown to vanish. The Courier Journal reports of the story of one man, Ricky Freeman, facing homelessness, but aside from the Salvation Army offerings, the article doesn’t state clearly where all of the homeless went or if the Salvation Army has enough space to make sure everyone is safe and properly socially distanced.

If not, there’s nothing worse than a crowded gym full of people, and it takes just one of them coughing before there’s a full-on outbreak.

There’s an additional moment of revelation at work in the wake of Corona: Either the Salvation Army and/or the city could have already provided some kind of relief for the homeless of Louisville before the pandemic or, I’m going to ask again, clearly and angrily, where did the homeless go, Mayor Fischer?

And while this is entirely related but a second part of the story this week, but I also have to ask — what in the actual FK is wrong with y’all on 13th Street? What in the blue hell possessed all of you to go out there?

Despite all of the evidence presented, despite all of the stay home orders from Governor Beshear the Younger who’s turning blue in the face from the pure Stupid, there were reports of a hundred people out there having themselves a good time.

There is a time to party in the streets once all of this Coronarama is over with but that time is Not Now. I’ll be right out there with you in full form and fashion once this is all over with but, Really, Not Now. Uncle Andy would be disappointed with you.

If your pastor/preacher/priest/whatever states that going to service right now is a test of your faith, the only thing they’re testing is their ability to shake you down through the collection plate. Read your Book at home, whatever that book may be, but At Home. A great place to start on how to behave oneself right now, if you don’t have a particular book in mind, is anything by Kurt Vonnegut with particular attention paid to “A Man Without A Country” or “The Silmarillion” by Tolkien.

In order to make a logical argument to the last few of you that don’t want to listen or question the personal rights issue of a #HealthyAtHome mandate — I am presenting this to you an equation of why we all have to #TeamKentucky really, really hard right now and not as a means of panic but of sobering reality.

Corona reportedly has a 1% to 2% mortality rate, right?

Take your number of Facebook friends and multiply it by .01 and then .02.

Take the number of homeless sheltering in an old gym and multiply that by .01 and .02. (Again, I ask Mayor Fischer, where did all the homeless go?)

Look at that number and Stay Home. •

Huntress Thompson is a poet and philosopher who’s #HealthyAtHome in Louisville. Special thanks to Guestroom Records for its magical delivery service during these trying times. #WashYourHands