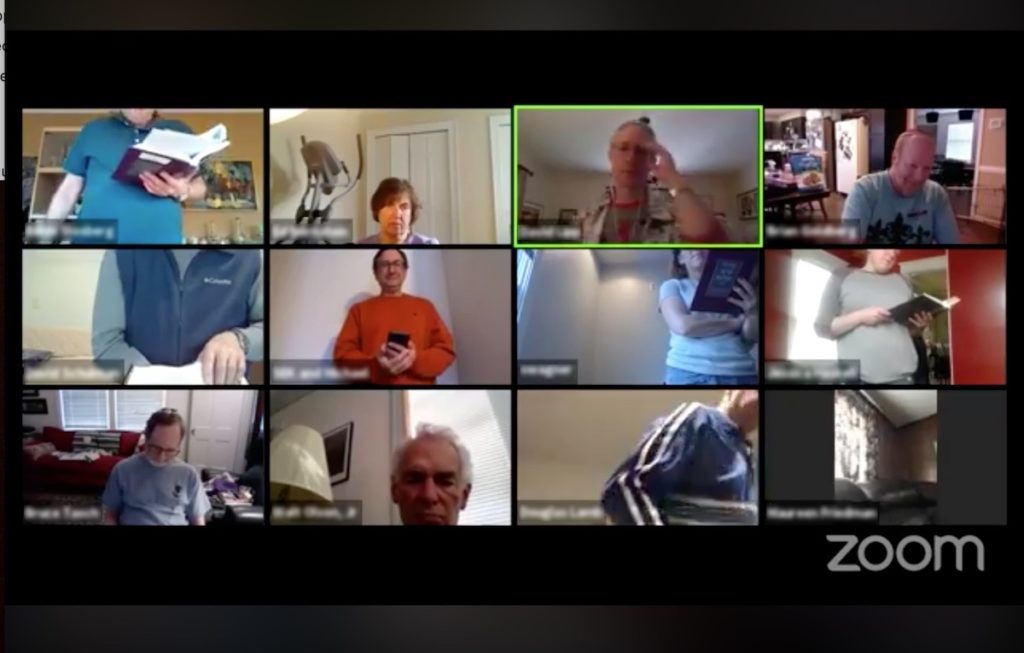 Hackers broke into a recent Zoom meeting like this one at Congregation Adath Jeshurun.

A Louisville synagogue has fallen victim to a new form of harassment called Zoombombing.

“It was like they overwhelmed me,” said Slosberg, “And I felt like I was in a street fight and overwhelmed by half a dozen people.”

Slosberg kicked out the hackers, but they kept streaming back into the video conferencing app he was using, forcing him to stop the service.

“It happened so fast,” said Slosberg.

The attack is similar to those chronicled by news media around the country. The hackers are exploiting vulnerabilities in Zoom, the app, prompting a warning to the public from the FBI. It’s happened as Zoom’s daily use rate has surged by the millions, prompted by the coronavirus pandemic forcing most public gatherings online.

Hackers can look through social media to find Zoom links to open meetings. Some hackers solicit them from others.

On April 1, Zoom’s CEO responded to security concerns in a blog post, saying that the company would freeze work on new features to focus on patching security holes. In the meantime, Zoom users can prevent unwelcome guests by taking several steps outlined by the company, including setting up a waiting room to screen participants who want to enter the meeting.

Zoombombers have crashed meetings including high school classes, Alcoholics Anonymous meetings and dissertation presentations, often subjecting viewers to pornography and expletives. And there’s been a particular focus on Jewish virtual gatherings. The Anti-Defamation League wrote a blog post “What is ‘Zoombombing’ and Who is Behind It?” about hackers hijacking Zoom conferences at Jewish schools, synagogues and nonprofits. In at least two cases, a lone perpetrator performed an anti-Semitic rant and exposed a swastika tattoo that was inked onto his chest.

Slosberg didn’t want to speculate on the motivation of Thursday night’s hackers. “It’s hard to get in the mind of people who feel hatred,” he said. But he called the event “terrible” and “ugly,” and he reported it to the Secure Community Network, a national nonprofit that collects reports of security threats to the American Jewish community.

“It’s shameful,” Slosberg said. “You know, we need to come together as a nation, and the real enemy in our lives is this virus, and I just don’t think we have room for hatred.”

Adath Jeshurun has implemented extra safety measures to make sure another hack doesn’t happen. Slosberg now lets congregation members into the Zoom session one by one.

He thinks the measures have already prevented one hack. On Sunday, Slosberg saw an oddly long username in his Zoom waiting room. When he asked the user to identify themselves, they did not respond, so Slosberg decided not to let them in. Since March 31, the congregation hasn’t posted a Zoom link to its Facebook page as it was doing regularly before.

Besides the incident last Thursday, Slosberg has embraced virtual synagogue gatherings since Gov. Andy Beshear advised all Kentucky houses of worship to halt in-person services in March. Currently, the congregation streams 12 services a week alongside educational presentations from experts as well as performances by comedians and musicians. Slosberg thinks that Adath Jeshurun could be reaching more people now virtually than the congregation did when all of its gatherings were in person.