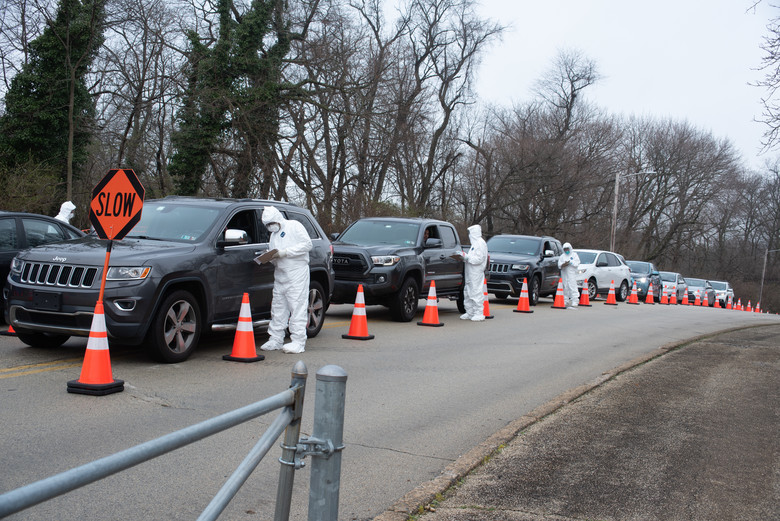 What Kentucky needs: Hundreds of COVID-19 tests are administered daily in Pennsylvania with help of the National Guard there. | Photo by Senior Airman Wil Acosta.

The Kentucky state government has yet to announce its plan for drive-thru coronavirus testing sites, but at least two medical marketing companies set up pop-up tents, promising results in 24 hours in exchange for $250, the legality of which is now being investigated by the metro police.

Although these companies are claiming to have been in contact with local government officials, Metro Council President David James was blunt about the situation. He told The Courier Journal on Wednesday that the testing sites are “scams.” Mayor Greg Fischer also used the word “scam” in a livestream earlier today.

The state’s inaction opens the opportunity for cowboy-capitalist sharks to prey on the sick and scared. Whether these particular pop-ups really are what they say they are or are fraudulent — or a mixture of the two — the reason they exist is that there’s a high demand for quick, convenient drive-thru testing. And Kentucky’s lag is creating a vacuum, allowing these companies to seem like a viable option.

Seven states opened drive-thru testing sites three weeks ago. More have recently followed. Gov. Andy Beshear has said that Kentucky is working on an ambitious, statewide plan for drive-thru testing, but there have been delays and struggles. Some local experts claim we already have an adequate amount of testing. But there’s little doubt that wide-spread testing has been drastically slow in Kentucky and nationally.

“Our hospital systems have the ability to test people that need it right now. I know one of the shortages has been both [personal protective equipment] and testing kits, and any extra resources for both of those that the city gets, we’re trying to coordinate with our systems. And then family health centers are also testing for people who don’t have insurance or aren’t connected to one of the systems.”

Kentucky took early action to promote and enforce social distancing. We’ve kept our numbers of cases low, as compared to other states. Beshear has been a dedicated, transparent, soothing presence.

It seems we have composed adults making reasonable decisions, acting as a buffer between our state and the whims of President Apple-Sauce Brain Spray Tan Caligula.

But, this is this is a fluid, unpredictable pandemic, and we could see a surge of cases at any time.

The takeaway from this strange and depressing pop-up testing situation is that we need more results from our local and state leaders.