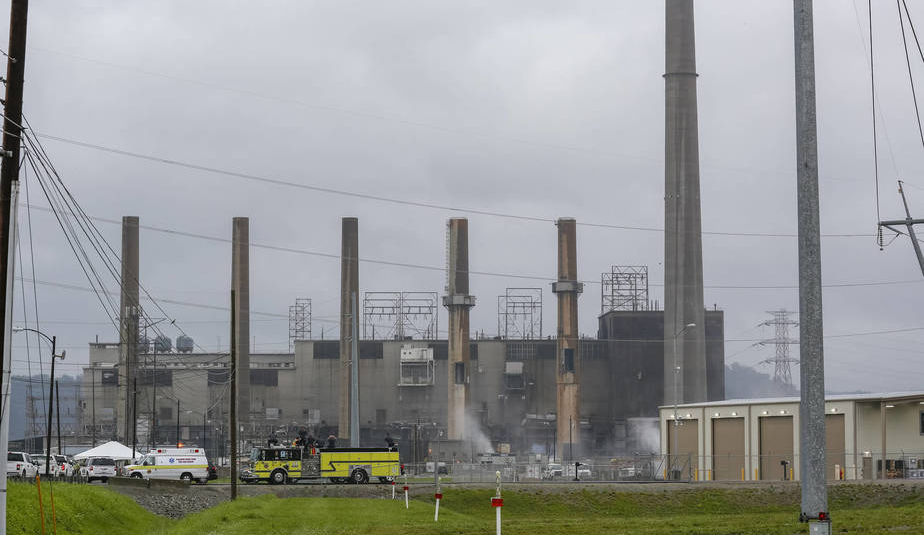 LG&E imploded the Can Run Generating Station in Louisville on June 8, four years after the coal plant had been decommissioned. Credit: LG&E.

By taking advantage of a “natural experiment” brought on by the closure of one coal-fired power plant and the addition of new pollution controls at others in the area, health researchers have documented how lowering air pollution improves the lives of asthma patients.

Led by Columbia University’s Joan A. Casey, an environmental health sciences professor, the team calculated a 55% reduction in the amount of lung-irritating pollutants in the air over Louisville beginning in the spring of 2015. The reduction came after the closure of Louisville Gas and Electric’s Cane Run facility and the installation of sulfur dioxide scrubbers at its Mill Creek plant and another, separately owned plant in Rockport, Indiana.

The researchers found that there were nearly 400 fewer hospital admissions or emergency room visits for asthma attacks in Louisville in the year following the closure and the addition of pollution controls.

Tapping into data from an earlier research project, the researchers also found a 17% drop in the use of inhalers by 207 asthma patients in the month after additional scrubbers were installed at Mill Creek in 2016.

The study also included data from a fourth  coal-fired plant that added scrubbers in Madison, Indiana, in 2013, also separately owned. Rockport is about 75 miles from Louisville, and Madison is about 55 miles away.

The findings come at a time when the U.S. Environmental Protection Agency has been attacking the science used to establish federal air pollution regulations that have helped cities like Louisville clean up their historically dirty and deadly air quality.

The research also has implications for the ongoing COVID-19 pandemic, which amounts to another “natural experiment” where air quality has been suddenly improved — this time, because large sectors of the global economy have shut down.

When tougher air quality rules from the Obama administration went into effect prior to 2015, and cheaper natural gas began to displace dirty coal-burning nationwide, utilities invested in retrofits in the Louisville area and across the nation.

“Air quality changed rapidly over a short period of time,” Casey said. That allowed the researchers to make comparisons between groups of people suffering from asthma that were more or less exposed, before and after the changes, she said.

Louisville, a city of about 766,000 people, has had a decades-long struggle with air quality, in a part of the country still largely dependent on coal for its electricity.

Coal plants emit a wide array of different air pollutants and across Kentucky. LG&E and its sister company, Kentucky Utilities, have a current energy mix that is 80% coal and 19% natural gas. Indiana was still reliant on coal for 70% of its electricity in 2018, according to the U.DS. Energy Information Agency.

The team’s paper was published Monday in the peer-reviewed science journal, Nature Energy. The study has 15 authors, including researchers from the University of California, Berkeley; Harvard University; University of Texas; and Propeller Health, in San Francisco.

Across the country, electricity generation continues its dramatic shift away from coal. Coal provided 23.5% of the nation’s electricity last year, down from 46% in 2010. This study illustrates one way that change will lead to better public health, but the most important implications are global, Casey said.

“In the United States, coal-fired power plants are going away,” she said. “Other places in the world, we are still building new coal-fired plants and some of them are quite large. This is critical information for those places.”

LG&E replaced its Cane Run plant with a cleaner-burning gas plant, also in 2015.

Opportunities for studying how rapid decreases in air pollution affects human health, like the one Casey’s team seized in greater Louisville, are rare, she said. Another came after the 2008 Beijing Olympics, when China closed factories and limited the use of cars and trucks during the games, she said. A 2012 Journal of American Medicine paper identified a boost in heart health during that sudden but temporary improvement in air quality.

The Louisville study represents a microcosm of what’s likely happening now with air quality and public health around the world, with the coronavirus reducing pollutants, said Ted Smith, a co-author of the Nature Health study, and a former city of Louisville innovation chief who launched the original smart inhaler study.

Cleaner air results in healthier people with a better chance to fight off new viruses that attack the lungs, said Smith, director of the Center for Healthy Air, Water and Soil at the UofL’s Christina Lee Brown Envirome Institute.

In fact, new Harvard University research indicates that the death rate from the new coronavirus is higher in counties with higher levels of fine particulate matter pollution, which also comes from coal-fired power plants.

Previously, researchers in Louisville and with Propeller Health used information from  inhalers linked to smartphones, along with data on outdoor conditions, to identify the city’s riskiest neighborhoods for people with asthma. That effort began in 2012,  and was led by Smith.

Louisville, with a mix of chemical and other manufacturing plants, rail hubs and a major cargo hub airport in the center of the city, has well-documented health disparities, dividing neighborhoods along socio-economic lines.

“This is one more piece in Louisville for recognizing the connection between the burden of diseases and environmental factors,” Smith said.

Louisville also has its own air pollution control district, and it’s seen local power plant pollution drop sharply. For example, the city’s sulfur dioxide levels decreased from a high of about 149 parts per billion at one monitor near a major power plant in 2014 to 13 parts per billion now, said Keith M. Talley Sr., executive director of the Louisville Metro Air Pollution Control District.

He said he “can’t wait” to see the results of Casey’s team’s study. “It will be incredibly gratifying to see those emission reductions translate into improved health outcomes in our community.”

InsideClimate News is a nonprofit, nonpartisan news outlet that covers climate, energy and the environment. Click here for the InsideClimate newsletter.