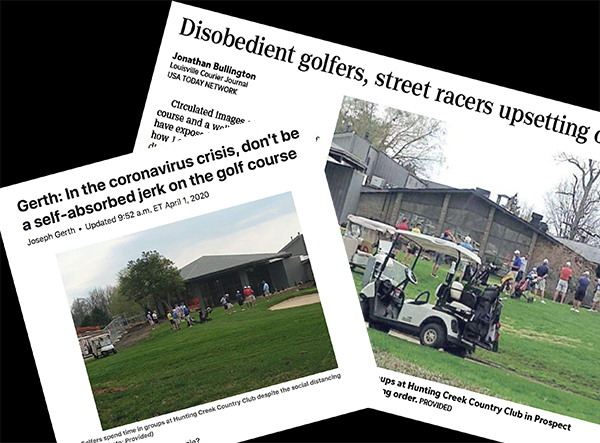 It was a tempest in the 18th hole cup, a Corona Controversy that exposed a collective, mob mentality that is only deepening as we enter day number… who knows, of Unhealthy at Home.

That widely circulated photo of golfers at a private, Prospect golf club unleashed torrents of vitriol, class shaming and pronouncements of better-than-thou from high and low.

The Courier Journal wrote in a front-page story with the photo saying it “depicts about a dozen or so golfers standing close to each other at Hunting Creek Country Club in Prospect.”

CJ columnist Joe Gerth used the photo to take swings at golfers: “In the coronavirus crisis, don’t be a self-absorbed jerk on the golf course.”

“Golf is fine,” he wrote. “But your buddy can stand 10 feet away from you when he brags about that drive he had on the 13th hole. Just tell him to talk louder. Heck, I’m sure he wants everyone to hear how he putted from 33 feet away and had his Titleist catch the rim and drop in the cup.”

The photo prompted a recrimination from Mayor Greg: “Golf is one of the few sports you can play and maintain six feet distance. But, too many people are not complying. Please don’t put me in a position to shut our golf courses down.”

Councilman Brandon Coan, apparently not a golfer, called for the city to close the golf courses and use the property as parkland. “Everyone has had to sacrifice some freedom,” he told The CJ.

But wait… Seeing cannot always be believing, especially in this Age of Photoshop.

One of those men in the photo, Joel Stanley, wrote in a CJ op-ed (published below Gerth’s sendup of golf) that the golfers had been following the rules for social distancing and using hand sanitizer… and the photo distorted the truth:

“I can assure you the group of golfers in that photograph are all very aware and concerned about our current situation. I can also tell you that no one purposefully flaunted their actions, or in any way were trying to demonstrate that we are above the rules, or simply don’t care. In fact, it is quite the opposite.”

“If you look closely at the picture you published, you can see that in almost every case the subjects are spaced out. What is not easily discernible — and understandably so since the photograph was clearly taken on a setting of maximum optical zoom, which distorts the image — is that some of the subjects were standing closer to or farther away from the green.”

“I understand the pictures look bad. If I were just to glance at them and not bother with learning any details about the situation, I too might be inclined to call the group ‘disobedient,’” he said, adding, however, that, “This is a situation where someone has overreacted to a poor photograph without all the facts.”

That is a central point.

It does not appear that anyone talked with golfers in the photo after charging them with Standing Too Close and then convening a trial to determine whether they were guilty or… guilty.

Tom Sanders, president of Hunting Creek County Club, told The CJ it was “disappointing” that members had not followed prescribed precautions. But… the story does not say whether he was there when the photo was shot or had talked with the golfers about the allegation.

In the end, the Great Golf Coronaversy seems to have turned out to be yet another example of how the Hive Mind of social media (and the news media) can unleash a swarm of mistruths that ends up stinging all of us.

Be safe out there.