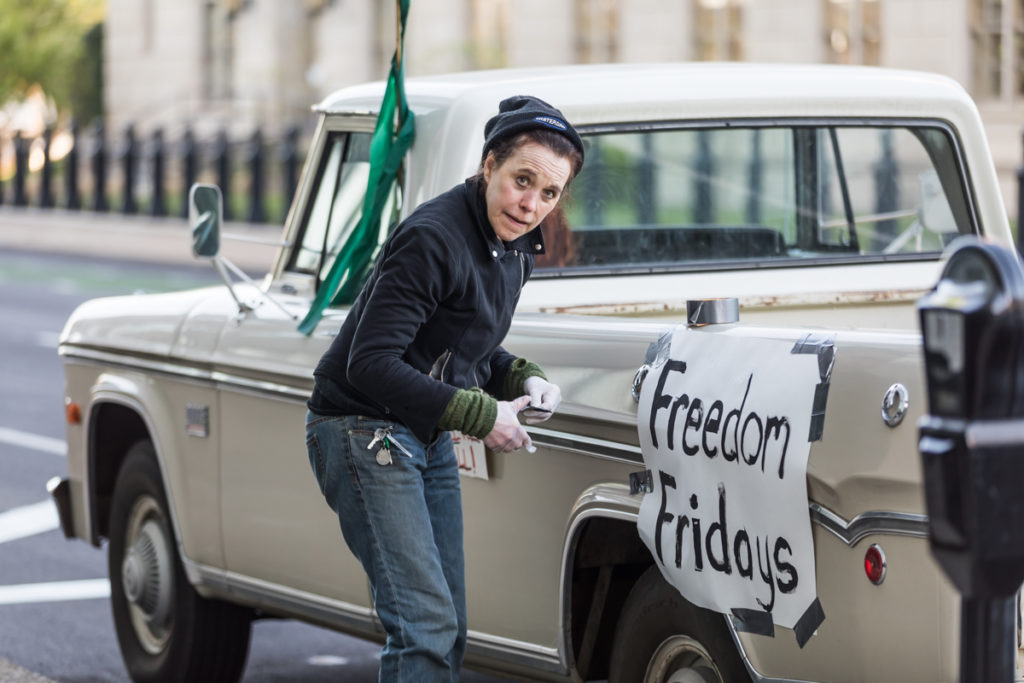 Carla F. Wallace taped a Freedom Fridays poster to the lead vehicle before the caravan began on Friday morning.

The coronavirus outbreak has upended normal life for everyone, including those in the Louisville corrections system, as well as those who work there.

Freedom Fridays vs. COVID caravan was launched to give those in jail a voice and demand that authorities take action to protect inmates’ lives. It is sponsored by Louisville SURJ, The Bail Project Louisville, Mijente Louisville, ACLUKY, The Fairness Campaign and the KAARPR.

Participants in the Freedom Fridays Caravan call on Louisvillians to contact their elected officials to encourage the release of aging and vulnerable inmates, non-violent offenders, inmates incarcerated due to technical probation violations and inmates who are financially unable to post cash bail.

The caravan’s route on Friday circled the ICE Office on Seventh Street, the Louisville Department of Corrections, City Hall and the Hall of Justice from 8:30 a.m. to 9:00 a.m. with horns blaring and cyclists blowing whistles. Signs taped on the cars and bicycles had messages such as “End Cash Bail”, “Save Lives” and “Protect Workers and Inmates.”

This weekly caravan serves as a form of protest in the age of social distancing, as participants in vehicles are told to remain in their vehicles and cyclists are told to space out appropriately. Updated information about upcoming caravans can be found on the event’s Facebook page, Freedom Fridays: COVID 19 Focus on Prisoner and Worker Safety.