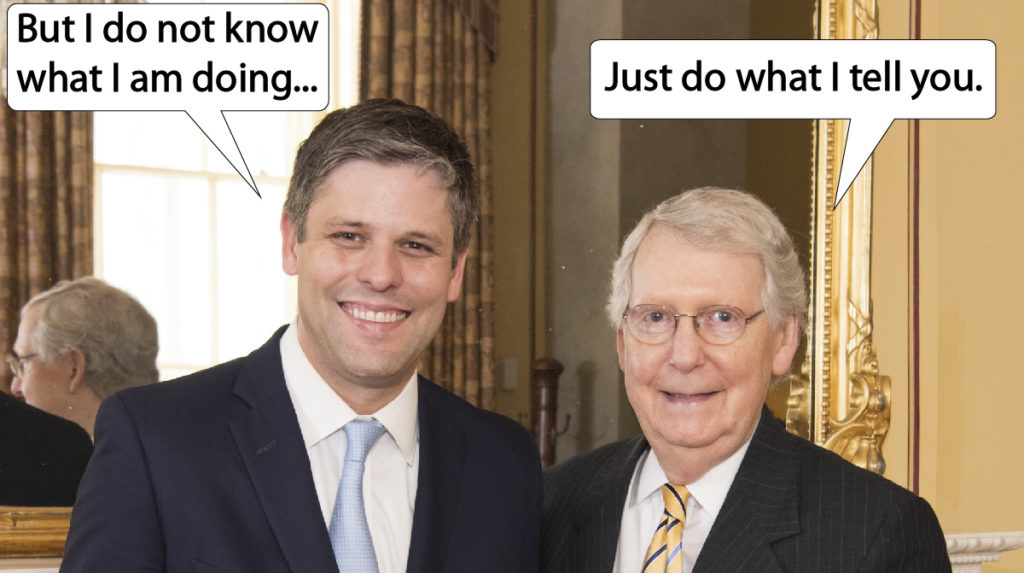 Senate Majority Leader Mitch McConnell abandoned his fellow senators last month to travel here during the epidemic to party with Justin R. Walker who was being sworn in as a judge for the Western District of Kentucky.

Today, President Trump announced he is nominating Walker to the U.S. Court of Appeals for the District of Columbia District, which some refer to as the nation’s second-highest court.

Wowza! Walker, only 37 or 38 years old and a judge for just over five months, and now this…

But even a pandemic is not going to slow the robotic efficiency in which McConnell is filling the nation’s courts with right-wing, dogmatic, sycophantic judges, many of them like Walker who are unqualified.

Who says Walker is not up to the job?

For one, the American Bar Association deemed him “not qualified.”

Before Walker won his current judgeship, the ABA pointed out that he did not have the requisite 12 years of experience practicing law (sound familiar, under-qualified Kentucky Attorney General Daniel Cameron?).

“Nominees with less than 12 years at the bar, but with substantial trial or courtroom experience and/or compensating accomplishments in the field of law, can and have been found qualified by our Committee. However, Mr. Walker’s experience to date has a very substantial gap, namely the absence of any significant trial experience,” the ABA wrote when the Senate considered Walker for the Western District seat.

“In addition, based on review of his biographical information and conversations with Mr. Walker, it was challenging to determine how much of his ten years since graduation from law school has been spent in the practice of law.”

Walker took a page from Trump’s (and Matt Bevin’s) Playbook of Petulance to defend himself.

After last month’s oath ceremony, The Courier Journal reported that Walker lambasted the ABA, saying, in part, “although we celebrate today, we cannot take for granted tomorrow or we will lose our courts and our country to critics who call us terrifying and who describe us as deplorable.”

To be fair (because what are we if not fair?), it isn’t like Walker graduated from the Offshore Drilling Rig School of Law. His pedigree includes Duke University and Harvard Law School.

And he clerked on the D.C. Circuit for then-Judge Brett Kavanaugh and for Supreme Court Justice Anthony Kennedy.

That alone should disqualify him. (In 2018, he wrote for the National Review “Judge Brett Kavanaugh: A Warrior for Religious Liberty.”)

But there is more to hate.

First, he was born in 1982, which means he would conceivably hold his judgeship for 40 or 50 more years.

He has been a member of the Federalist Society since 2006.

Yes, the same Federalist Society that McConnell has relied upon for his long game to seed the courts with young judges getting lifetime appointments. It is his legacy, or his “judges project,” as The Washington Post explained in its story: “Conquerors of the Courts Forget Trump’s Supreme Court picks. The Federalist Society’s impact on the law goes much deeper.”

McConnell, we can imagine, just about wet himself as he waxed pathetically about Trump’s choice of Walker: “He has chosen a rising Kentucky star, born and raised in Louisville, to refresh the second-most-important federal court in the country.”

So, while we all huddle in our houses, line up for unemployment and wonder why the Trump administration has so badly bobbled this epidemic response, we can be comforted by knowing that the McConnell the robot is working to make it all worse.