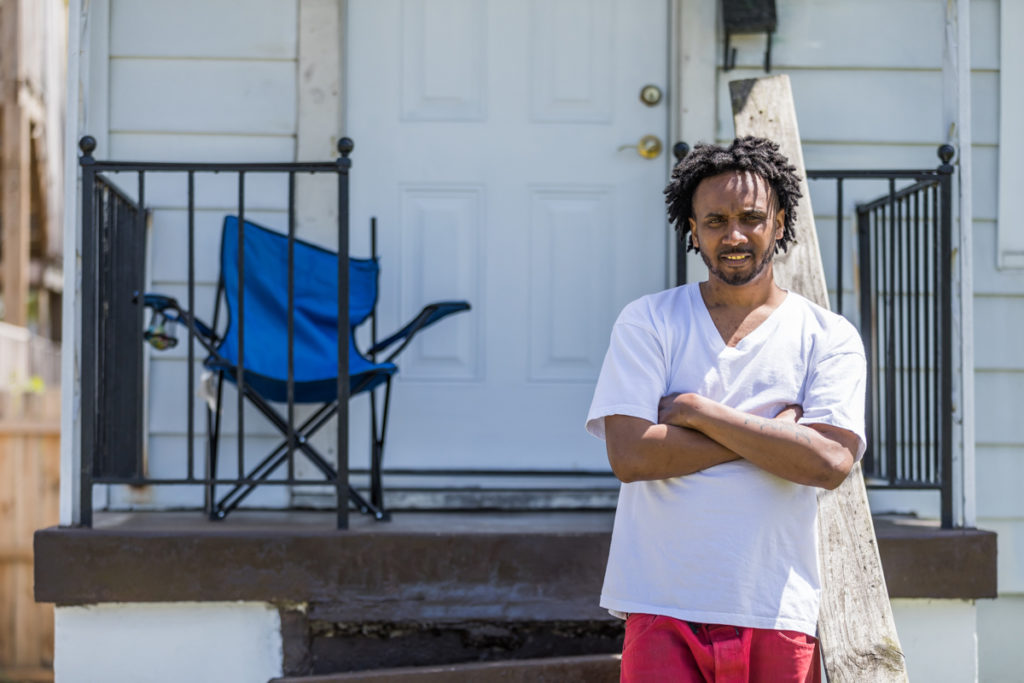 Jahara Bardue, 39, just moved to his home near Churchill Downs last month. He said he’s looking forward to Derby being held closer to his birthday in the summer. | Photo by Kathryn Harrington.

For one week in the spring, Derby consumes Sylvester Banks’ life.

The 40-year-old warehouse worker has lived right next to Churchill Downs for 10 years. Like many of those who reside in the neighborhoods closest to the track, Banks parks cars and sells food and drinks on Derby days.

He starts at 4 a.m. and doesn’t stop until midnight, directing vehicles and barbecuing ribs, steaks, sausages and more.

“I ain’t trying to get rich off this,” he said. “I just want to see people with smiles on their faces and doing what they do. That’s what Derby’s about.”

This year, the modest houses in South Louisville that, once a year, become the center of the city, will maintain their unassuming presence on the first Saturday in May, the traditional Derby date. No visitors in tailored suits and ostentatious hats will walk the streets.

Derby has been postponed for the first time since 1945, and, despite insistence from Churchill Downs that the sporting event will occur as normal in September, it’s unclear if Gov. Andy Beshear and Mayor Greg Fischer will allow the usual masses of thousands of people attend.

Metro Councilman Kevin Triplett, whose constituents include those living closest to the Downs, believes the Derby will run with spectators in the summer, but for now, he said, the postponement is a sad result of the coronavirus pandemic.

“Our signature event, the Derby, has such an impact throughout the whole city, especially right in the Churchill Downs area, in those neighborhoods right there where it’s felt, experienced and expected the most,” he said. “It’s a big loss.”

Triplett said he used to park cars and invite friends over for Derby when he lived closer to the track from 1990 to 2010.

THE NEIGHBORHOOD VIBE CHECK
On a sunny, weekday afternoon a week before Derby was originally scheduled, a few South Louisville residents sat on their front porches to enjoy the nice weather while socially distancing. They discussed how they normally honor Derby week  — some look forward to the event every year, while others avoid the crowds or get out of the neighborhood. For those who embrace the revelers and hubbub, the loss of the event is necessary but emotional.

Logan and Vicki Price, both in their 50s, have parked cars for 30 years, doing so at their houses on Queen, Bohannon and now Oleanda avenues.

“It’s a big thing for the neighborhood,” Vicki said. “Everybody gets neighborly. Everybody parks cars, they grill out, they greet all the tourists. It’s just beautiful. I like the glamour of it.”

Some people have been coming to the Prices’ lot for years. They have their cell phone number, and will call them in advance to reserve a spot. One returning customer is a limo driver who travels from Georgia to shuttle around his clients who fly to Louisville.

The Prices keep how much they make every year private, but it’s a “nice” sum of extra money, and the loss this May is especially painful because Vicki is on short-term disability. She has a herniated disc, and she has to wait for elective surgeries to start again in Indiana before she can go back to work. And Logan has a permanent disability.

Banks said that the money he makes during Derby is a perk. “Everybody needs a little extra.” More than anything, he said he enjoys the people watching and seeing others taste his food. While he barbecues, his wife, Tammy Baker, 53, cooks baked beans, potato salad and macaroni and cheese. After Banks finishes, early in the morning, he has some fun himself at his neighbor’s annual party.

But, he understands why officials postponed the Derby. “It is what it is,” he said. “I’m not trying to get no cooties.”

Not everyone likes living in the neighborhood during Derby.

Banks’ friend and neighbor, who gave only his first name, Jacori, said that he and his wife leave the street during Derby.

“Yeah, we can’t be down here,” he said. “It’s too hectic, I’m claustrophobic. I don’t like being around a lot of people. She don’t either.”

The Walker family, which lives a couple blocks away on Wizard Avenue, spend Derby weekend indoors, avoiding the crowds.

“Usually it’s just a bunch of people in the area,” said Dezaray, 25. “It gets kind of annoying.”

Laura Walker, 45, Dezaray’s mother, grew up in the neighborhood. As a kid, she remembers her family throwing parties and barbecuing. But, Derby isn’t the same anymore, she said. Two years ago, the city changed its traffic plans for the Churchill Downs area, cutting off some streets that used to be parking hot spots, Laura’s included.

“Even if I wanted to park cars last year, I couldn’t,” she said.

There have been other changes and proposals in recent years that have frustrated some residents. Churchill Downs began buying up mass amounts of property in 2017 and recently proposed closing a part of Fourth Street to accommodate for expansions to its backside and parking lots.

Triplett said he knows residents who don’t have “Derby fever,” but he thinks they’re the minority.

And even though Derby is not happening this weekend, some residents like Banks still plan to have a good time (although Triplett warned against gatherings among those not quarantining together).

“I’m cooking the first Saturday of May, just like Derby,” said Banks. “I’m not stopping. Might even let off fireworks I have back in my garage. It’ll be a celebration regardless. If the track shut down, I don’t shut down.” •