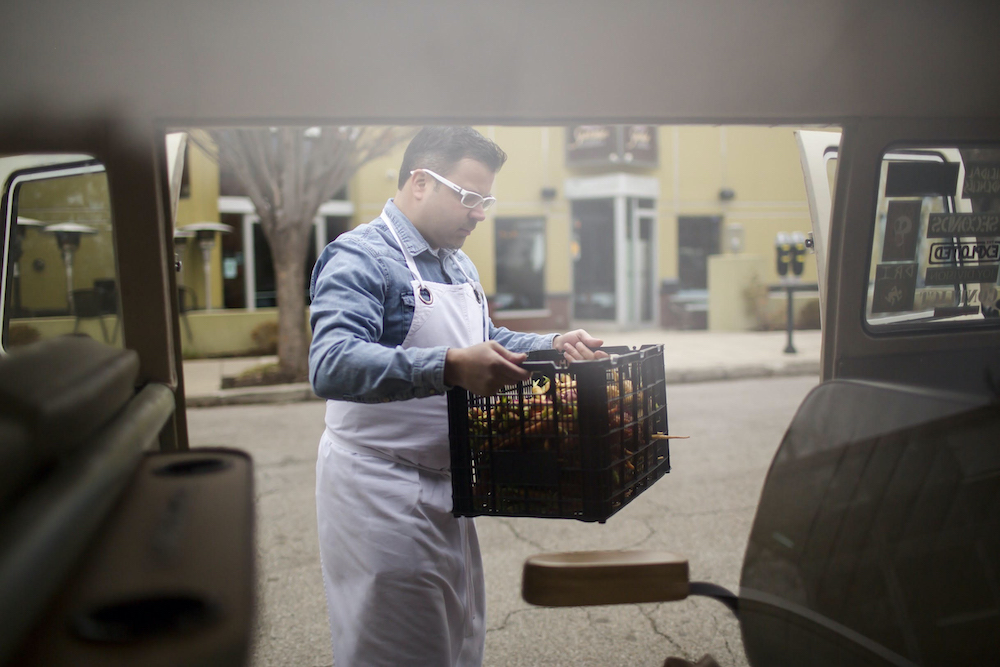 ‘We’re going down a river and hanging onto a log right now,’ said Chef Anthony Lamas of Seviche - A Latin Restaurant.

Chef Anthony Lamas opened Seviche, A Latin Restaurant in 2005 in The Highlands, and it was and has continued to be a huge hit with locals and tourists alike for its melding of Latin and Southern culinary influences. However, Seviche is a fine dining establishment that opens only for dinner — it was never an operation built to last on carryout service.

But since Gov. Andy Beshear mandated on March 16 that restaurants close their dining rooms until further notice, Lamas has simply been finding a way. Seviche posted a pared-down, carryout menu on social media focusing on favorites that, as Lamas put it, “travel well.”

In addition, the restaurant has begun making box lunches for large groups — usually 20 or more — to help feed its needed income stream. Meanwhile, he and the restaurant’s investors have pledged to pay all employees for six weeks, hoping there will be some relief not far behind.

“We’re going down a river and hanging onto a log right now,” Lamas tells LEO Weekly. “We’re just hoping this will get us to the end.”

Other area restaurants are getting similarly creative, as the end of the global coronavirus pandemic still is not in sight. Restaurants across the area are doing what they can to keep people fed with more than just frozen pizzas from the icebox and to create work for as many of their employees as possible. Depending on the length of the shutdown, it’s anyone’s guess how many independent restaurants and bars will be forced to permanently close, ultimately altering Louisville’s vaunted culinary landscape.

Some, such as Floyd County Brewing Co. in New Albany, are creating family dinners for carryout. Others are offering local delivery or discounted gift cards, package liquors and now even cocktails to go in order to help create revenue while the city remains under coronavirus’ grip.

Others, such as Kaiju and River House, have opened temporary bodegas where people can get meats, produce and other items.

Some restaurants, however, are doing fairly well considering the circumstances.

River Road BBQ has a small dining room featuring a handful of tables, but most of the business transacted there is carryout. With people now eating at home exclusively, owner Jon Gudmundsson said he’s actually seen a bit of an uptick in sales of meats and sides by the pound.

Because of the size of the restaurant, only two people are allowed inside at once, with proper spacing, while anyone who doesn’t want to get out of their car can request curbside service. And, Gudmundsson said, other than disinfecting anything customers touch, such as door handles, there really hasn’t been a need for additional cleaning or sanitation: “We do that anyway.”

In fact, he theorized that getting carryout from his business or any other reputable food concept is potentially a better idea than going to the supermarket to stock up. For one, it’s far more difficult to contain the spread of germs in a large market where people are roaming freely, he said.

“Everybody I know in the industry is limiting the amount of people who can come in” to their business, Gundmundsson said. “So rather than going and buying frozen, pre-prepared food, go to a local restaurant and get something that actually tastes good.”

Red Hog: ‘We need to be ready’

Red Hog, the unique butcher-shop-meets-restaurant concept in Crescent Hill, naturally had to scale back the restaurant portion of the business but has kept the butcher shop open, offering curbside service for those who don’t want to come inside. To help augment lost income from dine-in patrons, a carryout menu featuring primarily sandwiches and salads remains available from the restaurant, in addition to such grab-and-go meals as soups, salads, take-and-bake pizzas and sandwiches from the butcher shop, as well as complete rotisserie chicken meals for four.

“We said, ‘We need to start thinking about what happens, and we need to be ready for that,” Paynter said. “We had plans in place, for the most part.”

For a business such as Saints Pizza Pub in St. Matthews, it’s a different proposition.

Saints does carryout sales and recently began offering online ordering, but the pub operates as a sports bar much of the time. Coronavirus’ timing was, to put it mildly, not ideal.

“The timing was terrible because of March Madness,” general manger Bruce Jarrett said. “That’s our biggest month of the year.”

Instead of celebrating the NCAA tournaments, Saints is keeping as many employees working as possible by spending extra time on cleaning, remodeling and other projects that had been pushed back for various reasons. As for sales, while Jarrett said they are also selling carryout alcohol, it’s not the same.

For instance, he notes, while he doesn’t make much profit on the wings he puts on special for March Madness, it’s still a huge boost because margins on alcohol sales are significantly higher.

“They’re going to sit there for four hours and drink beer” while eating those wings, Jarrett said.

And when it is over?

So, the question is, when will this all end? What will be the ultimate fallout? No one knows, especially because independently-owned small restaurants don’t typically operate with a surplus of funds.

According to a New York Times article, The National Restaurant Association estimated in the early days of the shutdown that the entire restaurant industry would lose $225 billion over the next three months and lose five to seven million employees.

“I’m scared,” Lamas said. “I hate to say this, but I bet 50% of restaurants won’t make it. I hope we can hang on for six weeks, eight weeks. I don’t want to think of after that.”

Gundmundsson’s estimate was a more-conservative 30%, but he admitted it is a “wild guess.” The circumstances for many of these businesses is particularly treacherous, he pointed out, because owners and managers are being forced to rethink their business models on the fly, learning new processes and systems along the way.

“The problem is, if you’re not known for carryout, then you start doing it, people don’t even think about you,” he said. “You’re trying to change a mindset in two weeks, and that’s not easy to do.”

Red Hog’s Paynter said while the business in the butcher side of the business has been up, the losses from the restaurant side have been felt. Even with a week’s head start on the shutdown, he and his team are continually brainstorming new ideas. Asked if he feels confident in Red Hog’s sustainability under the circumstances, he balks at a definitive answer.

“I definitely don’t feel good,” he said. “I’m not sure exactly how, long term, but we’re going to ride it out as best as possible. It’s definitely the unknown in front of us that’s kind of scary.”

This only underscores the importance of patronizing independent restaurants as much as possible during the shutdown — to give them a fighting chance to ride it out, to hang onto that log until they get to the end of that river, to harken back to Lamas’ analogy.

Jarrett said Saints is financially prepared for such a disaster, but the business is the exception.

“We’ll be here 10 years from now,” Jarrett said, “but I’m a little worried about my neighbors.”

And for those who support independent restaurants and are looking forward to returning to their favorite spot for celebratory meal when all this is over, Jarrett said, it’s important not to wait.