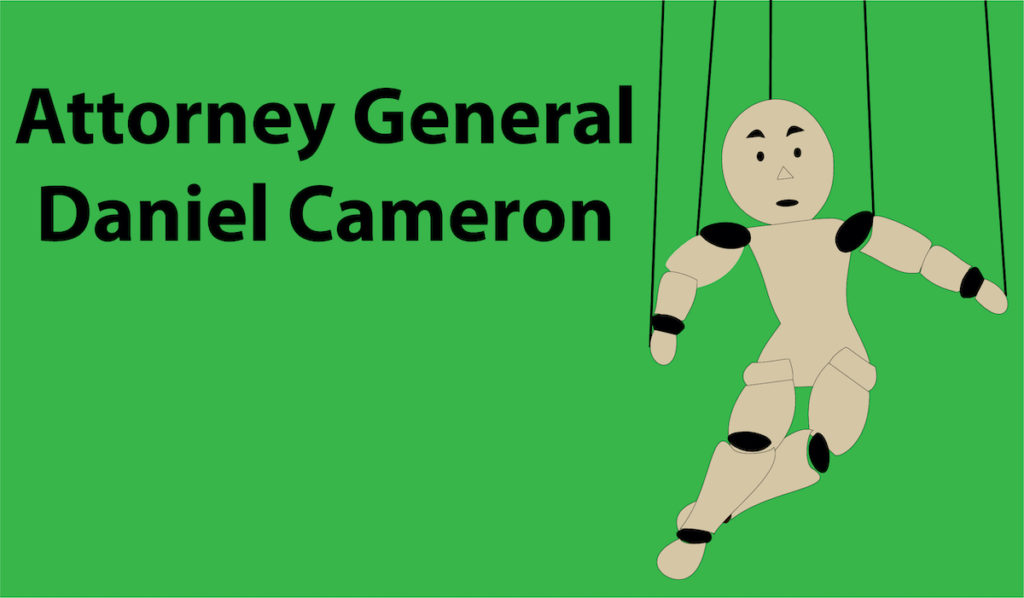 Oh, you can just imagine the fingers flying as emails and calls blew up the AOL inbox and clamshell phone of Kentucky Attorney General Daniel Cameron.

“You are the attorney general! Just Do Something about him!”

“I put you in that office. I need you to step up and do something about him, like he… just like he used to go after Bevin!”

Elephantine, Republican pressure surely is being applied to Cameron to do something… anything… that will dull the sparkle that dastardly Democratic Gov. Andy has rightly earned for his handling of the pandemic.

After all, U.S. Sen. Mitch McConnell had installed Cameron (his former legal counsel) as attorney general, one in a long line of unqualified lawyers the senior senator is pushing into office and onto benches around the nation. (We are looking at you Justin Walker, a judge for just over six months whom McConnell has nominated to the D.C. appeals court, what some call the second most-influential court in the country.)

It all suddenly became embarrassingly public (embarrassing for the Republicans) when a handful of protesters marched on Frankfort on Saturday, April 25, not to dun and harass Gov. Andy, at least not directly, but to exhort Cameron to stop Gov. Andy from trying to save lives.

“David Cameron is a coward,” one of the speakers yelled.

(Certainly, they were not referring to former British Prime Minister David Cameron. And we hope they were not thinking of David Cameron’s “Piggate,” which seemed to have informed the first episode of “Black Mirror.” The creator denies being influenced, however.)

The protesters told The Courier Journal they had even considered protesting outside Cameron’s home and church.

Then, on Monday, former McConnell advisor Scott Jennings, a Courier Journal columnist and PR pro, squeezed the vice tighter with his op-ed and revealed the GOP’s strategy: “In coronavirus fight, Beshear has crossed the line with questionable restrictions.”

“Two things are true,” he wrote. “When you give politicians more power and fawning media attention, it almost always goes to their heads. And the impulse to impose authoritarian policies is never higher than in an emergency, like the coronavirus pandemic.”

Finally, on Tuesday, Cameron leapt into action like a marionette! Huzzah!

Cameron took to the steps of the Capitol to threaten Gov. Andy with a lawsuit over “his order prohibiting churches from holding in-person services.” (He also is challenging the governor’s request that Kentuckians not travel out of state and to self-quarantine if they do so.)

Said Cameron: “Specifically, the governor should allow churches to resume in-person services consistent with the Constitution and CDC guidelines, and if he doesn’t, we will be forced to file a lawsuit and allow a judge to determine whether his order as it pertains to religious views is constitutional.”

At Wednesday’s Gov. Andy’s Can I Get A Witness Briefing and Saving Lives Session, he said in-person services would be allowed starting May 20 but with reduced participation and with social distancing!

On Tuesday, he patiently answered a question about Cameron’s assertions:

“Today he said I have a specific order that bans,” he said with a furrowed brow, “church services. No, we ban all mass gatherings. No one is singled out at all there. And my comment to it, in both cases we have had an early ruling by a judge, indicating they are likely to rule that everything we have is legal.”

Here is Gov. Andy’s order, which says: “All mass gatherings are hereby prohibited. Mass gatherings include any event or convening that brings together groups of individuals, including, but not limited to, community, civic, public, leisure, faith-based, or sporting events; parades; concerts; festivals; conventions; fundraisers; and similar activities.

But Cameron said he finds a contradiction. People are still allowed to shop but not worship, he said, so how is that fair?

“I am reminded of this every time I drive past a big box store and see dozens of cars,” he said.

Certainly, Cameron has to see the difference between crowding into a room to sit elbow to elbow in front of a fire-breathing preacher… and shopping for nails, mulch and tomato plants, no?

Gov. Andy,  who sprinkles his religiosity throughout his briefings, said he wants to assure Kentuckians that worshipping is alive and well here but just not together in a building:

Cameron next objected to Gov. Andy’s order that police take down license plate numbers so health departments can tell the corona-congregants they need to keep their contaminated selves to themselves.

“I am also reminded every time I read that the governor has ordered law enforcement to record the license plate numbers of people who simply want to worship and practice their faith. Friends, churches deserve equal treatment commensurate with their First Amendment rights,” Cameron said.

Right… here is the part of what he said that lets you know Cameron is grandstanding.

He said his threat to sue is really just over principle, not necessarily practice:

“Lest there be any confusion, I am not here today to advocate that churches resume in-person services immediately. I believe the good Lord gives us wisdom and judgment. We should use it in such a way that we protect our fellow Kentuckians. I personally enjoy online services offered by my church and applaud all faith leaders for their creativity and adaptability over the past several weeks. I have faith that Kentucky’s religious leaders will listen to healthcare experts — when is the appropriate time to resume in-person services, and when they do so, I know they will be responsible.”

So, to recap: He doesn’t advocate for in-person services that could kill you, but he wants people to have the right to attend in-person services, even if it kills them. That way, when people start attending church and getting sick, he can say he never told them to do so.

As for Gov. Andy and how he is holding up against Republicans who are desperately trying to have an opinion that distinguishes them from Democrats, he said he can’t be doing that:

“We just want to make sure we save as many people’s lives as possible, and I am not going to get into a back and forth with anyone. I am done with politics. I am not worried about any decisions that help or hurt me politically or help or hurt anybody else. I just want to get through this by losing as few people as possible.”

When Cameron was asked whether the David Cameron Protesters influenced his decision to issue his empty threat, he said only: “I want people to know that those remarks and comments and those emails and phone calls that we’ve received in this office have not gone on deaf ears,” The CJ reported.

Oh, you can just imagine the emails and phone calls blowing up his AOL inbox and clamshell phone.