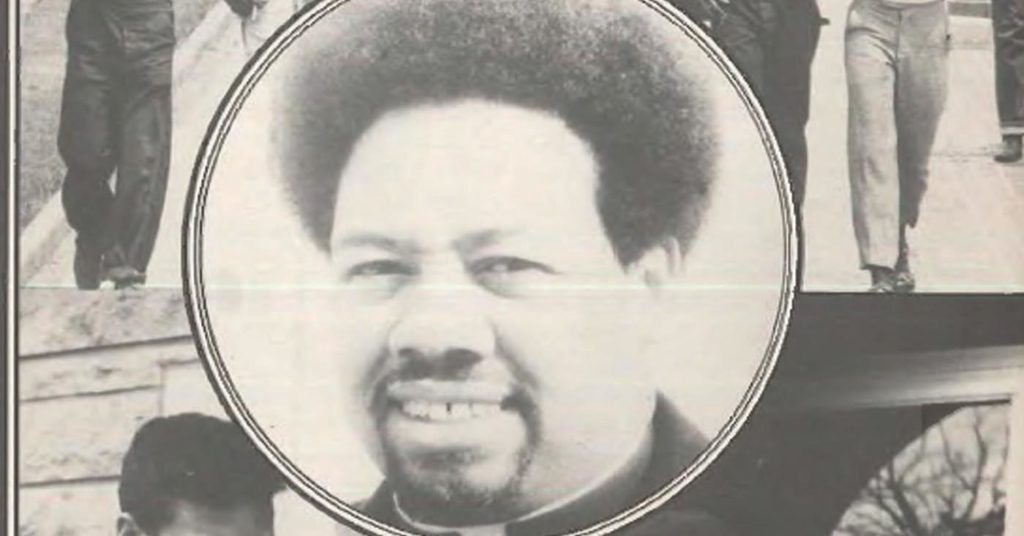 It was his fervent hope that Black Scene would provide a continuous voice for our community to communicate ideas, to stimulate progress and to inspire our people. He meant it to play a vital role in the removal of those elements within our society which perpetuate human indignities, racial segregation and social injustice. We have lost a friend and the community has lost a dedicated and humble servant.

Reverend Leo Lesser, Jr., was born April 21, 1928, at Indianapolis, Indiana where he completed elementary school and was graduated from Christopher Attucks high school. He completed his undergraduate studies in theology at Burton College and Gammon Seminary in Colorado. He earned master and doctorate degrees from Free Protestant Episcopal University, London, England. He had completed special studies in literary education, gerontology, police training, and community functioning and in mental health. He was the author of “Ministry for Mental Health,” “A Program For The Church and Its Senior Citizens,” and “In Times Like These,” among several other important papers and publications. He had pastored several churches in Kentucky and Tennessee, in Louisville, the Greater St. James AME and Community Methodist Churches. He had conducted revival services in London, England and had led preaching missions in Germany and in France. Though best known as a clergyman and civil rights activist, Reverend Lesser was a scholar and educator of note abroad as well as at home. He had held a professorship at Chattanooga City College and had spent several years at the International Institute of Languages. In Louisville, he opened the St. James Literacy Center where several hundred adults would learn to read and write for the first time. Many have credited this training as having secured them better jobs. He later initiated a similar program in Nashville, Tennessee.

Doctor Lesser’s work in civil rights is widely known history and little can be added here except to clarify his position. He was totally committed to the realization of the American dream for all Americans and especially to equality of opportunity for his own people. But, he did not share the view that integration is a necessary goal. Such a belief, he felt, betrayed a lack of confidence in the talents and capacities of the black community and suggested that all black or mostly black communities could not do the job. He thought it to be acceptance of the conclusion, for example, that a school attended and taught predominantly by blacks, was inferior and incapable of producing competitive men and women. In corroboration of his premise, one needs only to be reminded that Lesser’s own preparation along with countless of his black contemporaries had begun in an all-black or nearly black environment.

Law enforcement and penal reform were among his widest interests and were the principal reasons for him accepting a position as chaplain of the local jails. He was not merely a chaplain or a counselor to prisoners, he was an innovator of processes to improve their conditions and to facilitate their rehabilitation.

As he had intimated to those of us closest to him, his failure to win elective political office was his greatest disappointment. He had resigned from an attractive and comfortable position as Associate Director of the Human Relations Commission to enter the 1973 Mayoral primary. He finished a mere 3rd and had captured fewer than 6000 votes which meant that he had failed to carry his own community. The community he had loved and to which he had given so much of himself had twice rejected his efforts to lead them. The parents whose sons he had kept out of jail, the unwed mothers he had assisted in getting relief payments, the illiterates he had taught to read and write and those for whom he had found jobs all had turned their backs. The community had been even less generous with financial support than with votes. He simply had counted too heavily on his beloved black community with which he had so closely identified. During the entire campaign, he made few overtures toward the well-to-do blacks or those with influence. In the event he had won, he wanted to owe no political favors. He wanted to be accountable only to the public to whom he had made pledges to improve the quality of life, provide better fire and police protection, ease the burden of aging and to exhaust all possible means to eradicate poverty, hunger and ignorance. The only source of real pride to him was that his beloved young people did not forsake him. They remained with him to the end, selling raffle tickets and standing on the corners soliciting dimes, nickels, and pennies.

Seemingly as if by design, the so-called leaders of the black community, including many clergymen, withheld their support. They reasoned that it was too early for a black to run and that he would only siphon off the vote to increase the chances of the candidate considered to have been less favorable to the black community. Of still greater disappointment was the meeting he had with a group of unnamed self-appointed black envoys, who had come prepared to make a deal if he would drop out of the primary in order that their man would be ensured of the vote that Leo would siphon off if he remained in the race. Needless to say, he made no deals and was badly beaten in the primary. It did not leave him embittered or angry but he was deeply hurt over the lack of support and interest of his own people. Once he had lost he openly considered supporting C. J. Hyde, the Republican candidate, though he did not consider Hyde to be particularly astute, he did believe him to be a decent, honest and fair-minded man whose judgment he trusted. His respect for Hyde was evident as he spoke well of him before, during and after the campaign.

In retrospect, Leo’s style, manner and his philosophy did not fit in a political platform or party of any shade. He was too good and warm-hearted. He was too unpretentious in manner and too unobtrusive in style. He was preoccupied with finding ways to remove conditions that bred crime, poverty, and racial segregation and social injustice.

A good man has passed and for all that he had done for his country, his people, and for his God, the reward is yet to come and from a far greater leader than earthly kings or noblemen. Black Scene’s tribute to Leo Lesser, Jr. is to rededicate ourselves to those very same principles which he believed were so essential to the betterment of mankind. •