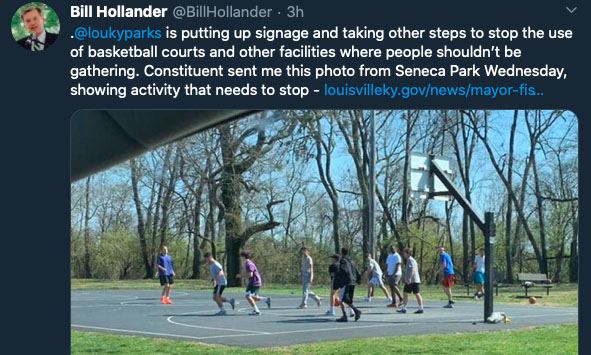 I’ve made it a priority to try to get the park every day during this horror movie of a spring. The Metro Parks are some of the last connections we have to normalcy right now, and, honestly, it’s just nice to leave my phone at my apartment and distance myself from social media. In the parks, most people have been cognizant and diligent and safe, but there’s a select few who are still playing sports, still gathering in packs, still not giving a shit.

Don’t be those people. Those actions could get more people sick, and they could instigate stricter measures from the government. Don’t play ball, don’t hang out in large groups, don’t sit in circles and badly play guitars. Go for a run, take a walk with a friend, but be smart. We all want the parks to stay open. But, more importantly, we should want to keep people safe.

Update: On Thursday, Mayor Fischer announced that the city will remove all city-owned nets and rims, and soccer goals will also be locked up.

“I’m upset about this because people are putting the lives of others in danger,” the Mayor said, according to a press release. “When you play basketball, tennis, soccer – anything where you’re standing within six feet of anyone – you are risking the lives and the health of friends, relatives, and fellow Louisvillians, as well as your own. It’s selfish. It’s shortsighted. And it’s unacceptable.”