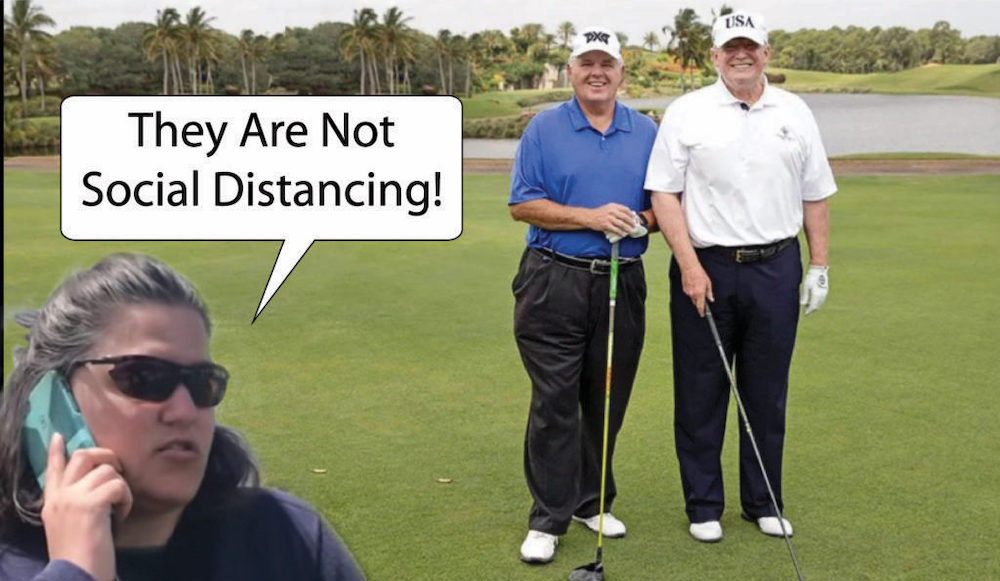 It is beginning to feel a lot like a “Twilight Zone” episode about how something bad happens in society, government seizes control — and then gets us to report on our neighbors.

Or maybe this actual one: “The Monsters Are Due on Maple Street “(1960), which is about how a blackout fosters suspicion among neighbors and ultimately turns them against each other.

Of course, these shows were parables for the times, the Cold War.

But, now, here we are: Gov. Andy and Mayor Greg, our grand and august leaders, have each said the state of Kentucky and city of Louisville are awaiting your reports of businesses not practicing social distancing and of other instances of  “non-compliance.”

The website for the state hotline says it was created so “citizens can report large gatherings or establishments that are not in compliance with directives.”

“If you are aware of large gatherings or establishments that are not complying with the state’s orders, work-from-home instructions, or social distancing procedures, please visit the “Report Non-Compliance” page, which allows citizens to report an incident …”

The city wants you to call 311 (so, basically you might as well shout your complaint into a wall).

Mayor Greg tweeted: “Thanks to the majority of our community for staying home & practicing social distancing. Unfortunately, some haven’t gotten the message. Please, stay home unless it’s necessary!”

And, then, he directs you to a YouTube video from LouisvilleMetro TV that shows people in parks using verboten playground equipment and congregating closely.

Watch the video! Maybe you will see yourself getting a tan in the park!

One person commented on this vid: “Have LMPD tear gas those idiots. Not kidding.”

But, if you are not into government snitching, don’t worry: Social media gives everyone a chance to publicly call out violators and shame them into submission on your own!

Just over the weekend, keyboards and touch screens across the land were atwitter, so to speak, about how a private golf club seemingly allowed golfers to congregate. There were even photos.

Courier Journal reporter Phillip Bailey, a prodigious tweeter (Philmonger @phillipbailey), was all up in the story. When someone criticized the twitter policing as “social media tattling,” Philmonger replied:

Sucks when it’s your community being policed, huh?

I guess we should stayed focused on #LouWestEnd pickup basketball games or street racing.

Bailey’s tweet, then, brings up issues of socioeconomics, perhaps class and race.

At least in literature, class often becomes a character in pandemics and plagues.

Or so writes Jill Lepore, in her fabulous New Yorker piece “What Our Contagion Fables Are Really About.” The story’s subtitle: “In the literature of pestilence, the greatest threat isn’t the loss of human life but the loss of what makes us human.”

“The great dream of the Enlightenment was progress; the great dread of epidemic is regress. But in American literature such destruction often comes with a democratic twist: contagion is the last leveller,” Lepore wrote.

That is true in the end with death.

But before then, decisions made about how to react can bring into high relief issues of class and race.

Locally, Mayor Greg decided to keep open city golf courses but close basketball courts. The rationale is that golf can be played at a distance and without touching anything that touches anyone else.

“I didn’t want to have to close public areas in our parks and was hoping this wouldn’t be necessary,” Mayor Greg Fischer said. “But too many people have shown they have yet to grasp the serious nature of this threat and were gathering in crowds in our parks and ignoring social distancing.”

As The CJ put it in its inimitably diplomatic way: “That decision, though, has raised some community concerns over equity, given that golf has historically been viewed as an activity for the affluent.”

Following social media reports of basketballers sweating over each other in the parks required tougher action.

The hoops came down.

Yet, after this latest golf club transgression, the links have remained open.

Golfers are more responsible than ballplayers?

Y’all act like golfers don’t have locker rooms and country clubs where they congregate.

This is an incredible stretch folks are doing to exempt a certain group but not others and it is becoming very transparent.”

And: “Just waiting to see if Prospect is held to the same health standards as #LouWestEnd.”

For his part, Gov. Andy cautioned that golf courses might be closed if problems persist. And, he warned, that The Big State would be watching (our words, but on point).

“We can’t allow any crowds in Kentucky right now. So, we are going to ask, again our mayors and county judges, and we as a state are going to be sending folks out, where social distancing is not being followed, we are going to have to close golf courses and other places like it down,” he said during Sunday’s 5 p.m. What I Did on My Coronacation Slideshow with Andy.

He then said that callers were now warning him about home improvement stores not working to improve our collective health:

Now, for all of you out there who just love to sit by your police scanners and ask to speak the manager — if you want to be a Corona Cop, The CJ has a story for you: “How to report people who are breaking social distancing rules amid coronavirus”

So, how soon before we all live on Maple Street?

At the end of the Twilight Zone episode, Martian No. 1 looks down at the chaos below on Maple Street and says: “Throw them into darkness for a few hours and sit back and watch the pattern.”

“And this pattern is always the same?”

“With few variations. They pick the most dangerous enemy they can find, and it is themselves. All we need do is sit back and watch.”