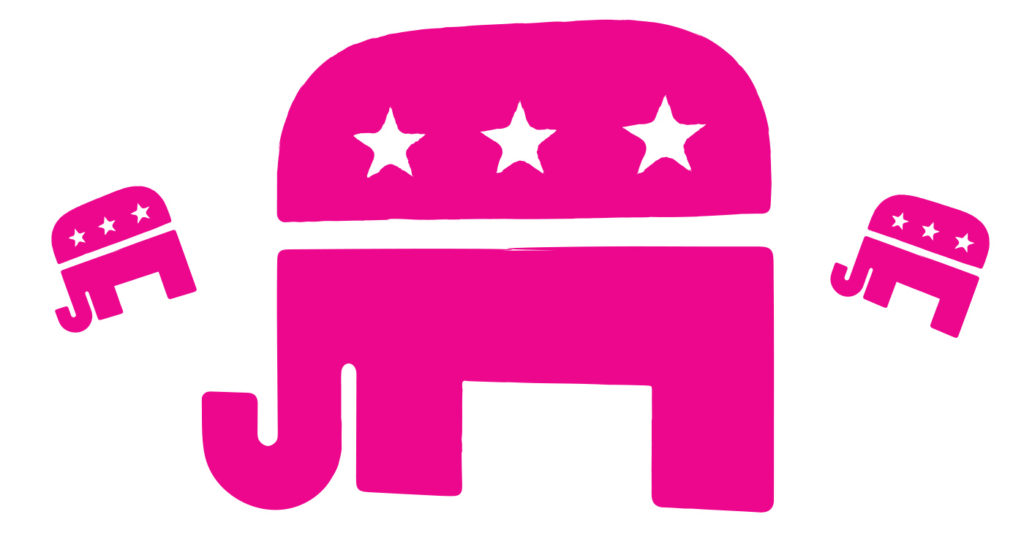 I remember when my French teacher found out that I was a member of the Young Republicans group in high school. He saw it in the yearbook and asked me about it quizzically, and when I told him that I was a devout Republican, he smiled and said, “No, you’re not.” I didn’t let that sway me, but the memory stayed with me. He knew my heart.

I registered Republican as soon as I could legally register to vote. I came from a hyper-conservative Christian upbringing. I went to various Republican events as a young woman. I started out my adult life voting Republican. We give the internet and social media a lot of crap for not being as useful as we would have hoped but… without it all, I’d still be pretty much in the dark about what goes on in our government, world politics and the issues people face that I’m protected from by my culturally acceptable appearance and choice of religion and marriage.

When I started out voting Republican, I started doing what I saw as my civic duty; I researched the candidates. I went down a rabbit hole of voting records, bill sponsorships and campaign donations. I spiraled down a path of reading through public records detailing government spending and reports from independent watchdog groups citing irresponsible bookkeeping (that never made it into mainstream discussion). I came out of that tunnel completely horrified.

The Republicans I thought were pro veterans kept shooting down bills to expand veteran benefits, citing a lack of funds, but they would increase the military budget again and again and again, with the Pentagon engorged, wasteful and lining the pockets of contractors who contributed to some of the campaigns of those very politicians. I got to read my tax breakdowns. I looked at the sliver that went to help families in need when I was taught to be resentful of those families for relying on my money. What I found were giant corporations relying on my money. What I found was government bloat relying on my money.

The predators of my money and yours didn’t turn out to be poor families after all. They were very rich people who stayed rich and got richer on our dime and our hard work and had the gall to tell us there wasn’t enough money to go around. Thanks to social media, I listened to a diverse group of people who became more and more diverse in my efforts to find people to listen to, to learn from. For example, I didn’t understand the issues, the nuances of society, that people of color faced every day of their lives. If you’re white, I recommend joining groups on Facebook where POCs can speak freely, and I recommend you don’t say a word.

Don’t voice your own opinion.

Don’t try to be a white savior.

I’m not a fan of abortions. I’m not pro-abortion. I don’t want abortion clinics on every corner or for women to use abortion as birth control. And, you know what’s a relief? Not having to make up my mind against a false narrative but making up my mind with the facts. John Irving helped a lot there, too, philosophically. Yet, here Republicans were, voting against access to birth control, sex education and healthcare — all of the things that would actually lower abortion rates. Hmmm.

Democrats don’t have all the answers either, I know.

I switched parties because I figured out I was a bleeding heart liberal all along. Since the Republicans weren’t actually fiscally conservative or in favor of small government as they had claimed to be, I decided to leave them in the dust. I would be interested in a system with more parties to serve the important issues for more varied viewpoints.

If you’re still with me at this juncture, I needed to get all of this out to say: Talking about politics and social issues on the internet does work. I know it can be annoying. I know it’s disruptive. I know it gets heavy. I know you’ll lose friends. However, the alternative is not rocking the boat and allowing other people to live in the consequences of your apathy.

If you are white, cisgendered, heterosexual and Christian, it is very comfortable and easy to settle into a life of passionless voting and avoidance of the news, because, for the most part, your life will remain unaffected. I would urge you to empathy, to compassion, to knowledge and to anger if you’re willing to take part. Angry people are motivated people and they fix problems. Get a little mad with me (at billionaires and status quo politicians, not the downtrodden). We have so much to fix.

Kate English, 31, is a Louisville business owner and mother.