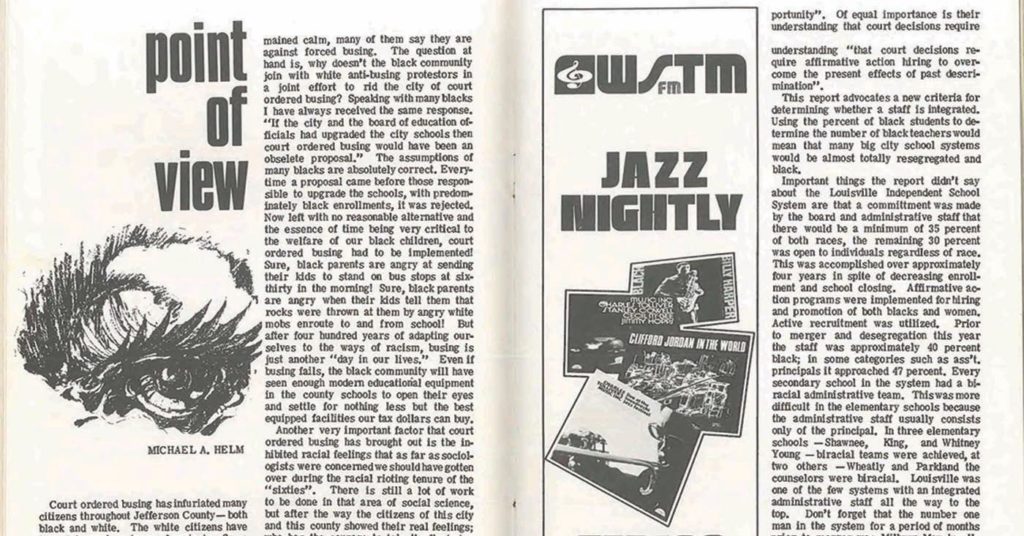 Court-ordered busing has infuriated many citizens throughout Jefferson County — both black and white. The white citizens have turned to various types of protests. Some of the protests resulted in violence and defeated their cause. While the city’s predominately black West End citizens have remained calm, many of them say they are against forced busing. The question at hand is, why doesn’t the black community join with white anti-busing protesters in a joint effort to rid the city of court ordered busing? Speaking with many blacks I have always received the same response. “If the city and the board of education officials had upgraded the city schools then court ordered busing would have been an obsolete proposal.” The assumptions of many blacks are absolutely correct. Every time a proposal came before those responsible to upgrade the schools, with predominately black enrollments, it was rejected. Now left with no reasonable alternative and the essence of time being very critical to the welfare of our black children, court-ordered busing had to be implemented! Sure, black parents are angry at sending their kids to stand on bus stops at six thirty in the morning! Sure, black parents are angry when their kids tell them that rocks were thrown at them by angry white mobs en route to and from school! But after four hundred years of adapting ourselves to the ways of racism, busing is just another “day in our lives.” Even if busing fails, the black community will have seen enough modern educational equipment in the county schools to open their eyes and settle for nothing less but the best equipped facilities our tax dollars can buy.

Another very important factor that court-ordered busing has brought out is the inhibited racial feelings that as far as sociologists were concerned we should have gotten over during the racial rioting tenure of the “sixties.” There is still a lot of work to be done in that area of social science, but after the way the citizens of this city and this county showed their real feelings; who has the courage to take the first step towards a lasting peace? Busing is either four hundred years too late or four hundred years too early! Of equal importance is their understanding that court decisions require understanding that court decisions require affirmative action hiring to overcome the present effects of past discrimination.

This report advocates a new criteria for determining whether a staff is integrated. Using the percent of black students to determine the number of black teachers would mean that many big city school systems would be almost totally resegregated and black.

Important things the report didn’t say about the Louisville Independent School System are that a commitment was made by the board and administrative staff that there would be a minimum of 35 percent of both races, the remaining 30 percent was open to individuals regardless of race. This was accomplished over approximately four years in spite of decreasing enrollment and school closings. Affirmative action programs were implemented for hiring and promotion of both blacks and women. Active recruitment was utilized. Prior to merger and desegregation this year the staff was approximately 40 percent black; in some categories such as asst. principals it approached 47 percent. Every secondary school in the system had a biracial administrative team. This was more difficult in the elementary schools because the administrative staff usually consists only of the principal. In three elementary schools — Shawnee, King, and Whitney Young — biracial teams were achieved. At two others — Wheatly and Parkland — the counselors were biracial. Louisville was one of the few systems with an integrated administrative staff all the way to the top. Don’t forget that the number one man in the system for a period of months prior to merger was Milburn Maupin. He had come up through the ranks to the post of superintendent of the Louisville schools.

An affirmative action policy for promotions is of great importance to black teachers to enable them to move into the administrative ranks where decision making affects so many. Only then will the educational system take on the multi-ethnic appearance necessary to meet the needs of our society.