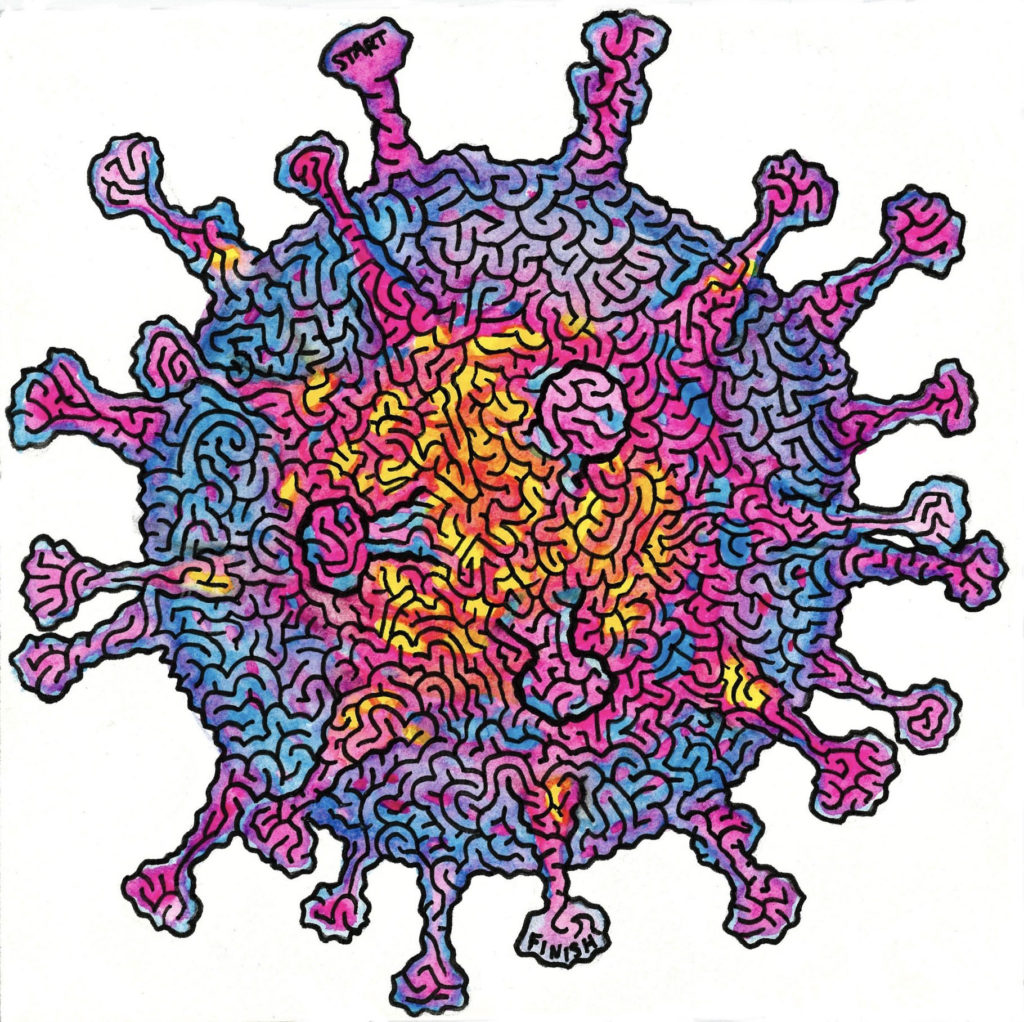 You know how drinking games work. You get the pleasure of a good buzz or blackout drunk while satisfying that need to justify why you are getting a good buzz or blackout drunk. The LEO Coronavirus 2020 Drinking Game is similar to that, but this version is for a subject a bit more serious than, say, a Trump speech (“Chiiiina”) or how many times Jesse says “bitch” on “Breaking Bad.” And, to play, you will need a veritable bar full of liquor and beer, but you can substitute what you want because we expect a run on liquor stores now that the grand and august governor has closed all bars in Louisville (we actually think that is a good move). So, let’s get to playing and drinking!

Drink a Brown Note Ale from Against the Grain Brewery and Smokehouse if:

You are one of those idiots who bought a forest worth of toilet paper even though the virus does not make you go any more than regularly, so to speak.

Drink a Corona (we couldn’t resist) with a wedge of lime if:

You actually have the disease, because what goes better than coronavirus than lyme disease?

Drink a Red Bull with an Adderall chaser for every time:

tRump tries to downplay the severity of the outbreak, like when he said: “The Democrats are politicizing the coronavirus. One of my people came up to me and said, ‘Mr. President, they tried to beat you on Russia, Russia, Russia.’ That did not work out too well. They could not do it. They tried the impeachment hoax. … They tried anything. … And this is their new hoax.”

tRump is contradicted by one of his staff or an expert in the medical community, like when Dr. Anthony Fauci disputed Herr Donald’s assertion that “testing has been going very smooth.” Fauci said: “The system is not really geared to what we need right now, what you are asking for. That is a failing. Let’s admit it.”

tRump contradicts one of his staff or experts in the medical community, like: “Now, this is just my hunch, but based on a lot of conversations with a lot of people that do this, because a lot of people will have this and it is very mild … ”

tRump says something so wacky that gets you sober, like: “It’s going to disappear. One day, it’s like a miracle, it will disappear”

Drink the entire bottle of Pappy Van Winkle 15 Year you have been keeping in your gun safe until you made your first million if:

You have lost your last nickel in the stock market or your 401k is now a 201k.

You have lost your job at a local restaurant or bar, and your rent is due.

The Kentucky phone number and web site for unemployment claims do not work.

Drink the warm PBR you found under the seat of your car if:

The panic and desperation felt community-wide because of the coronavirus has got you thinking that maybe, just maybe we should pay more attention to climate change.

Drink like it is the end of the world as we know it if:

A Mad Coronavirus-Lib: A Tortoise In Crisis

A dark illness (VERB) the nation. Fear and confusion (VERB) every city and town. Some took precautions to help their (NOUN), particularly the elders. The more (ADJECTIVE) ones said it was all (NOUN) and everything would be fine.

From state to state, animals of all colors, backgrounds and leg counts looked to their elected leaders for help.

This is the story of one particularly powerful, (ADJECTIVE) tortoise, who doesn’t care about (PRONOUN) but himself.

The (ADJECTIVE) tortoise was also trying to protect his (NOUN) in an election year. Unfortunately for the tortoise, his political fate was to the president — a rare, orange, blobfish — President Blobfish — who did not want to look like a (NOUN) and a (NOUN), so he (VERB) the animals into thinking everything was fine. Worried he might (VERB) President Blobfish, the tortoise decided he didn’t care how many animals got sick, lost their (NOUN), (NOUN) or (NOUN), not even a global pandemic would  force the Senate to work over the weekend on his watch. He was going to save his own (NOUN) at all costs.

So, against the advice of Dr. Penguin and the waddle of experts from the Centers for Disease Control and Prevention, the tortoise decided he was going to (VERB) to his home in Louisville, Kentucky to attend an (NOUN) for a kangaroo he recently had confirmed to the federal court. He even (VERB) his wife, a chameleon who was Secretary of Transportation, and a kangaroo of the Supreme Court to accompany him.

In the days leading up to the event, more and more animals caught the (NOUN) and all (plural NOUN) were canceled. But, the tortoise always stuck to his plan.

Once in Louisville, the tortoise (VERB) the regular updates from the golden retriever recently elected as Kentucky’s governor — a retriever all Kentucky animals had (VERB) for his (ADJECTIVE), (ADJECTIVE) and (ADJECTIVE) during the crisis.

The tortoise was not particularly fond of the retriever, but he was happy the crisis had not happened during the previous (NOUN’s) administration. “Thank goodness that (ADJECTIVE) weasel isn’t still the governor,” he thought.

The tortoise wanted to (VERB) before the big celebration, but, recently, whenever he went out to eat in Louisville, other animals would (VERB) him. Not wanting to embarrass himself in front of the kangaroo, he decided to go to the Highlands Krogmart… his Krogmart of choice. When he got there, he was shocked to find the grocery had been cleaned out by (ADJECTIVE) animals, preparing to (VERB) at home. He was so surprised they were sold out of (NOUN), he pooped his shell. The real (NOUN) set in when he went to get toilet paper for the poop on his undershell, and they were sold out!

The tortoise began to believe there was a crisis. But he would stick to the plan.

Later in the evening, close to midnight, the tortoise got a call:

The Hare, Speaker of the House, a tireless leader, had worked through the weekend until she struck a deal with the Treasury Secretary — a (NOUN) the size of a man — to provide federal emergency assistance to animals affected by the virus crisis.

Most important to the tortoise, even President Blobfish supported the emergency action. But the tortoise was out of town, so the Senate was closed, and all of the animals had to wait for the tortoise to (VERB) his way back to the Capitol.

After, he went to the (NOUN) to (VERB) the shit off his shell. There was no toilet paper. “Maybe this is a real crisis,” the tortoise thought. “Oh well, what’s a little shit on your shell? I’ll still eat those Kentucky Democratic (NOUN) for lunch.”