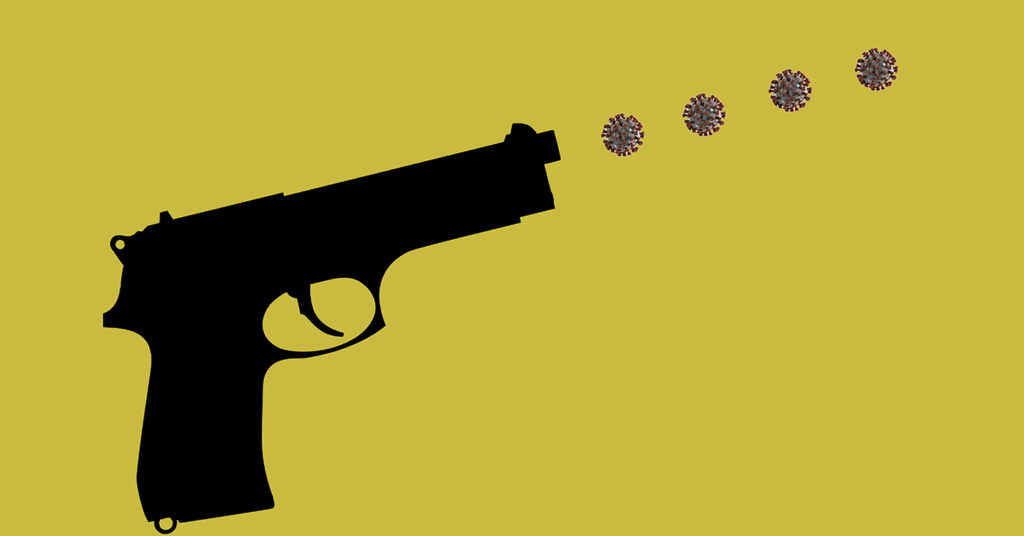 Keith Searcy was already planning on buying a gun.

The 22-year-old New Albany resident has been shooting since he was a teenager and was saving to buy one this summer.

Then, the novel coronavirus drove crowds to the grocery stores, and Searcy observed people acting, what he called, “irrational.”

Irrational, like storming grocery stores for toilet paper (even though there’s nothing about coronavirus that requires more toilet paper than normal).

“I decided to move my timeline up a bit, so if things do go sideways, I was ready,” he said.

As coronavirus fears have increased and measures from the government to keep people inside and stop the spread have tightened, gun stores across Kentuckiana have been swamped with customers, stripping the stores of firearms and ammo. This week, Gov. Andy Beshear shut down all “nonessential” businesses, but apparently not gun shops — “nothing in this Order should be construed to interfere with the lawful sale of firearms and ammunition.”

Out of seven gun stores reached by LEO last week, two said they were too busy to even talk. One answered with a recorded message that said no one was available to talk due to a high volume of customers. Bill Wolf of Wolf Supply, LLC, had time to pick up the phone, but only after he had to close his businesses because he had sold out of all of his ammo and most of his firearms.

“They’re telling me it’s weeks to months before we can start getting inventory back in,” he said.

The same rush on guns has been observed in other states. A USA Today story reported long lines at gun stores and increased ammo purchases in Wisconsin, California, North Carolina, Georgia, Florida and Missouri.

Why does Wolf think more people are buying guns?

Ken Pagano, a senior manager at Louisville Armory, a gun range that sells ammo, had a similar answer. “No one knows exactly, just with all the media and the social media awareness of everything that’s going on, people have a sense that there may be something ominous on the horizon,” he said.

Despite Beshear’s exception, the Louisville Armory shut down on Monday “to help reduce the spread of COVID-19,” according to its Facebook.

Searcy, who bought a Del-Ton rifle modeled after an AR-15 from an Indiana firearms dealer, said he originally wanted a gun for several reasons, including the simple fact that he likes firearms, just as he likes cars or other “heavily engineered” things. But, Searcy said, he’s also wanted to buy a gun in case of an event of societal upheaval. The coronavirus brought those fears closer to reality.

Searcy traces this worldview back to a book: “Nightfall” by Isaac Asimov.

The science fiction novelette, later adapted into a novel, depicts life on a planet that is always lit up by the sun. But, every 2,000 years, an eclipse plunges the world into darkness, and its inhabitants go mad.

“Basically what I learned from that book is, the biggest problem when bad things happen is that people behave unpredictably and illogically,” he said.

Which is what his mind jumped to when he saw shoppers stocking up on toilet paper that they didn’t need. Suddenly, Searcy could picture a future wherein the supply chain for groceries and medicine had broken down, leading to looting, increased competition for resources and, eventually, violence.

“That’s incredibly unlikely,” Searcy admitted. “But in the event that I’m wrong and things do go that way, I don’t want to be high and dry and not able to take care of myself or, you know my roommate or other people I care about.”

Searcy said he does not think everyone scared of coronavirus should buy a firearm, especially if they don’t have the experience he does, such as completed gun safety courses and firearm merit badges earned in Boy Scouts.

Many customers coming to Wolf’s store before he closed were new firearm owners, Wolf said. But, as gun ranges shut down, there has been nowhere for them to train.

“This reminds me of when President Obama was in office and every time there had been an active shooter event, people were afraid of gun legislation being passed or whatever,” he said. “We would see continuous spikes.”

In fact, Pagano thinks they were higher in the Obama years than in recent days.