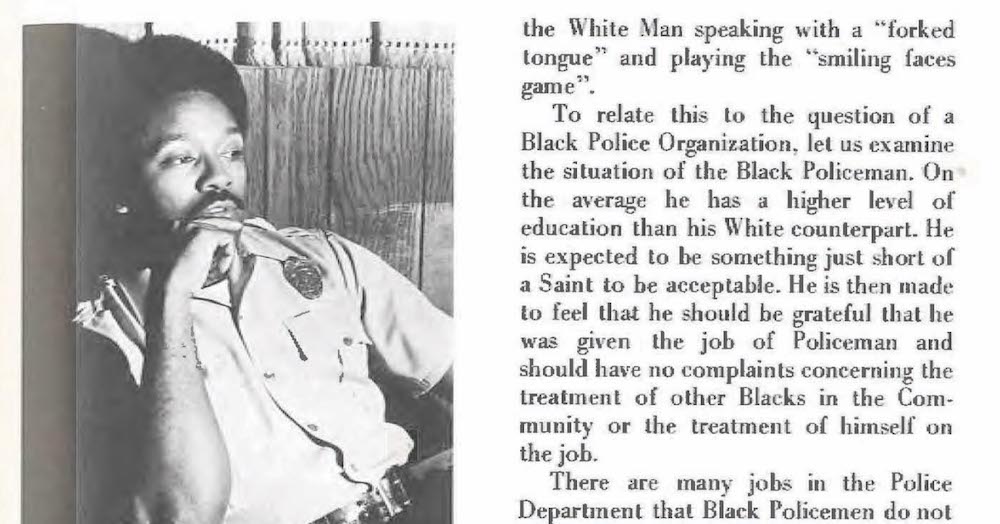 Not by choice, but out of necessity. Just as there is a necessity for Black Pride, Black Muslims, Black Journal, Black Panthers and Black Omnibus, the system that we live in has brought into being, The Louisville Black Police Officers Organization. We live in a racist society, though there are many, both Black and White, who will deny this. Black people did not create the system, they were put into it without any choice. There are some Blacks who have been wise enough to realize this and have made great strides toward eradicating the situation. One group in the United States that stands out in my mind is The Nation Of Islam, under the leadership of Mr. Elijah Muhammad.

Black people in this country have traditionally strived for an integrated society because society has said that this is the only way. As a result of these attempts, Blacks have become frustrated, disenchanted and bitter. This has happened because, as in the case of the White Man-Indian relations, the White Man-Black Man relationship has been of the White Man speaking with a “forked tongue” and playing the “smiling faces game.”

To relate this to the question of a Black Police Organization, let us examine the situation of the Black Policeman. On the average, he has a higher level of education than his White counterpart. He is expected to be something just short of a Saint to be acceptable. He is then made to feel that he should be grateful that he was given the job of Policeman and should have no complaints concerning the treatment of other Blacks in the Community or the treatment of himself on the job.

There are many jobs in the Police Department that Black Policemen do not have now and have never had. By denying us these jobs, Black Policemen are programmed into feeling inferior to White Policemen. You might say, “Things are better now and you can take examinations and get promoted.” This might seem to be the solution but let’s look into this.

Twenty years ago, the number of Black Police Officers in the Department was approximately 40. Ten years ago, the number was 40. Today the number is the same. The total number of Policemen during this same period of time has increased to over approximately 350 and is now approximately 760 men. During this same period of time, the number of Blacks that have been promoted to the level of a commanding officer has remained at no more than four. This situation is very discouraging, especially to the older Black Officer. When he came on the job, he was assigned to a walking beat and deprived of the experience of his White classmates. For some five to ten years, he was considered to be unqualified to drive a Police car or Motorcycle nor was he allowed to work in alI areas of the City as was his White classmate. Just as the system took three years from the young career of the Great Muhammad Ali, the same system has ·taken from five to ten years from the careers of many Black Policemen. How can he now be expected to make higher scores on the test after being placed in subservient roles for so many years? Just as it has affected Muhammad Ali, it has also had its effect on the Black Policeman. Under this system has emerged a feeling of Black inferiority among many of the White Officers. Many times this feeling is carried into the Black Community, how can it not be? Where Blacks are treated as equals within Police Departments, then Blacks in the Community will not be — treated as inferiors.

Now let us look at cases of disciplinary action. With the exception of possibly one Officer, Blacks that have been dismissed from the Department have been dismissed for things less serious than Whites who are still on the job today. This article is only a minute look at the situation and only scratches the surface. It is my hope that it will motivate you in a way that you can understand “Why a Black Police Organization.” If you can answer the following questions, then you understand why:

1. Why is there a Black Community? 2. Why are the Inner City Schools predominantly Black? 3. Why do we have Black Churches? 4. Why are Black people victimized, brutalized and subjected to harassment? Now that you know the answer, you should also know why it is important that we get more young Blacks from within the Community to become Policemen and why all Black People must maintain their dignity as Men, regardless of our occupations. Of what use has a life been lived when lived without the dignity of a man?

I am writing this article as a free Black Citizen of this Country and in no way do I represent the Louisville Division of Police in expressing my opinions in this article.

“I AM MY BROTHERS KEEPER, BE MY BROTHER.” A slogan of The Louisville Black Police Officers Organization.