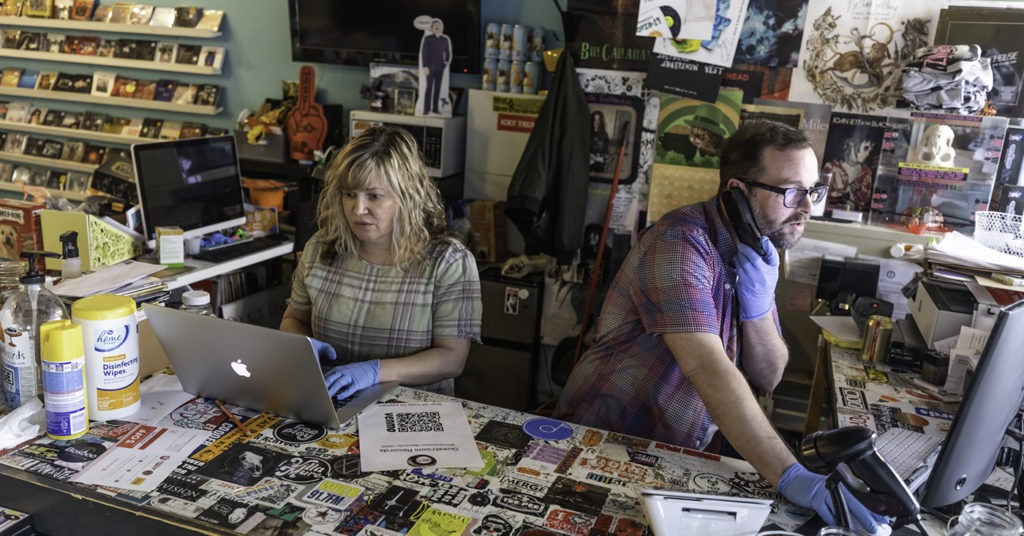 It isn’t possible right now to walk into your neighborhood record store, comb through bin after bin and strike up conversations and arguments about all things music, but there are still ways to buy vinyl from those Louisville businesses.

For example, Guestroom Records shut its doors to the public a week before the ordered closure of “nonessential” retail stores on Sunday, but the Frankfort Avenue shop has been selling albums through curbside pickup, delivery and shipping — options that are all currently still allowed.

“I made the analogy that we are a very, very slow pizza place, with some of the most obscure toppings that you can ask for,” Guestroom Records co-owner Travis Searle said. “Bon Iver and Tame Impala, those are pepperoni. Art Blakey double LP audiophile jazz reissues, that’s artichoke skin that has been cured in Spanish olive oil, brined in the sun. You can call in your toppings and maybe we have them and maybe we don’t. Maybe we can get them and maybe we can’t.”

Since record stores are generally small rooms where most customers are touching dozens, if not hundreds, of items, many in Louisville decided to close to the public before the mandate. But, places such as Guestroom, Surface Noise and Matt Anthony’s Records Shop have been brainstorming safe ways to allow people to continue to buy albums. The options vary from store to store — most have used online stores or third-party sellers and marketplaces such as Discogs to ship records. Some also have pickup options where customers call in, ask about the in-stock status of what they’re looking for, pay over the phone and pick up the order in front of the store. Because the pandemic has caused an unpredictable series of situations, the purchasing options at most stores have changed, and might again, so it’s best to check websites and Facebook pages.

“It’s scary times, it’s weird, but for a lot of people who have been quarantined at home, you know, you get bored, you want a new record,” Searle said. “We’ve got dozens or hundreds of people who come into the store weekly or once a month and want to support us, want to continue working on their record collection, on their hobby, want to listen to something fun or uplifting or whatever. We want to be here for that as much as we can be.”

Shutting down a ‘nerve center’

Surface Noise ended its pickup option Monday, but records from the store are still available via Discogs and mail order. The store’s owner Brett Ralph said what he’ll miss most are the people who congregate in the store. “More so than the business, Surface Noise aspires to be kind of a nerve center, a salon, a place to come together,” he said.

Ralph, a longtime contributor to the music scene who played in early local punk and hardcore bands such as Malignant Growth and Fading Out, had moved away from Louisville to pursue academics and poetry. But, he moved back to the city to once again contribute to its culture. And not being able engage with other music and art fans has been the most difficult thing about closing the store for him.

“I moved back to Louisville from a farm house out in the country, where I lived the isolated life of a poet on the farm,” Ralph said. “And I’m not saying I didn’t have friends, and a social fabric there, but I moved back to Louisville because I wanted to immerse myself in community, and I wanted to benefit from it, and I wanted to contribute to it. And that’s been the hardest thing for me to give up with Surface Noise: the sense of community that I’ve been cultivating, and that has been fueling and sustaining me, and enriching my life.”

From doom to resurgence to worry

There was a time when it seemed all record stores were doomed. In the early 2010s, a vinyl resurgence changed that, and it proved to be a sustainable trend, with 1.2 million vinyl albums sold in the week ending on Dec. 26, 2019. That marked the single largest week in sales for the format since Nielsen Music began electronically tracking music sales in 1991, according to Billboard. Still, that doesn’t mean your local record store is impervious to an economic hit such as the one we’re experiencing, as it’s important to remember that big-box stores and online vendors have their hands in the vinyl game as well. What makes neighborhood record stores different is, as Ralph mentioned, the scene within them, as the atmosphere and events that happen in those places can’t be replicated elsewhere.

And that sentiment was reflected by vinyl collector Joey Flispart, who used the curbside pickup at Guestroom last week and has more records ordered. He said that, in times like these, it’s important to put money into the places that you like.

“There are a few things that I’ve been listening to digitally a lot lately that I knew that I really wanted to have on vinyl, that I was just kind of putting off, so I picked up a few of those things, because I was like, ‘Yeah it’s time to do that,’” Flispart said. “Right now, I can work at home, and my wife, she’s a teacher, so she can do some stuff from home, too, through this. So, as long as we’re able to support some other people, and put some money into local stuff, I definitely want to do that.” •