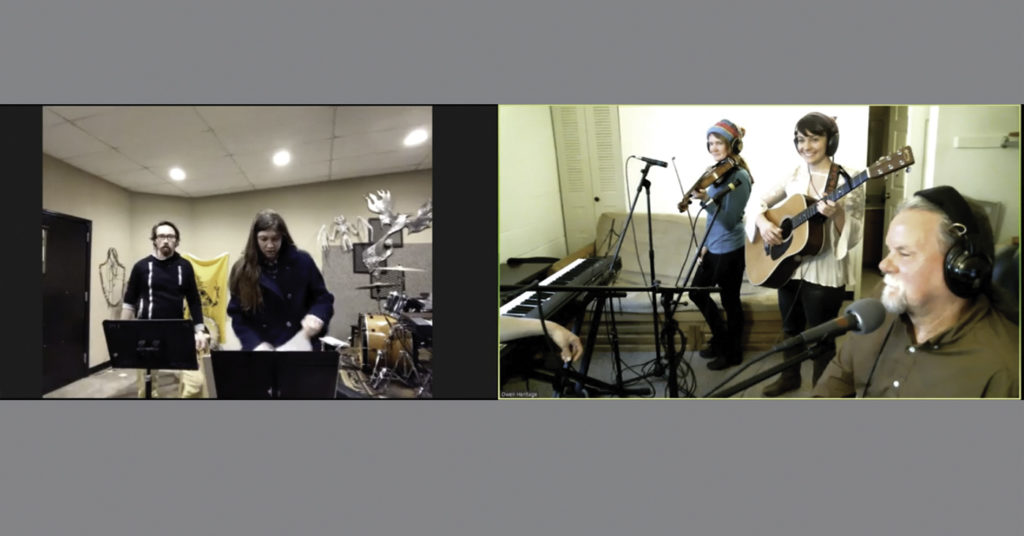 A screenshot from a livestream from Kentuckiana Association of Musicians and Singers.

Aron Conaway has an idea, one that could help break the boredom of isolation during the COVID-19 outbreak. It also could raise money to save the MAMMOTH, his Civil War-era building in West Louisville that he envisions as a multi-purpose art center but that the city closed because of structural issues. This Saturday night, Conaway will livestream a five-hour variety show and fundraiser called MAMMOTH-vision 2020 featuring local musicians, poets and artists such as Bonnie “Prince” Billy, Tim Furnish, John Paul Wright, Roea Wallace and Gregory Chaney.

“Two weeks ago,” Conaway said, “I woke up and was like, people are going to be extremely isolated and feeling really alienated, and we can put something together that can really be entertaining but also give people a sense of hope, and see other people in the community, and out in the world, being creative in their own corners. So, it’s a way of people connecting and being inspired by the action of creativity.”

MAMMOTH-vision 2020 will run from 7 p.m. to midnight on March 28 at theMAMMOTH.org. It’s only one of the many innovative ways that Louisville musicians are working to provide live music during the pandemic. Like the big-name musicians that you see pulling together to provide online entertainment, the local scene has also been brainstorming.

Last Sunday, local jazz musicians Carly Johnson and Craig Wagner streamed a live set on Facebook from Matt Anthony’s Record Shop. Johnson, a full-time musician who usually plays five nights a week, said this outbreak has been devastating to the concert economy, but that it was important to make the best out of a bad situation.

“I took some time to be freaked out, and then I decided to do something about it,” Johnson said.  Johnson has started a GoFundMe called “With A Little Hope From My Friends” to help provide financial assistance for her and other full-time musicians during this time, and she has also decided to make that livestream gig a weekly event called Sunday Dinner With Carly & Craig, which will air at 7 p.m. every Sunday.

“Not doing music for going on two weeks now has felt really strange, and it’s a lack of connection and everybody is experiencing a huge lack of connection in anything they are doing, whether they are a musician or not, because of the quarantine, so I felt like, you know, there’s still got to be a way to connect with people and get music to people,” Johnson said. “To get a creative sense of normalcy for folks that are used to going out to hear live music, which is such a thing in Louisville. Everybody really values that.”

Kaiju has long been a place for indie and experimental music, comedy and other forms of entertainment, but, like the rest of the bars, it’s temporarily closed, so the venue’s promoter, McKinley Moore and a few of his friends decided to create a new digital space. Moore, Greg Welsh (Kaijuesdays), Nathan P. Woodard (The Wednesday Evening Quiz), Gracie Taylor (Sketchy Stuff) and others are creating content on a Facebook page called Louisville High Frequency, which is akin to a makeshift, online TV channel. Right now, they’re still figuring out details, but it’s up and running, and they’re working to solidify a schedule. The channel will have a variety of content, but, in terms of music, Moore wants to book shows from bands from other cities with a local opener. He also wants to start a regular series in which he and Charles Rivera create live scores to silent movies that are in the public domain.

“We all thought that some sort of central streaming outlet was needed for everyone we know doing cool shit,” Moore said. “That led us to start this Facebook page as sort of an internet cable access station to promote the local creative community and maintain some sort of central schedule of events. It might also help keep us from going insane while we’re stuck at home. Times are tough, especially in this industry, but it is important that we continue to work to maintain the communities that we have put so much time and effort into building.”

Last weekend, the Kentuckiana Association of Musicians and Singers hosted a livestream concert and benefit that featured Quite Literally, The Leftovers, The Light Fantastic and several others. It ended up raising more than $2,400 for the musicians who performed and provided a source of entertainment for people stuck inside, but they also had a few technical difficulties — periodically losing audio and video — something that might happen during these things, especially when people have been scrambling to set them up amidst an outbreak that has quickly changed everyday life. And it was still a really enjoyable concert.

Owen Heritage, founder of KAMS, encouraged anyone out there who has been thinking about trying a livestream or an innovative online idea to move forward with it.  “Go for it,” Heritage said. “Don’t expect perfection. Realize there are going to be technical problems, the sound may not be that great, for instance. But, just go with it. People are getting into the spirit of this.” •