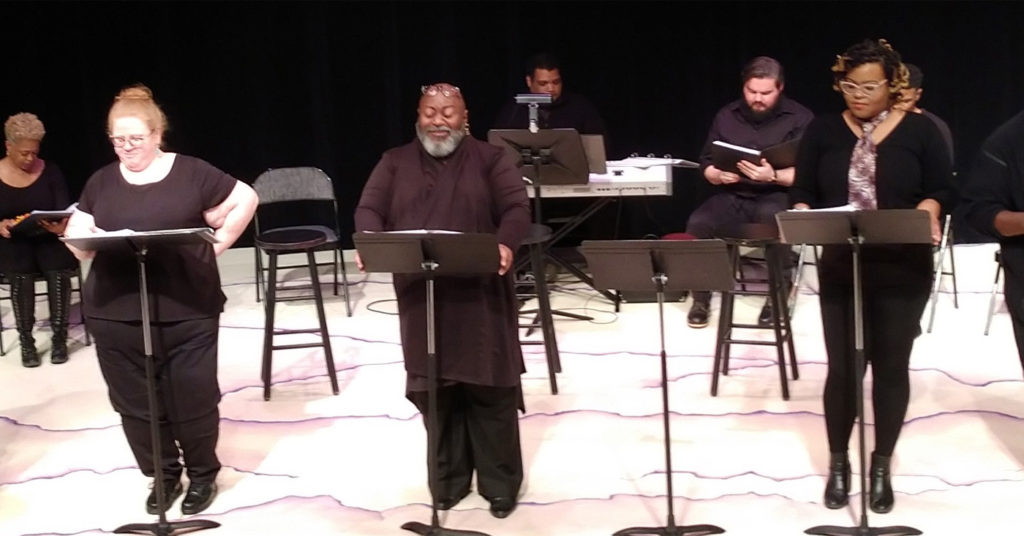 It’s been about 20 years since the debut of Louisville playwright Larry Muhammad’s play “Kentucky Colonel,” a biographical drama about the life of Frank Stanley Sr., the long-time publisher of the Louisville Defender newspaper. Since then, Muhammad has created a rich and varied body of work, all rooted in African American history and experience. He’s written plays about historical figures such as thoroughbred jockey Jimmy Winkfield and the late Louisville activist Rev. Louis Coleman. His work includes well-researched, historical plays as well as thoughtful fictions.

Muhammad’s newest play, a musical called “Sweet Evening Breeze,” is a fine blend of history and fiction. Here he takes two factual threads, imagines a plausible link between them and creates a richly evocative fiction rooted in a specific time and place — but very of the moment.

“Sweet Evening Breeze” made its public debut last weekend in a minimalist, staged reading produced by Kentucky Black Repertory Theatre and Pandora Productions at the Henry Clay Theatre. The production was supported by Lisa Osanka and Carla F. Wallace; the Faulkner Morgan Archives; and The Snowy Owl Foundation and was a benefit to support the soon-to-open Sweet Evening Breeze LGBT+ youth shelter. This isn’t Muhammad’s first foray into musical theater. “Buster!,” his play about Coleman, was rooted in the sounds of gospel.

But it’s his first full-blown use of the conventions of musical theater, with all its formal structures and challenges. Yet, even within the constraints of a staged reading, “Breeze” proves itself as compelling work that urgently deserves a full-scale production. Muhammad’s plot pulls together astonishing (to me, at least) threads of fact and weaves them into a piece that is funny, sexy, outrageous, poignant and inspiring. First, Muhammad’s titular character, Sweet Evening Breeze, is a celebrated Kentucky figure. Christened James Herndon, Sweet Evening Breeze was born in Georgetown, Kentucky in 1892. Abandoned as a child at Lexington’s Good Samaritan Hospital, Herndon was taken in by the staff and became one of the hospital’s most charismatic and valued staffers. Herndon died in 1983 — and is still well-remembered.

Herndon was also Black and openly gay. Accounts say that as early as the 1930s, Sweet Evening Breeze could be seen in drag on the streets of downtown Lexington. (You can Google “Sweet Evening Breeze” for details.) An admired and charismatic figure — even in the straight community, by all accounts, Sweet Evening Breeze was also a civil rights figure who triumphed in overcoming an arrest for the unlawful act of appearing publicly in drag. And Sweet Evening Breeze is widely credited with founding Lexington’s early drag show scene. Muhammad’s second factual element is the story of the 1962 UK football team known as “The Thin Thirty.” That year, Coach Charlie Bradshaw started with a roster of 88 players — but his brutal conditioning regimen eventually reduced the squad to a mere 30 (who heroically beat Tennessee in the season finale).

A 2007 book, “The Thin Thirty,” by Shannon Ragland alleges that the team was also entangled in a gay sex and point-shaving scandal involving a wealthy wrestling promoter and gambler named James Barnett, who used his friend Rock Hudson to lure team members to his home to be exploited. Muhammad takes those two factual threads and from them builds a high-spirited, high-minded musical with an exquisite villain, some complicated but sympathetic victims and some inspiring figures who redeem the day. Even absent the trappings of wardrobe, sets and a full orchestra, on the bare stage of the Henry Clay Theatre, this was wonderfully ingenious and entertaining.

Muhammad wrote the book and song lyrics (and used public domain music for the score, on the advice of Louisville composer and pianist Harry Pickens). It was an excellent solution that yielded a variety of great singable numbers, all led with energy by Phillip Morgan, music director and pianist. The opening production number, “Let’s All Be Fairies,” found the performers in a drag show called “The Creole Follies” donning their drag outfits. “Where are my titties?” one of them called out, as they sang an exuberant anthem that celebrated their sexuality.

The free-spirited Sweets (Shaquille Townes) announced himself in a sweet ballad, “I’m Just Me,” and we soon discover that Sweets’ partner is the grounded, pragmatic Homer (Troy Bell), who struggles to ensure the bills get paid. The playfully risqué “Bait and Switch” introduces another romantic pairing between Mac and Candy (Erica Goodman and Rachel Vidal, respectively). Members of the football team, including a strong-minded Quarterback (Julian Long) and a Fullback (T.A. Pryor), start throwing their weight around. But the bouncy production number “Lexington” displays the city’s progressive, tolerant spirit.

Still, Sweet Evening Breeze’s public lifestyle is threatened by the arrival of a new hospital administrator, Rev. West (played alternately by Robert Thompson and William Mack III), West’s conservative Christian values and antipathy for the sinfully popular Sweet Evening Breeze. And the tension ratchets up when Homer books the drag revue for a performance at the home of the gambler, Mr. Jimmy (Daniel Price).

The second half of the play is a whirlwind that pits the idealistic Breeze against the cynical gambler (“A Straight Man is Hard To Find”). And when Police Officer Poole (Jan Louden) recruits Breeze and Homer to entrap Mr. Jimmy, their song “Going Undercover” is a blissful blend of verbal wit and comic martial arts wit, even in the staged reading.

The three closing numbers bring the play to a resolution as complicated as the typical Shakespearian comedy. “Less Than Your Best” lays out Mr. Jimmy’s point-shaving scheme to the blackmailed Quarterback. Then there’s a turbulent emotional swing as “B.D. Blues” and then “Here Come The Brides” bring the play (and the relationship between Mac and Candy) to a richly uplifting conclusion. Producing musicals is an expensive proposition. “Sweet Evening Breeze” deserves a full run.