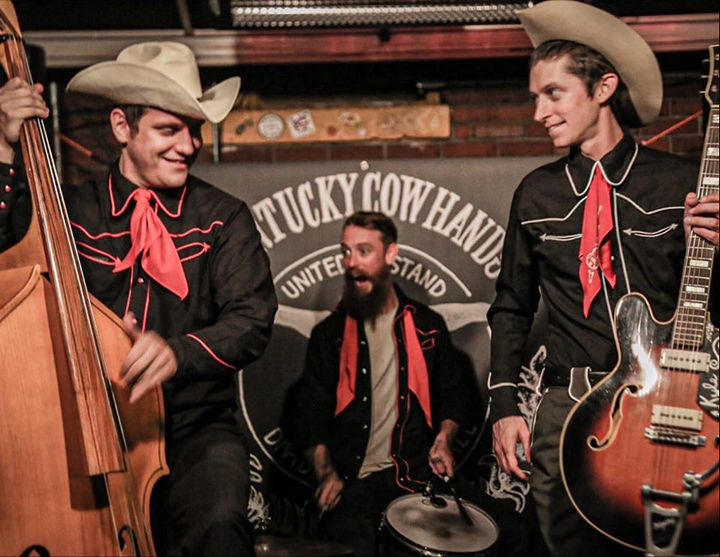 Andrew Brown of The Kentucky Cowhands said his band swipes a lot of their visual and musical aesthetics from classic country-era tropes, but he also admitted that, in reality, they aren’t very “good” at being cowboys.

“I’d argue that the song is really about how much we really suck at the textbook cowboy kind of stuff,” Brown, the band’s bassist, said with a laugh. “We don’t ride horses, and I’m actually allergic to them. Our farmhand skills are essentially nonexistent. We have no idea what we’d do if we spent any time with cattle or anything like that. I mean, we’re a country band based out of Louisville, what do you expect?”

But, sonically, “Cowhand Boogie” is exactly the song you’d expect to hear from a band named The Kentucky Cowhands. It’s chock full of feel-good rockabilly swing, rollicking stand-up bass and toe-tapping drums. Lead singer Kyle Eldridge recalls country greats like Webb Pierce and Lefty Frizzell, with catchy melodies and upbeat delivery. The songs seem like they could have stepped straight out of an old, small town dance hall.

“Musically, we’re all really inspired by a lot of classic country, Western swing, stuff like that,” Brown said. “Although, without Kyle, a lot of these songs would just sound like lame Guy Clark attempts. But, when we try and write these songs, we tend to think about certain subject matter. Like, a lot of songs talk about life in rural America and the usual themes that go with that. When I started writing this song, I just kept making fun of all those types of songs, honestly. ‘I ain’t no bull / I ain’t no steer / All I do is live in fear / Cause I’m a cowhand man / That’s what I am.’ To me, it’s the perfect stab at not being a good cowboy.”

Brown said his own personal history also plays a large part in the type of music he and the Cowhands write.

“You know, we’re not singer-songwriter dudes that want to vent and get something out for our own sake,” he said. “We’re trying to make lighthearted music so people can forget their struggles. I grew up in rural Appalachia where the average household income for my small town is $24,000. That’s straight-up poverty. Now, because we’re in a unique position to make music with our time, why would we want people to remember that life is hard? They know life is hard. I want them to forget and remember that there is joy to be celebrated and singing funny songs like ‘Cowhand Boogie’ I think is a path to do that.”

Brown also hopes “Cowhand Boogie” and the rest of their newest album will play a part in helping put them on the map in the coming year.

“I’m really happy with where the music coming out of Kentucky is heading,” Brown said. “Between Jack Harlow and Tyler Childers playing huge clubs and arenas along with playing on those late-night shows — we’re showing what art can really look like in 2020 here in the Bluegrass. I believe soon enough we’ll be making the same kind of waves too.” •