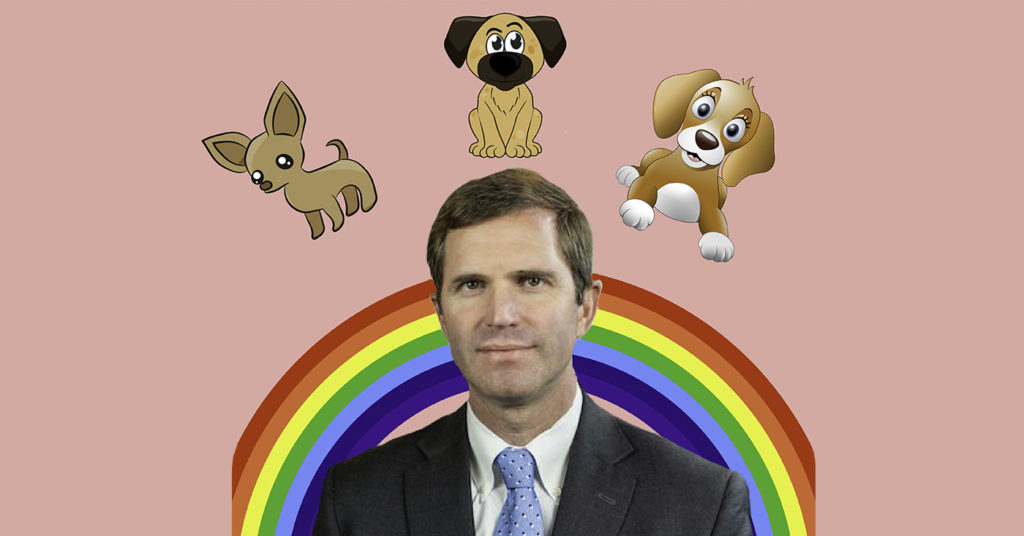 From the Political Affairs Desk of the Kentucky Derby Motor Speedway.

These are weird and strange days, #TeamKentucky, living in a world where all of the toilet paper and noodles are missing from store shelves, but there’s enough fresh produce to feed everyone and all the homeless in Louisville.

The most notable side effect of Coronamonium has been the decrease of sirens past the office of the Political Affairs Desk and the guy on I-65 North in a Mustang GT who thinks his personal speed limit is somewhere around 90 mph and reports of a fellow busy cleaning out the store shelves of food at Walgreens on Broadway. If this is the bedlam to expect from Corona, then to be afraid is silly, as to be afraid is to assume the inherent worst of humanity during hard times.

Meanwhile, in Washington, the smell of sulfur is dense, and dark smoke clogs the skyline from James Comer & Co.’s pillage-and-burn stock selloff with their insider information. This is a city made of elected corporate minions who are now arguing about which multinational company receives bailout funds first.

But while Rome was busy burning itself down, Mayor Greg Fischer’s office assembled a ninja task force with the Community Foundation of Louisville, Metro Government and Metro United Way. They call it the One Louisville: COVID-19 Response Fund.

It will provide financial help with rent or utilities payments, childcare, transportation, food, pharmaceutical needs and “other support as determined,” the mayor’s office said. That could mean $1,000 in emergency funding for individual households. There are a lot of details, so go to cflouisville.org/one-louisville to figure it out for yourself.

There is an option to donate on the website, and it ought to be your duty to do so if you can, even if only to brag about your donation after these dark clouds roll past the horizon. Furthermore, the requirements to qualify for this assistance are completely reasonable, compared to any other response effort to prevent an economic collapse.

Listen this time to the mayor: “We know that the necessary response to stem the spread of COVID-19 is creating hardships for so many in our community, especially some of our most vulnerable,” Fischer in a statement. “This fund is meant to ease that burden somewhat.”

“This is what a compassionate city does,” Fischer said. This is an important distinction, the difference between acting as if the Fund will solve all the woes and recognizing the need for compassion in the coming weeks with the organization of making help available. Not all is lost.

We are hearing some of that from Beshear the Younger during his nightly address. But not from Cheato-in-Chief, blathering into the microphone from D.C. until passing the microphone to someone slightly more coherent than him to speak. It does not bode well for the coming weeks.

In stark contrast, Beshear the Younger is busting the balls of everyone who refuses to follow orders for the Greater Good, if you haven’t tuned in yet. His nightly updates are a throwback to an era of FDR’s Fireside Chats and C.S. Lewis’ Broadcast Talks. These addresses are a comforting consistency to uncertainty, Beshear’s voice with a hint of wood smoke and bourbon inviting its listener to embrace a world where we’re all working #TogetherKy.

Beshear the Younger’s realistic approach creates the comfort because his reassurances that this will get better but his acknowledgment that it will get worse before it gets better is exactly what #TeamKentucky needs to hear. That and his zero-FKs attitude about preachers who can’t trust their flock to read their Book at home for a few weekends and him noting that there are independent actors who would flood communications with misinformation are absolutely necessary.

Do not take offense, though, because he isn’t calling out anyone but calling them back into the circle of community for the benefit of all. Also, Beshear the Younger awarding a Fried Chicken Degree to his sign language translator is telling about the man at Kentucky’s helm. He is the same man whose Puppies and Rainbows speech at the State of the Commonwealth was greeted with suspicion. Yet, his words and actions are consistent, and only the times have changed.

Follow his lead, recognize him as one of the helpers who is calling us in, not out as do those who consider their own selfish desires more important than protecting us all.  Embrace the Puppies and Rainbows falling from Beshear the Younger’s mouth as they are the words we ought to have been listening to and following all along.

Therefore: the Political Affairs Desk would like to give Gov. Beshear the Younger the highest of Washed Hands High Fives after all of this mess calms down. There is also the offer of Ky Tavern and Ski chaser on the table as a starting point of the Bourbonic Plague that’s going to go down once we all can be together again, but that offer is ultimately up to Uncle Andy.

Some don’t drink often — I am one — but these strange times are times for strange offers from the subversive to an authority.

There Is No Stigma In Public Assistance!
Follow The Schedule When Filling Out An Application For Help!
There Is Medicaid, Unemployment & Food Stamps!
Stay Home & Flatten The Curve By Washing Your Hands! •

Huntress Thompson is a poet and philosopher #HealthyAtHome in Louisville.