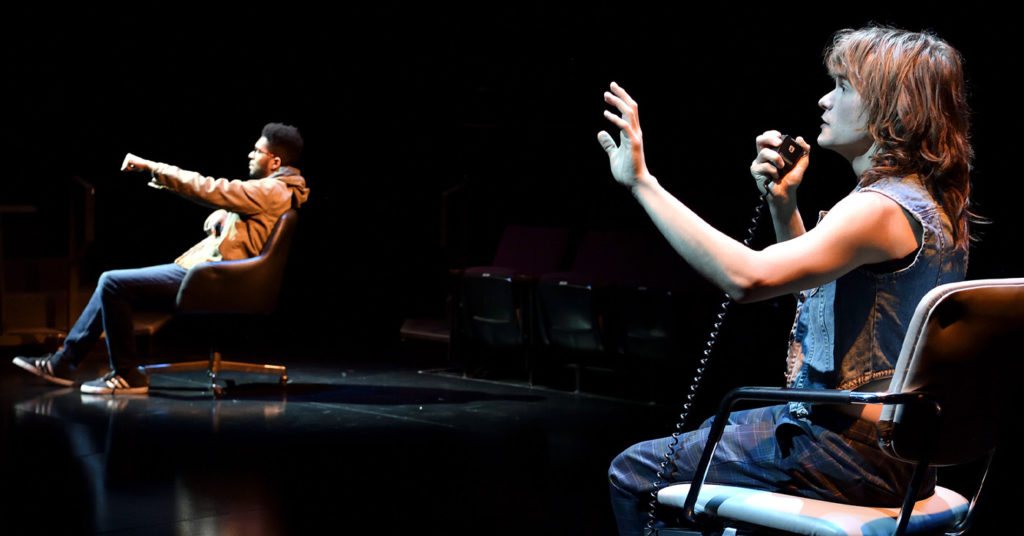 The Humana Festival kicked off with the Actors Theatre Professional Training Company Showcase, “Are You There?”, a collection of short plays from three writers. Many PTC showcases have explored how humans connect with one another, over beliefs and lore, across a table or far away. “Are You There?” brings that into 2020 by zooming in on the complex and somewhat codependent relationship between modern technology — from social media to CB radios — and communication.

A theme like this has the potential to get a little preachy, and occasionally, bits of the show were preachy. The play about Rosa Parks (Kaitlin Boyer) in the age of social media seemed lost in conflicting messages, for instance: In the beginning, it seemed to tell the audience that #hashtactivism is a poor substitute for real activism (fair point), but the end of the piece also seemed to warn against “cancel culture” with the idea that if you block too many people on social media, you’ll be left without real-life allies. This play seemed to spark challenging discussion for the ride home, rather than land on a clean and simple “moral” of the story.

“Are You There?” was not short on nuance. The general takeaway was that the combination of communication and technology is messy, much like communication has always been messy. One of the last plays in the collection even took the audience back to switchboard operators navigating a party phone line in the early 20th century to show how little some things had changed.

We saw the addictive quality of social media validation through ghosts of famous singers continuing to try to trend on social media from the afterlife. We watched lonely truckers (Michael Allyn and Alex Might) find connection and a sense of being known over CB radios. The liminal spaces in between the plays, as the cast wandered onto the blank stages checking their phones or arguing over Twitter, added a neat, interconnected effect.

One of my favorite pieces was a simpler one: reminiscent of the days of AOL or MSN Messenger — a group of high school friends logging on right after school, to the exclusion of everything else. Online, they’re raw and vulnerable with each other, as well as gushingly affectionate in a way that sometimes seemed performative. The piece even delves into the all too real element of one person being talked over in a group chat and what’s missed from the other side of the screen. It more than any other reminded me of both the good and bad of group chats and online friendships I’ve had over the years.

‘Nicole Clark Is Having a Baby’

In “Nicole Clark Is Having a Baby,” by Morgan Gould, the set struck me even before the play began. It’s a small living room, dining room and kitchen, all as outdated as the 30-year-old coffee pot Nicole (Nicole Spiezio) struggles with in the opening scene. There are wolf motifs everywhere — the pillows, knickknacks on the table, refrigerator magnets and even a clock that howls at certain hours. It’s never referenced in the script, Helen Clark’s (Nancy Robinette) love of wolves; it’s a personal quirk added by scenic designer Lauren Helpern herself, and it’s the thing that makes the set truly feel relatable — like stepping into your own mother’s or grandmother’s home. And that sets the tone for the show.

We’re with these characters for only an hour and forty minutes, but they’re so richly developed and portrayed by all four actors that you get a sense of their lives beyond even what’s contained in the story. “Nicole Clark” is full of complicated characters and dialogue that flows in an almost mumblecore style. Only once in the entire show — in which Nicole tells the story of the only time Helen seemed proud of her when she came home having lost 50 pounds due to mono — did I think, “This is a theater monologue.” Every other exchange, even in that scene, feels so true to the friction between adult children and their parents, the clash between generations, that to watch it almost felt like intruding on a real spat.

Even Nicole’s earlier speech to Robert (Deshawn Harold Mitchell) about women not needing to be deemed “beautiful” by men in order to be valuable (my favorite spoken bit in the entire show) felt less like a speech and more like an organically spouted righteous rant. It’s not only the dialogue that shines in “Nicole Clark,” however. Often as Helen went on a tangent about the contents of the fridge or Nicole and Helen screamed at each other about their fractured relationship, I found myself watching the faces of the other characters. The silent, exasperated expressions that Nicole and fiancé Robert shared behind Helen’s back. The knowing looks between Nicole and her childhood best friend, Amy (Emily Kunkel). The look on Helen’s face when confronted with the way she had emotionally abused Nicole — was she really listening, or already building her defense?

The show tackles heavy topics like fatphobia, dysfunctional family relationships and complicated romantic relationships, the impact of emotional abuse, fear of impending parenthood. It could have been an angst fest all the way through, but everything is filtered through laugh-out-loud humor that sums up Nicole’s character and resonates with the experience of many fat women. Nicole is constantly told how funny she is, and she prides herself on it. She also knows — and discusses — that fat women often have to be funny as a way of coping with the way the world treats them. It’s a truth Gould knows well herself and works into her work intentionally. •