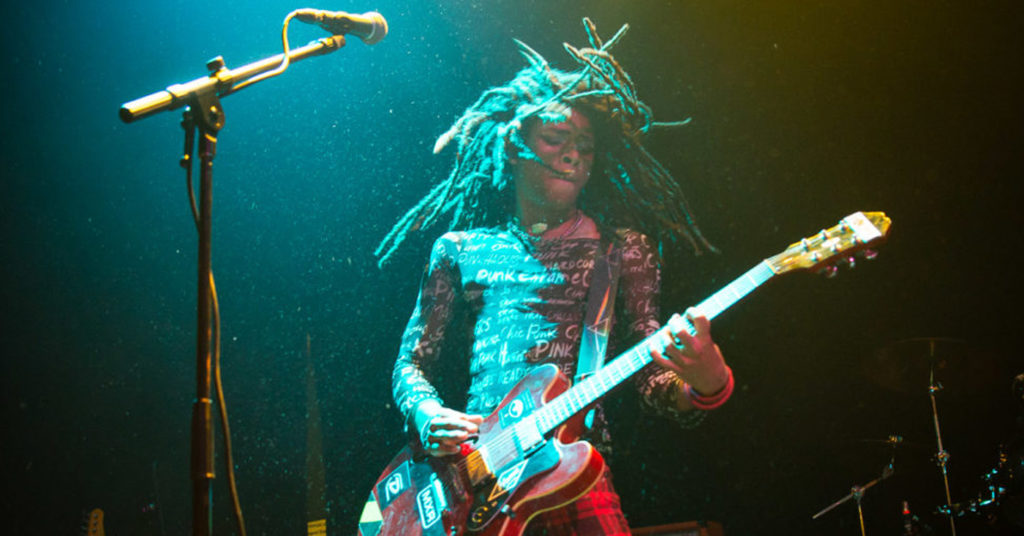 Hazelfire vocalist and guitarist Hazel Kuran said that while “Sharkbait” was inspired by the children’s movie “Finding Nemo,” the song’s themes are much deeper and darker.

“The meaning of the song is much more serious than most would assume,” Kuran said. “The story being told in the song is about a predator in the scene murdering a very naive kid by offering drugs and leading him to his home where the kid would be cannibalized. The setting is actually at a house show, and everyone’s having a good time and so focused on the excitement of the show that they don’t even realize what’s happening right next to them. ‘Sharkbait’ is a reminder to the crowd to take care of each other and keep the scene safe.”

Kuran elaborated on what “sharkbait” means. “The term sharkbait itself I use to describe a teenager who is so naive to the point where they’re easily persuaded into really bad situations,” Kuran said. “And once you dissect the lyrics and really understand what’s going on, it becomes deeper than what it actually is. It’s to say, ‘Hey, we’re all here to have a good time, but remember that there are still some people out here who want to take advantage of you, and we have to look out for each other.’ Maybe it’ll catch on and people will start telling their friends to not be sharkbait.”

“Sharkbait” buzz-saws in with Kuran’s mean riff before combusting into a doom-infused punk anthem with the megaphone vocals of Ministry’s rage. And just when you think you have the song figured out, Hazelfire firebombs into an unexpected thrash metal breakdown before bowing out in a haunting piano coda, a la Ozzy’s “No More Tears.”

“At the time of writing the Pandora’s Box album, I was mostly listening to thrash and doom metal,” Kuran said. “Other than that, it was Dead Kennedys and Misfits. As for guitar, I randomly played the opening riff while messing around with my amp for a better guitar tone. A couple days later, I was thinking about that riff while I was at work, and I started writing up a random story on my phone just to kill time and thinking that it sounded like an ‘80s horror movie. Then, it just clicked in my head, and [I] immediately started writing lyrics as soon as I got home.”

And how did a children’s movie inspire this otherwise gruesome song? “When I was in middle school whenever someone would say ‘sharkbait’ everyone would stop what they were doing and yell, ‘Sharkbait hoo ha ha!’” Kuran said. “It was an inside joke that was never planned but it always reminded me that at the end of the day we’re still a community. So whenever I play this song live, it’s like that same spirit and that same energy I had when I was 12.”•