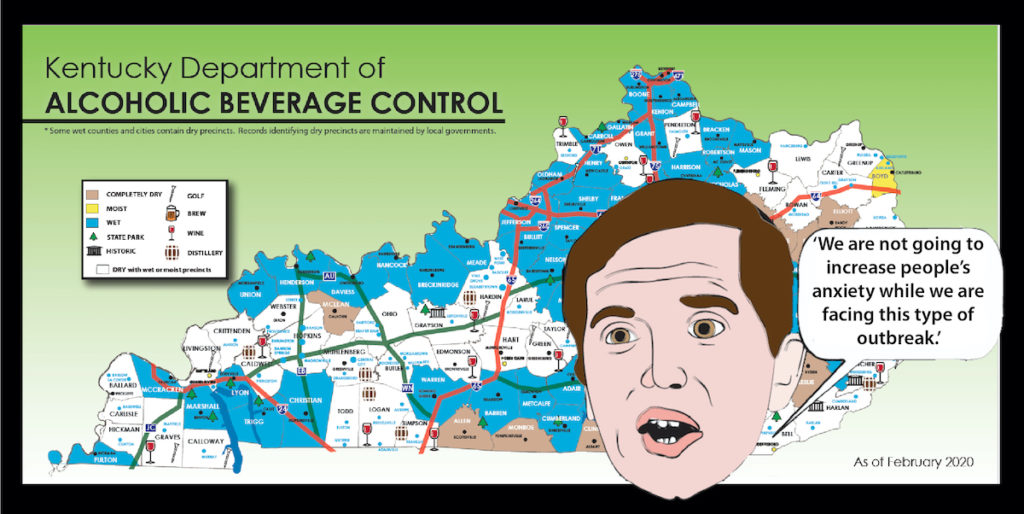 There you have it: Beer and wine and liquor ARE “life-sustaining,” Gov. Andy says.

During Wednesday’s 5 p.m. Show and Tell with Gov. Andy, he was explaining his latest executive order to close “non-life-sustaining” businesses, when he looked up from his papers and with what sounded like a sigh, a shrug and a hand wave he said:

What would happen if we couldn’t get our booze while holed up inside and away from people? It would be almost as bad as if the internet went down. (Shudder.)

Gov. Andy’s sigh and shrug may have reflected Kentucky’s uneasy, odd relationship with liquor, stemming all the way back to even before Prohibition.

In November 1919, Kentuckians passed a state constitutional amendment banning alcohol two months before Prohibition. When the 21st Amendment repealed the 18th Amendment, Kentucky was among the states to let local governments decide through elections whether to allow alcohol sales. To this date, there are 11 entirely dry counties out of 120 and more than 50 dry counties with wet or “moist” precincts.

It wasn’t until 2013 that you could buy a drink on Election Day, thanks to a bill that Andy’s dad, Gov. Steve Beshear signed into law. The Distilled Spirits Council called Kentucky’s Election Day ban “America’s strictest.”

You couldn’t buy a drink at a restaurant on Sunday in Louisville before 1 p.m. until 2013 when the city changed it to 10 a.m. (Just before Derby and Mother’s Day because brunch lobby — strong!)

Chris Zaborowski, owner of Westport Whiskey and Wine in Westport Village, told The Courier Journal that liquor stores are allowed to remain open because pharmacies also have been allowed to sell booze under Prohibition-era law. Convenience stores and other mixed-retail stores can sell alcohol. So, it is a matter of fairness allowing liquor stores to compete.

Now, Kentucky sells itself to the rest of the world as being bonkers for bourbon and even craft beer. Shhh! No one needs to know the truth.

So, given this conflicted nature of Kentucky’s relationship with booze — and Gov. Andy’s Baptist roots (his uncle and grandfather were Primitive Baptist preachers) — perhaps it is not shocking that he would sigh and shrug… and that his office’s press release on his latest order does not mention liquor stores.

Nor does the actual order.

Yet, the order does make a special mention of guns, as did the last one regarding “essential” businesses. One could argue whether guns are “essential,” but are they really “necessary to sustain life.”

Here is what the order says, in part: “Firearms. Consistent with KRS 39A.100(1)(h) and (3), nothing in this Order should be construed to interfere with the lawful sale of firearms and ammunition.”

That’s right, Kentucky — Keep selling and buying those guns as long as you practice social distancing and good hygiene when you do, Gov. Andy wrote.

But, at least we will have our liquor while shooting our guns, right?