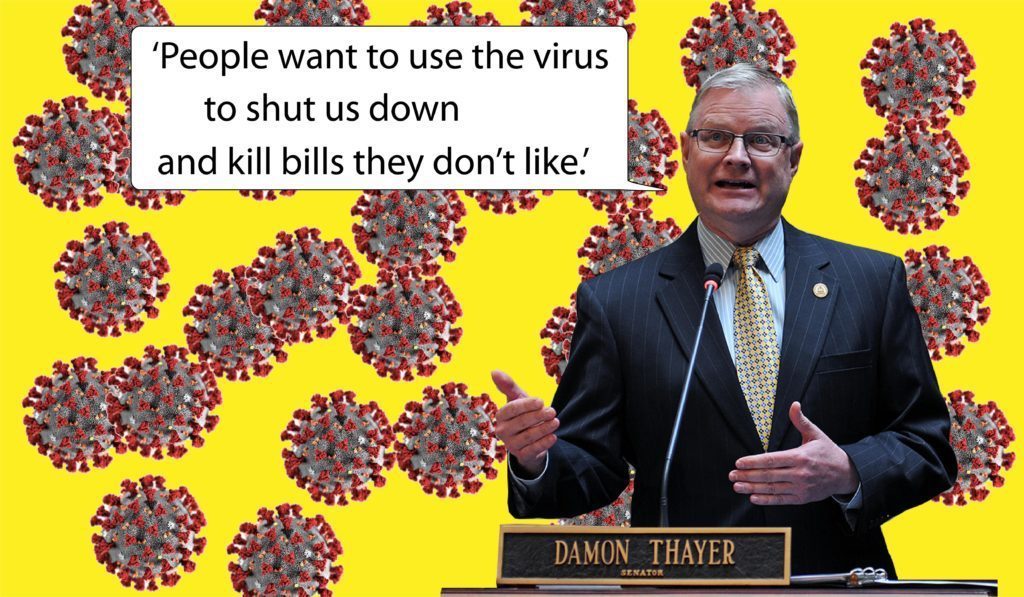 It’s bad enough that Kentucky had to endure the national embarrassment of Gov. Matt Bevin, and we still suffer the taint of Republican Sens. Mitch McConnell and Rand Paul.

Oh, and U.S. Rep. Thomas “I Patented Churlishness” Massie, who singlehandedly forced members of Congress to return to Washington, D.C., in the midst of an epidemic to pass a bill that even tRump says is needed to help people in this time.

Now up at bat from Kentucky’s bench of B Team Troglodytes is state Sen. Damon Thayer, the Republican floor leader from Georgetown, Kentucky. He was featured in The New York Times in an article about how some state legislators are feeling stifled by the coronavirus because they cannot get their right wing bills through (our words).

See, Gov. Andy repeatedly has beseeched the Republican-controlled legislature to pass a state budget and any coronavirus legislation — and go the fuck home (again, our words).

You know, because gatherings of large groups of old, white men could be hazardous for their collective health, let alone anyone who might be unfortunate enough to consort with them in their districts. They would be like dandelions of virus hit by a wind blast.

Thayer told The Times his party would agree to leave only if Gov. Andy assured lawmakers of an open-ended special session later, so, you know, they could take up all of their bills.

“People want to use the virus to shut us down and kill bills they don’t like,” Thayer said.

Like the bill that would amend the state constitution to ban abortion. They stuck around to vote on that.

Like a bill that would require voters to present photo identification to vote, which is heading to the governor’s desk for his signature or veto. They voted on that. They also advanced legislation that would limit gubernatorial pardons and allow them to call themselves into special session (a power now held by the governor alone).

And then there is the ding dong Republican from Dry Ridge, Rep. Savannah Maddox, who introduced a measure that would allow people and businesses to sue the governor over his emergency measures during this crisis.

At Thursday’s 5 p.m. Corona Cocktail Hour with Gov. Andy, he was asked about a bill that would allow the attorney general, a Republican acolyte of McConnell’s, to regulate abortion clinics.

You could see the angst in good Gov. Andy’s face and hear it in his voice as he tried to stay calm while answering.

“The question is on a bill that may be moving to allow the attorney general to shut down abortion providers and will I veto it. You know,” he said shaking his head, “I, I… this is the coronavirus we are facing. (Shaking his head again) And every day that we focus on anything else, and I know this is an issue. It is really important to people in numerous ways. But every day we get together and we pass bills on other things, and every day we shift our focus, and every day we focus on something that can stir people up at a time we need them to be calm, I just don’t think we are doing the right thing. I haven’t seen that bill. I don’t know what the bill is. And that is because I focus every day on making sure we can buy as much personal protective equipment as we can, that we can have as many test kits as we can and that we have the right steps in place to protect people from coronavirus. Now is not the time for any traditional battles that might have happened between various parties. Now is the time we all come together. We push every bill aside that might upset or concern people, we pass a budget, we pass any other bill that will help us with the coronavirus, and we go home.”

So for the TLDNR folks along for the ride: Gov. Andy said, 1) let’s focus on the coronavirus, 2) let’s not debate bills that will contribute to our stress, 3), and let’s pass a budget or any other coronavirus bills and go the fuck home (our words, but you know the devil on his shoulder wanted him to say that).

Because, as Gov. Andy said, to repeat: “I focus every day on making sure we can buy as much personal protective equipment as we can, that we can have as many test kits as we can and that we have the right steps in place to protect people from coronavirus.”

To be fair, the legislature did approve COVID-19 relief Thursday, Senate Bill 150. Among other actions, it would loosen requirements for unemployment benefits and extend help to self-employed workers and others who would otherwise not be eligible.

On Thursday, before that bill had passed, Gov. Andy told reporters that he hoped the bill would provide him the room to govern in this crisis:

“I said up here how I feel: There are no Democrats or Republicans. There are only Americans vs. the coronavirus. But I see that. I see it in local governments, where, admittedly, I used to think people were partisan, or even certain individuals were partisan on one way or another. I am not seeing that.”

He did not mention the legislature. Coincidence?