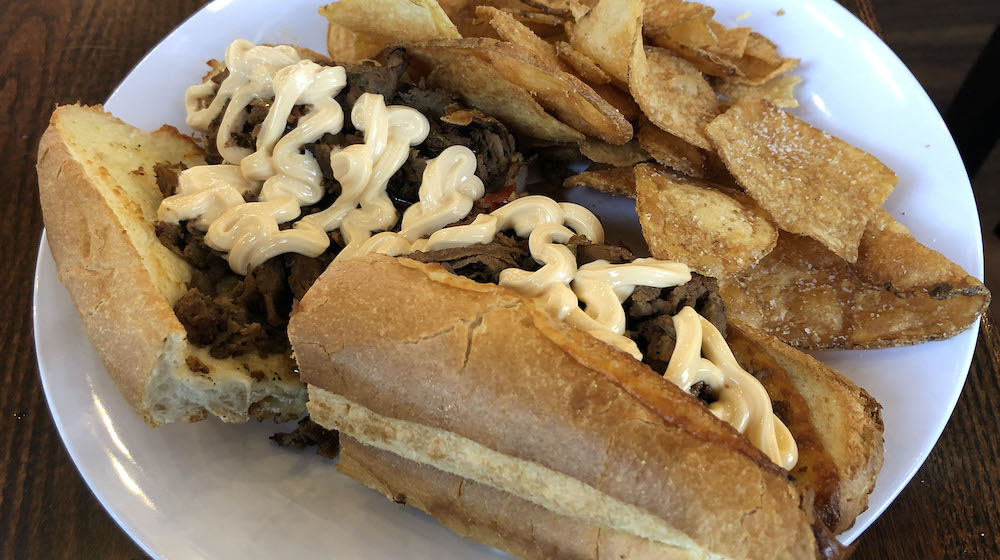 The Southside Cheesesteak at Union 15.

Some say that pizza goes with wine. Some say beer. I’m firmly on both sides of this argument. Want to run a taste test? We headed for The South End to check out Union 15, the pizzeria that opened last summer in Colonial Gardens.

Colonial Gardens, the historic beer garden on the fringe of Iroquois Park, nearly fell to the wrecker’s ball after it closed in 2003. But it’s back, clean and bright and maybe better than ever. Union 15 joins El Taco Luchador, the first eatery in the renovated facility. Biscuit Belly is reportedly coming this summer, and the remaining space — behind the original white pillars of the old Colonial Gardens structure — has “Carl’s Bar” written on its plywood-clad windows, perhaps an homage to Carl Frederick Senning, the German immigrant who developed the property as beer garden and petting zoo in 1902.

This 21st century version of Colonial Gardens was developed by Underhill Associates, the same company that built the popular Westport Village. With its four, trim, white buildings surrounding an open plaza, Colonial Gardens appears set to become a popular dining, drinking and music venue in coming months. You’ll want to go there. Why wait? You can catch a pizza and more and something good to wash it down at Union 15 right now.

Like the other restaurant buildings that frame the Colonial Gardens plaza, Union 15 is a large, open space with high ceilings and floor-to-ceiling windows looking out on the common area. Dozens of lights pop like stars in the open ceiling high above. Bluish gray walls are painted with offbeat slogans such as “Power in the Union,” a salute to the restaurant’s name, based on Kentucky’s entry as 15th state in the union.

A large bar stretches across the back of the room, and its 50 draft beer taps need most of that space. Craft beers are $7 to $9 for a pint; yes, you can have an industrial brew for $4, if you really want to. About 20 canned beers, mostly in 16-ounce tallboys, are $4 to $7. A short wine list is $5 or $6 for a glass. There’s also a selection of cocktails, well drinks and bourbon flights. The food is simple, as you’d expect from a pizza and beer joint. But it’s consistently well crafted, with creative touches that delight. Pizzas and hoagie sandwiches dominate the menu, with more than a dozen specialty pies plus an endless variety of build-your-own choices.

Pizzas come on hand-tossed crusts in 10- or 14-inch sizes and range from $12 (for small veggie, pineapple or white pizzas) to $17 (for most of the large pies). Build-your-own choices start at $10 or $14 small or large, plus $1 to $2.60 per topping. Seven hoagies, all $11 or $12, include Italian traditions such as the meatball grinder or stuffed Italian and such non-traditions as a cheesesteak or Cuban sandwich. Seven starters and three salads round out the menu. Most are under $10, unless you want to pig out on a two-pound batch of wings for $16.

A Tossed Caesar salad ($4 for small, $6 for large) was excellent. Square-cut romaine was pale but crisp and chilled. Tangy Caesar dressing was added judiciously, not over-served. Large slices of Parmesan were scattered throughout, and crisp, herbal baguette croutons were plentiful. The fried Brussels sprouts ($8) may reset your attitude toward this much-maligned vegetable. Crisp, charred, sliced sprouts were buried under wide strips of mild Parmesan and piquant, chopped, pickled pimentos, drizzled with spicy, white, chipotle cream and pale-green basil dressing.

The Southside Cheesesteak ($12) came on a good, hard hoagie roll, split and toasted until the cut sides were golden, then piled high with shaved beef that had been roasted with tomato, green pepper and onion. Soft cheese resembling the traditional Cheez Whiz had been extruded in an artful ripple atop the beef. (Queso blanco is also an option.) Excellent potato chips, crunchy and thick-cut, came alongside.

A 10-inch Don’t Have A Cow veggie pizza ($12) was well-made, with an extremely thin crust with a puffy edge filled with yeast bubbles like good Italian bread. The mozzarella was melty; the tomato sauce spicy and laid on lightly, as it should be. Strips of red and green bell pepper, sliced mushrooms, red onion and black olives were generously strewn uncooked across the finished pizza, a crisp, fresh and healthy veggie mix. I wouldn’t have minded just a little more oven time to get more char on the crust, but that’s picky. It was a good pie. Lunch for two was $38.16, plus an $8 tip for quick, attentive service. •

Noise level: We dropped by for an early Saturday lunch and found an empty, quiet room. Come back on a busy evening, and it may not be so easy to converse. (Average sound level was 71 decibels, the level of quiet normal conversation.)

Accessibility: The entrance on the parking lot side is not accessible, requiring three steps up. The door from the central plaza offers a level entrance, though, and the rest rooms are accessible.