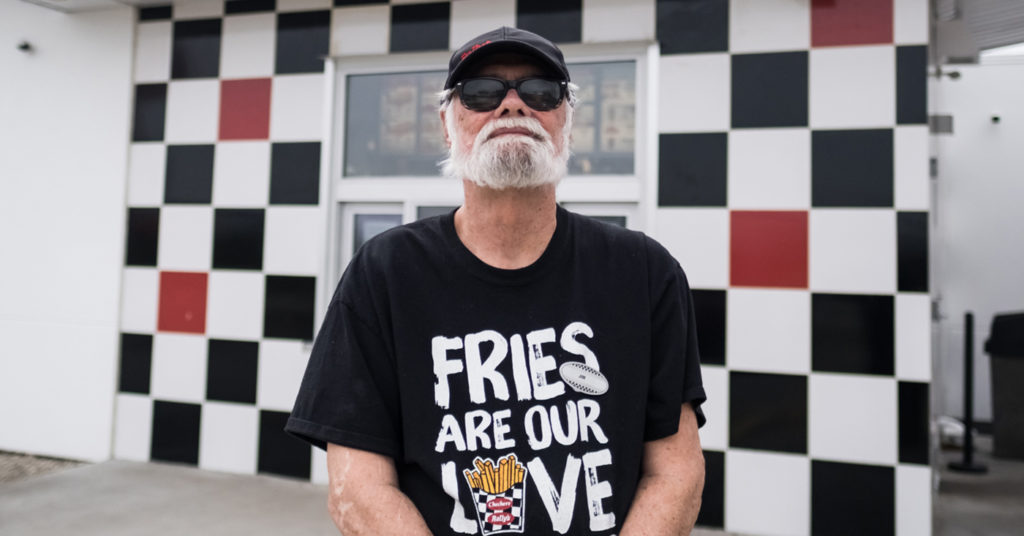 “You know, if you get it, you get it. I’m not worried about it.,” said 74-year-old Jim Peak. | Photo by Kathryn Harrington

While coronavirus cleared out Kentucky businesses last week and filled hospitals in New York City and elsewhere, 74-year-old Jim Peak went about his day as normal in Bullitt County.

He showed up to his Rally’s fry cook shift at 9 a.m.

After five hours of flipping burgers, Peak left to pick up a few things from Walmart.

Outside, he saw a man sitting in a car with a face mask on. Peak laughed.

Inside the store, as Peak looked around for dinner supplies, he scoffed at the picked-over shelves and commiserated with workers about the ridiculousness of crowds of people rushing in to buy toilet paper and food.

Peak has had bypass surgery and a kidney removed and takes nine prescription medications. He is exactly the kind of person health experts say is vulnerable to the worst effects of the virus, yet he is also among those who refuse to heed warnings or who resist them. They believe everyone else is overreacting, and some are resigned to their susceptibility.

Coronavirus is not deadly for most people, but some will need hospitalization. Officials with the federal Centers for Disease Control and Prevention say most people will be exposed to the virus this year or the next. Accordingly, the CDC said we should avoid gatherings and work from home, all to “flatten the curve,” or slow the rate of cases so that hospitals aren’t overwhelmed by those who do need care.

But Peak’s daughter, Kelly Peak Livingston, is, and she has had no luck in convincing him to stay home.

“It scares me a lot because he definitely, you know, falls into the category of people who are more at risk with his age and his medical history,” she said. “He’s somebody that I think if he were to contract it might not have a great outcome.”

She is among people who have family members or friends who just won’t listen to the advice of health experts.

There may be as many reasons for not believing or following precautions as there are people.

Scott LaJoie, an associate professor of health promotion and behavioral sciences at UofL who studies health-related decision-making, said he has seen the young and the old downplay the importance of staying isolated. Those who are younger believe they’re invulnerable to the illness, he said. For those who are older, like Peak, it’s the opposite — they’re unconcerned with catching it and the possible results.

“We see it at all levels of society right now where there are motivators to downplay the virus” said LaJoie, who received his Ph.D. in experimental psychology. “Maybe we’re downplaying the virus because we want to prop up the economy. Maybe we’re feeling lonely so we’ll tell people, ‘Oh social distancing isn’t that big of a deal.’”

Some of that doubt, expressed by three LEO interviewed, is fed by suspicion of the government or the media or both.

Some is even fueled by elected officials such as Republican state Rep. Jim Gooch, an insurance agent and mining equipment business owner from Providence, Kentucky. He made a speech last week on the House floor questioning whether measures imposed by Gov. Andy Beshear were unduly harming the state’s economy, such as closed restaurants and other businesses. He told his colleagues that we must go on with life as normally as possible.

“The thing that I worry about most is that when we come through this, which we will, that we haven’t seen more people devastated, bankrupt, businesses closed that will never ever reopen, and that somehow it could be that the very financial damage that we’ve done affected a lot more people than the people who got sick,” he said.

And U.S. Rep. Thomas Massie, a Republican from Northern Kentucky, drew ire for his social media posts, including one that said closing restaurant dining rooms would “lead to worse public health outcomes than if they had remained open.”

“When this is over, the greatest harm to society will have been the public’s unquestioning acceptance of the unchecked authority of governments to force private behavior and disrupt economies,” he wrote.” I fear the actions taken by our government will make FDR’s internment of Japanese-Americans look like a ‘light touch,’” he wrote on Facebook.

The day after his floor speech, Gooch told LEO that he believes the dangers of coronavirus are “serious,” and social gatherings should be limited to smaller groups. But he wasn’t sure that it was necessary for the governor to shut down businesses such as gyms and hair salons.

Gooch doesn’t want to quit working either. Before he made his speech, he sat through an appeal from a Democratic colleague, calling for the General Assembly to cancel the legislative session out of coronavirus concerns.

“I don’t think that we should shut down here in the legislature,” he said. “The people’s government shouldn’t just quit because there’s an injury. That’s when they need us the most, I think.”

Gooch is 68 and counts himself as one of those at risk of experiencing serious side effects from the coronavirus, but he has personal reasons for not wanting the legislative session to end.

“I’m kind of a people person, and I have a need to talk to folks,” he said, “and I can maintain distance there. I don’t have to hug everybody that I talk to. But that is still important to me, to see people and interact with people.”

Gooch doesn’t want others to experience the anxiety of not being able to do their jobs either. “I mean, we have to work,” he said.

Not worth a canceled vacation

Shane Estes, 39, believes that the coronavirus should be treated as if it were the flu. He is suspicious of the news media, which he said has exaggerated the dangers of the pandemic.

As coronavirus cases in Germany climbed earlier in the month, Estes was still planning on flying to the country for a vacation that he and his partner had been long planning.

“Even if I’m over there, and I’m just wandering around and everything’s freaking closed, I’m out of the country, I am away from home, I am taking a vacation. I’m happy,” he said.

But on March 11, President Donald Trump advised all Americans to avoid nonessential travel to most European countries. Seven days later, Estes was still trying to figure out how to recoup the $1,400 he had spent on planning the trip.

“So yeah, I’m sort of having to self quarantine, because I have no choice,” Estes said.

Estes works in maintenance for an apartment building. His paycheck depends on how many work orders residents call in. And when people are being called out of the country, forced to leave school (and Louisville), can’t pay rent and don’t want to let a stranger into their apartment… there aren’t as many work orders.

“And I’m sitting here trying to figure out, now, how am I going to pay my bills?” Estes said. “I live comfortably, but if I lose money or lose my job, it isn’t going to take long before I’m in a box.”

‘POLITICAL DANCING’
Mick LaGrange, 61, said he worries that the virus is being used for political gain — pointing to the stimulus bill that House Democrats sent to the Senate two weeks ago, repeating a rumor that they had stuffed it with abortion funding (untrue, according to Politifact.com).

So, last Wednesday, LaGrange was at his job at a Jeffersonville gun store, performing background checks and helping out a crowded shop of customers. The next day, he planned to drive to a firework store he owns near Corydon to continue prepping it for summer. While not working, he’s been making regular grocery trips.

“I’m not saying it’s not serious,” said LaGrange about the coronavirus. “But I think some of this has been knee-jerk and political dancing to some extent.”

But, LaGrange is washing his hands frequently, cognizant that he should be careful to not bring home germs to his wife, a cancer survivor. His daughter, a nurse practitioner, has chastised him for not taking coronavirus as seriously as she thinks he should.

“I heard somebody say today, 50% of the people are panicking, and they’ve been taking it too serious, and the other 50% are not taking it serious enough, and it’s probably right in both cases,” LaGrange said. “You know, so there’s something in the middle I think that makes sense.”

Jessica Dueñas is staying home. With Kentucky schools closed, the 35-year-old Jefferson County Public Schools teacher has left her home only to go to the grocery store. She’s not worried for her own health, she said, but for the health of others.

“I just feel like, you know, it’s a time period where I need to stop being selfish and put others ahead of me in my mind,” she said.

And there’s one person in particular who she’s worried about: her mother.

Amable Dueñas, Jessica’s mom, is 80 and living in Costa Rica. Every day, she rides a bus into San José’s crowded downtown to visit with friends.

“If you catch it, it can kill you,” Jessica Dueñas told her mother during one of their recent daily phone calls. “My mom’s response was, ‘If I die, I die,’” said Dueñas.

Dueñas’ mom might not care if she passes, but Dueñas would.

She still wants to visit her mother in the summer and to take her future children there to visit.

“I remember when I lost my father in April of 2018, I mean, you’re never ready for it, but when he died suddenly, my heart was just ripped apart,” said Dueñas “And there is this emptiness there that when I think about him, it hasn’t left. “

As for Peak, he isn’t completely blasé about the health of others. Every day before work, Peak takes his temperature, checking to see if he needs to stay home from work.

“I just want to make sure that I’m not passing it onto anybody if I do catch it,” he said.

But he is not always practicing social distancing.

On his trip to the grocery, the eggs and milk were out, but he was able to find a packet of apple chicken hot dogs. He took them home and cooked them for dinner. When LEO called, he was still chewing on his meal and the thought of the frenzied shoppers at Walmart.

“I don’t know, I have a problem with people being idiots,” he said. •