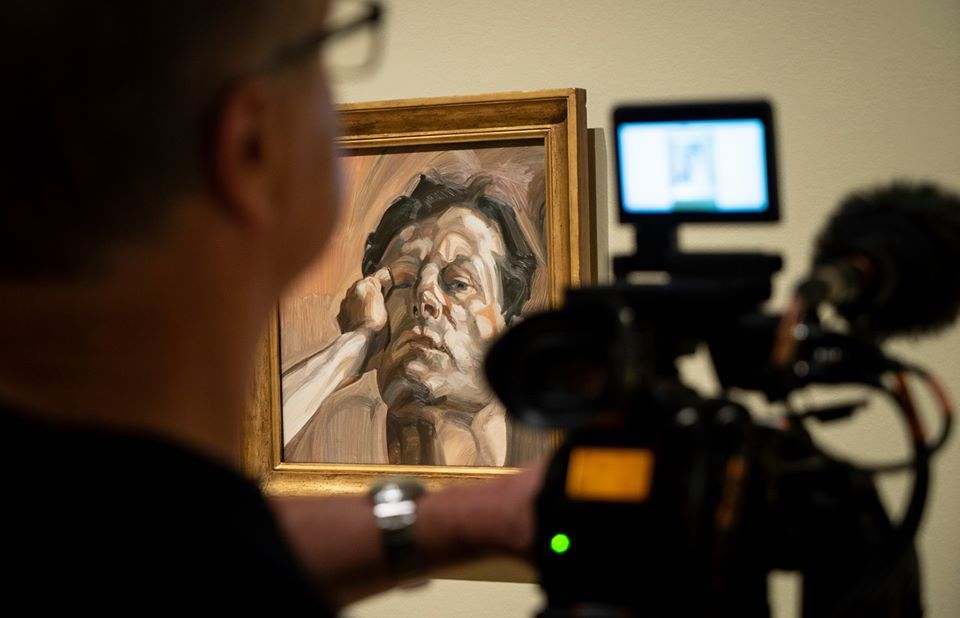 [Editor’s note: After this article was published, The Speed and Speed Cinema announced they are closing to the public until March 31.]

“Exhibition On Screen” is an ongoing film series that offers a cinematic immersion into art, accompanied by behind-the-scenes insights about specific exhibitions culled from renowned historians, curators and visual artists. We recently caught up with that group’s London-based director David Bickerstaff to discuss his latest film, “Lucian Freud: A Self Portrait,” based on Freud’s work in a recent exhibition at Royal Academy in London. It is scheduled to be shown twice at the Speed Art Museum this weekend.

LEO: Why do you think bringing an exhibition to life on the screen is an important companion piece to the collection itself?
David Bickerstaff: It’s interesting, actually, because [Producer] Phil Grabsky and I have made several films together, and we started out by making more traditional documentaries. But then, when we were working on a film about ‘War Horse,’ which was a theater production at the [Royal] National Theatre, we began to think about how event cinema might apply to visual art exhibitions. We realized that it really is a great platform for introducing people to some of the world’s most amazing collections that, in some cases, may only get brought together once in a lifetime, and never travel. There’s no substitute for physically being inside an exhibition and in front of paintings, but, I think cinema gives you the next best thing. With our films, you get an intimate look at the artwork and also some relevant background information from some very well-informed people.

Was there anything about directing this particular film on Lucian Freud that was special for you?
Being an artist myself, I’m always curious about the underlying methodology and technique behind the work. So, I was excited to talk to experts about those sorts of things. I also felt quite privileged to get to go inside Lucian Freud’s studio for this one. That was an extraordinary experience being in that atmosphere and getting a glimpse at his processes.

Did your opinion of Freud change during the process of making this movie?
Absolutely. I mean, each one of these projects requires an enormous amount of research. It’s like writing a mini-thesis, really. There is stuff that I had no idea about when I began the process of uncovering Freud’s story that has forever changed the way I will look at him as an artist and as a person. What I knew beforehand was that there’s a lot of gossip around Freud, about how many children he may have had by any number of lovers, but that seems to get in the way, a little bit, of his art because he was an amazing technician. And when you look at his work, it always seems very flawless and very well-developed, but actually he struggled a lot with painting, and he took a lot of time with it, which was something I didn’t realize. The closer you look, you start to understand the man’s struggle with art, and you can sense that he would often have to fight against himself, to tell you the truth. He didn’t really concern himself with all the gossipy bits, although those things are what make his mythology to a certain extent. It is interesting that, during his lifetime, Freud never mixed his friends, you know, he would always see people one to one, so I guess you could say that he was in control of his own narrative to a certain degree.

Louisville audiences will get to see for themselves when ‘Lucian Freud: A Self Portrait’ is shown here this weekend. Have you ever been to the Speed Art Museum?
No, but I am hoping to check it out someday. It looks amazing. For now, I’m pleased that this film will make it there on my behalf.

What can you tell us about your own background and education?
I was born in Melbourne, and I actually went to art school in Australia, where I studied fine art and painting. Then, as a lot of Australians do, I took a tour of Europe, and I decided that, creatively, I wanted to situate myself in the UK. I was still painting when I got here, but I eventually moved into digital arts and filmmaking, which is how I came to work on feature films.

Have your techniques as a filmmaker evolved over the years?
Yes, because I was not originally trained as a filmmaker at all. So, everything about engaging in this work has been a process of learning and evolving. Since I do a lot of my own camera work, I’ve come to understand how an image is made, for example. And I also discovered that I really like the editing process. It’s a bit like sketching. You’re putting things together, making stories work, and bringing it all to life.