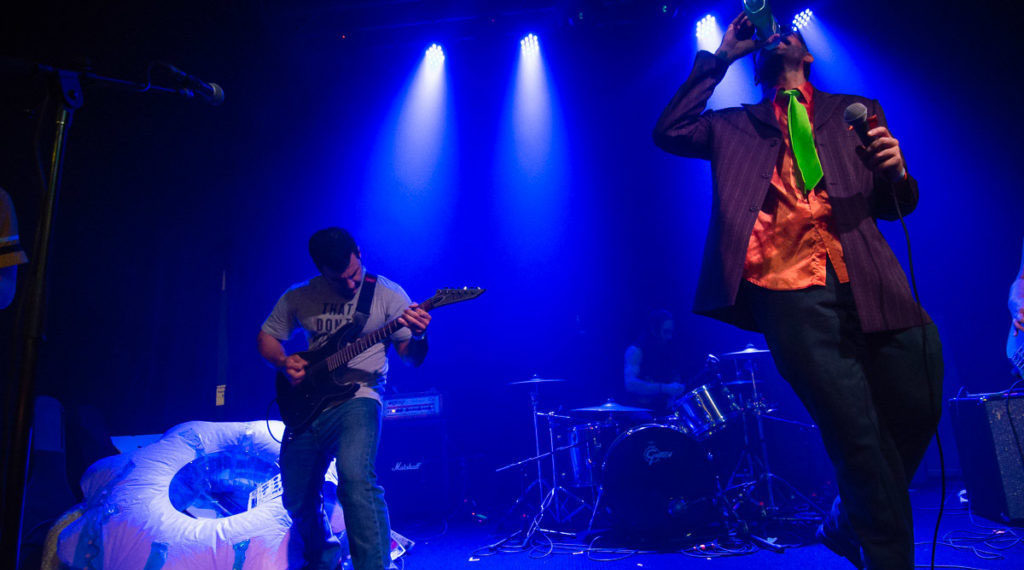 When the local thrash metal band Belushi Speed Ball took the stage at Kaiju on Saturday night, singer Vinny Castellano put his head through a piece of cardboard to break the “fourth wall” and deliver a “public service announcement” about the coronavirus. The band’s manager, Señor Diablo, was wearing a makeshift hazmat suit. Hula hoops were given to audience members to promote social distancing. Rolls of toilet paper were being handed out. Guitarist Kyle Phelps, who also manages a grocery store, warned people of the dangers of panic shopping and hoarding.

The band, known for eccentric theatrics and conceptual concerts, delivered something that was part parody but mostly a serious attempt to raise awareness and keep the audience as safe as possible. And, on a weekend when musicians and venues were weighing whether to cancel shows, Belushi Speed Ball said it was performing mostly in support of Kaiju’s staff.

“Kaiju has been there so much in the past, we only felt it was right to at least be there for them before the city goes on total lockdown, and suddenly you have all of their service staff that have nothing for who knows how long,” Beau Kaelin, aka Señor Diablo, said late last week.

Now, after the governor ordered all bars to close and a limit on public gatherings, all concerts will likely be canceled or postponed for at least a few weeks, a step that’s indisputably necessary but will also have a rough economic impact on places such as Kaiju, as well as virtually every other corner of the local music scene.

“It’s going to be hard to keep it going, I would imagine,” said McKinley Moore, who books Kaiju. “We’re going to be closed for two months. There’s going to be a lot of people out of work.”

White Reaper was in Albuquerque, New Mexico last week when they decided to postpone the final two weeks of their headlining tour, which included two shows in Kentucky. Local and state governments were starting to restrict large gatherings, and since the venues they had booked were between 250- and 1,000-capacity rooms, they had little choice but to get in the van and drive home to Louisville.

“Basically, it’s the last thing that you want to do, is cancel shows, but once it affects people’s safety, is when you have to make that call, and I think that’s what it was about for us and a lot of other bands,” White Reaper keyboardist Ryan Hater said. “It’s really just about public health and to do everything that you can to make sure everyone stays safe.”

While the future is uncertain, White Reaper still has shows on the horizon, including a few major festival appearances and an opening slot supporting Pearl Jam on their European summer tour. While there’s no news about those dates yet, Hater said, one of the things that music fans can do, is not to get an immediate refund on postponed dates.

“If the show is postponed, don’t rush to try to get a refund right away,” Hater said. “Wait for the make-up date, whenever it might come around. If you truly like and support that band, then you should just wait for them to come back, instead of rushing to get a refund for your ticket.”

The local punk duo GRLwood had big plans in March. They were set to tour all the way to South By Southwest, the annual March music festival and conference in Austin, Texas. But South By was canceled, and GRLwood also decided to call off the rest of their March dates. They hope to resume their tour April 7 in Rock Island, Illinois, but they’ve already lost a lot of opportunities to make money and network.

Using any extra money to buy merch or albums from bands is a solid way to support musicians in times like these, especially in the case of bands like GRLwood who loaded up on extra stock before having a tour canceled, but Forrester has another idea in terms of how artists and office workers could help each other out.

“It looks like, right now, the people that are getting affected the most are parents,” Forester said. “Some parents still can work, and some are still going to offices to work. If you have child care needs, reach out to a local artist. I feel like that’s a great idea.”

Things have changed rapidly, and this is still a fluid situation. Two weeks ago, these measures seemed like a distant possibility, and now no one is sure when things will return to normal. The federal Centers for Disease Control and Prevention has recommended holding no events with 50 or more people for eights weeks, but, in reality, that time frame depends on how long it takes for the virus to be contained.

Billy Hardison, partner at Production Simple, the company that books Headliners Music Hall and Old Forester’s Paristown Hall, said, at this point, 90% to 95% of its shows that have been postponed have already been rescheduled or are awaiting rescheduling. He said that fans and patrons have been really helpful by not asking for immediate refunds. Hardison said concert dates will likely continue to shift, but that behind the scenes people are working on sensibly restructuring the logistics of tours.

“So, right now, you might still see stuff on our calendar, but ultimately it’s only on there because we’re waiting in line to be contacted,” he said. “Some agents are saying, ‘Hey, I know you’re waiting on me, I’ll get to you,’ because everyone is really working together on this — agents and promoters and managers and labels and the bands. Of course, I’m speaking at the national level. And, of course, the local artists, they see what’s going on, and they’re following suit, and we’re basically trying to move everything a far enough distance away, and make room for it. I wish I could create a 64 day October.”

Like Belushi Speed Ball, Hardison also worries about the people who jobs depend on concerts happening. And he said we should be asking ourselves, as a community, about ways to help.

“Are there some other ways we can raise money for these workers?” Hardison said. “This is a nationwide problem. Touring crews, merch sellers, techs, stagehands, you know, these are people on the road and in the venues. They really don’t have a safety net. I mean, as independent business people, we don’t either, but we chose to make the bigger choice of what we’re doing, risk or reward. We gamble for a living. They don’t. So, we really feel for them.” •