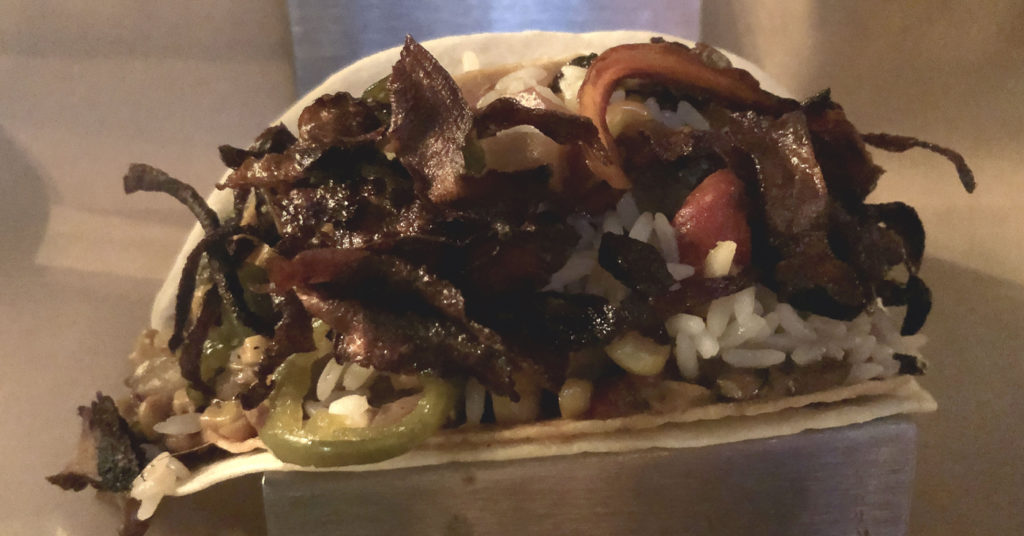 The Sutan taco at Agave & Rye is full of tasty veggies, cheddar and rice. | Photo by Robin Garr.

OK, Boomer, buh-bye. Yo, Millennial, come on in! That’s the sound of generational change on the north end of the Baxter Avenue strip, as the classy Bittners furniture and upscale fare of the defunct Ward 426 makes way for the bright, street murals and fancy tacos of Agave & Rye.

Ward 426, a venture of former Jack Fry’s Chef Shawn Ward and the late Dean Corbett, held on for a good, five-year run after supplanting the Brewery, a popular bar. But perhaps upscale fare and quiet class weren’t an ideal match for Baxter Avenue, while street art and what they call “chef-inspired” tacos may fit right in. Happily, boomers are still warmly welcome, so a sizable group of us crammed into a circular booth in the game room — where rows of vintage arcade games can be played free — and had a great time the other night.

Sure, the fancy furniture and elegant decor are all gone, but what replaces them is funky and fun. Giant wall murals were spray painted by a local street artist. Many of the tables were fashioned from hardwood by a local artisan. Eye-catching chandeliers with hanging orbs of waffle-cut, lavender and pale-green art glass were also locally produced.

Agave & Rye is part of a small, regional chain, with two shops in Greater Cincinnati (one on either side of the Ohio) and one in Lexington. The menus appear to be the same at all four, and I can testify that the Louisville bill of fare is offbeat, interesting and consistently well prepared. There are 14 tacos to choose from, ranging from $4 (for The Plain Jane, with a familiar filling of ground beef, cheese, lettuce, tomato and sour cream) to $11.50 (for The Crown Jewel, with butter-poached lobster and shaved truffle on mac and cheese).

An additional half-dozen menu items, categorized as “Not a Taco,” consist of entrée-size portions ranging from $10 (for Kick Ass Texas red chili with steak and aged white cheddar in a bread bowl) to $18 (for The Proper Dinner, whiskey-and-Coke-braised short rib with whipped potatoes and glazed baby carrots). A dozen munchies, good as small plates or apps, are $4 (for taqueria-style elotes or chips and salsa) to $12 (for Kentucky Hot Brown Sliders or Irish Nachos topped with braised pork butt, spice bacon, queso, mozzarella and fries).

As the name Agave & Rye implies, tequila and bourbon get top billing, but you can get just about anything you want from the extensive bar list, including a broad selection of creative cocktails. I enjoyed the namesake Agave & Rye cocktail ($11), a riff on the Manhattan. It was a bright-garnet potion served in a wide coupe glass, fashioned with bourbon and Benedictine, Peychaud’s and Angostura bitters and dashes of Hennessey cognac and Luxardo Maraschino liqueur.

We passed appetizers around the table and enjoyed them all. The elote ($4) could pass muster at a good taqueria. A thick cob of corn had been smeared with a mouth-watering mix of cotija cheese, spicy Tajín Mexican seasoning, cilantro and lime juice. A topping of sliced almonds added an appetizing crunch to a generous bowl of crisp, deeply roasted Brussels sprouts ($8) slathered in Dijon aioli and shredded Parmesan.

We passed on desserts, although chocolate cake and carrot cake ($9.50 each) were tempting. Our dinner for two came to a thrifty $35.15. Outstanding, friendly attention from our server, P.T., earned a $10 tip. •

Noise level: The scene was loud but not intolerable on a week night. (Average sound level was 77 decibels, an elevated level of conversation, with peaks to an attention-getting 83 decibels.)

Accessibility: It is currently difficult for wheelchair users. The patio leading to a level entrance is roped off for construction, and some dining areas are up a few steps. Wheelchair users are advised to call ahead to arrange entry through a normally locked door via the deck and a rear entrance. A separate unisex restroom is marked as accessible.