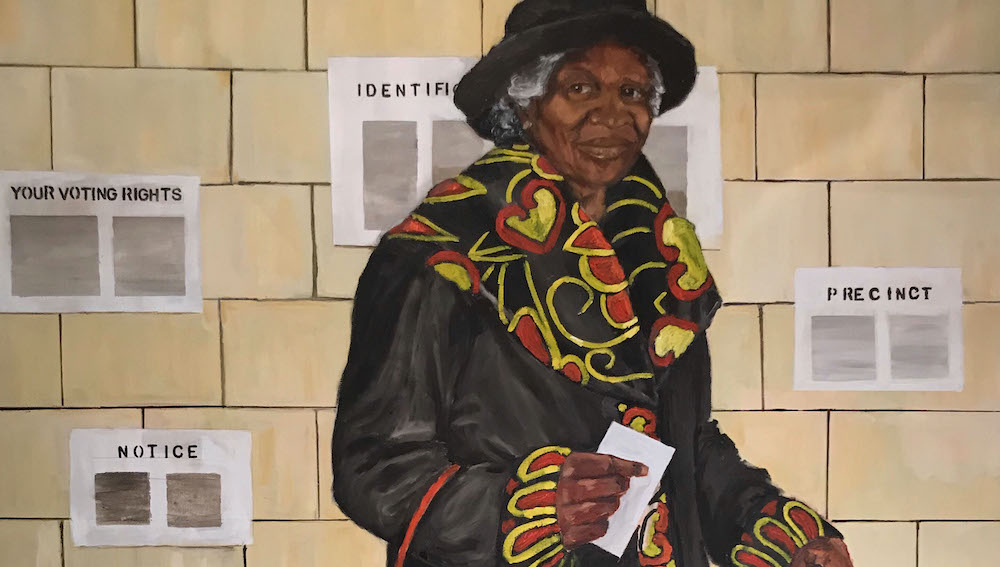 A detail of 'Grandma's Vote' by Sandra Charles, an oil on canvas painting that will be in ‘Ballot Box’: An LVA Exhibit for Metro Hall Curated by Skylar Smith.

Game Show Night!
Kaiju
Free  |  10-11 p.m.
Will Kaiju comedians be able to answer tough trivia questions? Probably not, but their answers are guaranteed to be funny.

Introduction to Mindfulness
Portland Library
Free  |  6:30-7:30 p.m.
Mindfulness mentors will teach you how to pay attention and practice meditation “to navigate the complex, delightful, and sometimes overwhelming responsibilities of life.” Call 574-1744 to register for this class.

Kentuckiana Cluster of Dog Shows
Kentucky Exposition Center
Free (for one day only)  |  8 a.m.-8 p.m.
What kind of dogs does the Kentuckiana Cluster of Dog Shows have? Little dogs, big dogs, scruffy dogs, happy dogs, silly dogs and plush dogs. Everywhere you look — dogs! They’re running, being examined by judges, jumping off docks, hunting in bales of hay. Take it all in while browsing over 50 vendor booths and eating Ehrler’s ice cream. The dog show runs through Sunday, but on Thursday, admission is free.

‘Ballot Box’: An LVA Exhibit for Metro Hall Curated by Skylar Smith
Mayor’s Gallery
Free  |  Noon-1 p.m., 5-7 p.m.
Voting rights were hard won in America. Women finally received the right in 1920 and the Voting Rights Act of 1965 made it easier for African Americans to cast a ballot. Curator Skylar Smith organized a celebration of these events with the art exhibition “BallotBox.” (It took a village to make this show happen — support came from the Kentucky Foundation for Women, Great Meadows Foundation, Louisville Metro Government’s Office for Women, League of Women Voters, Frazier History Museum and Louisville Visual Art.) The artists in the show are Sandra Charles, Brianna Harlan, Jennifer Maravillas, Taylor Sanders, Penny Sisto and James Robert Southard. It is free and open to the public. From noon to 1 p.m., come for tours of the exhibit. The opening reception is from 5 to 7 p.m. and will include a conversation between Harlan and her grandmother, Civil Rights activist Mattie Jones.

Nerd Nite Louisville
Gravely Brewing Co.
No cover  |  7-9:30 p.m.
Grab a beer and listen to Louisville professionals talk about what interests them. First up is attorney Shannon Fauver who will discuss the ethical and moral quandaries in “Star Trek.” Aaron McGahee, a veteran and founder of A Nerd Like Me, will explain life through the lens of video gaming. And nurse educator Kaitlyn Michelle Distler will give a fact-based talk about coronavirus.

Art + Feminism Wikipedia Edit-a-thon
Speed Art Museum
Free  |  5-8 p.m.
Join the mission to close the gap in Wikipedia entries for women and minorities. Bring your laptop, grab a refreshment and learn how to make a Wikipedia account, edit articles and use library resources to add citations to existing pages for local and regional female artists.