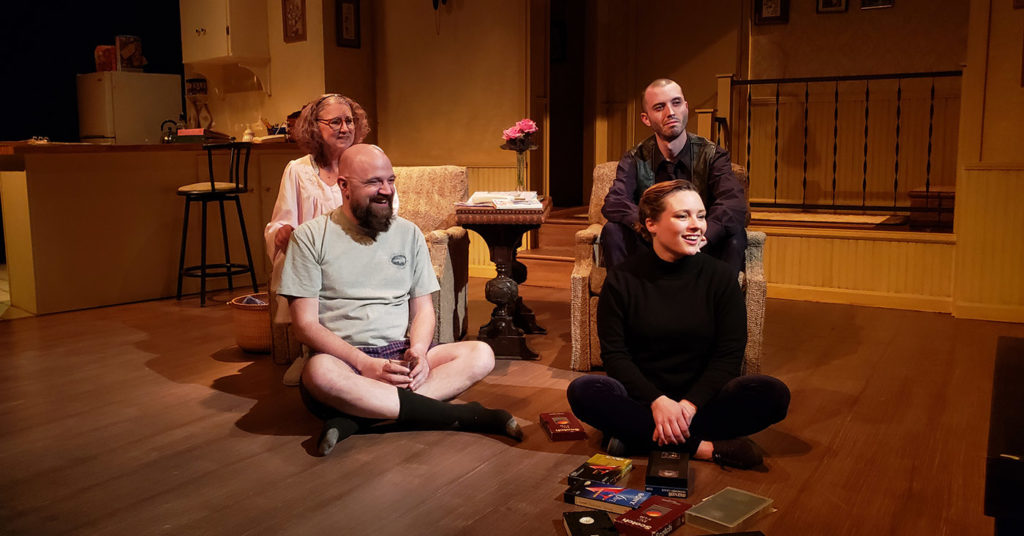 That’s the crucial thing we learn in the opening moments of playwright David Rabe’s “Visiting Edna,” an epic masterpiece that premiered at Chicago’s Steppenwolf Theatre in 2016. We learn it from a character listed in the program as “Actor 2,” played here by Neil Brewer. Actor 2 is more than a number, though. He is, in fact, Cancer. The cancer that has taken up residence in Edna’s body. Cancer is only one of the physical ailments that afflicts Edna at age 78. As Cancer tells us, she also suffers from congestive heart failure, diabetes and arthritis “that feels like a vicious slash beneath her clavicle and down, like a knife through the throat of a sheep.” In addition, Edna has had a colonoscopy stemming from irreversible diverticulitis. Her life is filled with vividly depicted pains and humiliations (like the embarrassing memory of a leaking colostomy bag at a social event).

And yet, Cancer — who blandly describes Edna as his “host” — as if he were a welcome houseguest — is “desperate to live. Hungry to live. Praying to live.”

What it is that Edna wants to live for is another question. It’s the central question in this, play, as it presumably is in all our lives.

As nearly as I can tell (after scanning newspaper databases), the Bunbury Theatre production of “Visiting Edna” that opened last weekend in a brilliant staging co-directed by Steve Woodring and Skylar Vest is only the second time local audiences have had an opportunity to see this play. That, I submit, tells us more about the risk-averse nature of the theater companies than about the play itself.

As we fill in more details, we soon discover other things about Edna, including the fact that she does not want to revel in her past. When her son Andrew (Brian Hinds) flies into Iowa for a visit, she insists that he take away all of her old photo albums. She wants nothing to do with those images of earlier, happier days because they bring her nothing but sadness.

Still, it’s stories of the past that shape this play.

In a particularly revealing moment, Andrew asks his mother to corroborate what he views as a vivid but implausible childhood memory: a lurid and inchoate vision of his parents taking him to the scene of a hotel fire and watching people leap to their deaths from the upper floors. She first tries to deny that he could remember such a thing. Then, she tries to absolve herself by curating the past.

Curating the past is something we all do. And for Edna, inhabiting a painful present looking toward a dire future, it may be her desire to revise the past — or to redeem it — that accounts for the urgency of her life force.

This is a play filled with the stories and anecdotes Edna and Andrew recount and debate as they reveal their lives. Rabe is a prolific writer of award-winning screenplays and plays (including a series of plays he wrote about his experiences in Vietnam). “Visiting Edna” was produced after a long hiatus, but he retains the touch of a master storyteller with a poetic ear for the spoken word and the compelling image. It’s a play that verges on being a novel.

And one thing is certain, it takes extraordinary performances to make this play work and especially to capture the essence of Edna.

And that is exactly what Rena Cherry Brown delivers. She’s one of those rare actresses who with a single breath can change the air in an entire theater. And the vitality with which she creates an Edna filled with fears, hopes, dreads and secrets and wishes is enthralling to watch. It’s certainly among the most inspiring performances I’ve seen in recent years.

And Brown’s performance is matched by everyone else in this fiercely committed cast.  As Andrew, Hinds brings both desperate vulnerability and a sense of resolve to the task of untangling the truths about his youth. He’s a man now, with a man’s responsibilities, but he is also a son, still caught up in his childhood, yearning to be cared for the mother he now must care for, holding his hands over his eyes, peaking through his fingers, both yearning and fearing to see clearly into the past. It is the mother and son’s  shared desire for and fear of the past that unites and divides them, and infuses this play with drama.

And then there are the three characters known by their numbers.

Katherine Martin plays the character known as “Actor 1” – a television.

Both Actor 1 and Actor 2 are both desperate suitors for attention. “Television” is constantly wheedling Edna and Andrew to turn her on and watch – and when Andrew picks up the remote and flips channels, Martin turns in a bravura performance that captures the empty essence of cable television.  As for Cancer, Brewer plays him as a suave Casanova obsessed with Edna – his “one and only.” It is as chilling a performance as I have ever seen, and there are moments when his smooth, unflappable seductions feel like a rampant mass of sleek cells reveling in their fatal work.

Finally there is Actor 3, played by Matt Orme. Orme is an actor who can do more with a single word or gesture than most people can with five pages of dialogue. His black-winged arrival here — in a dream sequence that comes after a couple of ingeniously connected digressions (discussions of an Edgar Allan Poe short story and a TV screening of a John Wayne Western) — is a chilling and comic stroke.

This is a deftly created production all around, with extremely effective sound design by Victoria Campbell, a set by Tom Tutino, costumes by Mia Seitz and lighting by Lindsay Krupski. •