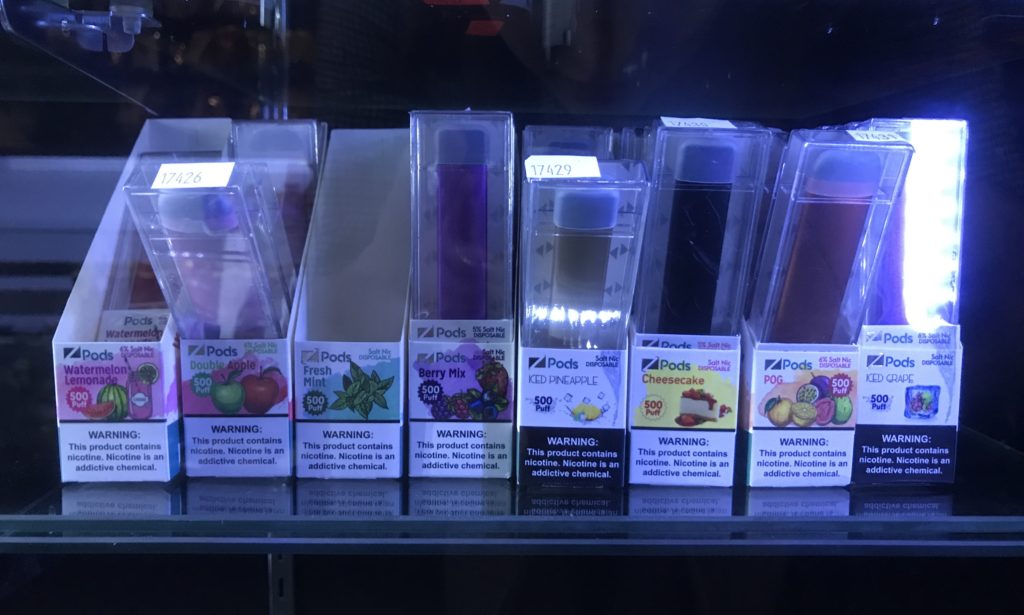 Three weeks into a nationwide ban on flavors for the most popular types of e-cigarettes, meant to discourage underage use, Louisville teenagers can still easily vape tantalizing flavors such as Blue Raz and Watermelon.

Juul, with its once-popular flavors such as mango and mint and its sleek, easily-concealable design, was previously prized by teenagers, capturing much of the blame for skyrocketing vaping rates among minors. But, since the company withdrew fruit flavors last October and since the country-wide flavor ban took effect Feb. 6, Louisville students say that Juul is out and disposable vapes including Puff Bar and Mr. Fog are in.

LEO talked with several local teenagers about disposables. They were not vaping, but they described the habits of their peers.

“I think everybody got turned off of Juul because of all the regulations that’s being put on them,” said Dexter Snow, a sophomore at Atherton High School, sitting with friends at a Heine Brothers’ location off of Bardstown Road.

Karenna Longton, another Atherton sophomore, explained why disposable vapes are popular: “They’re easy to dispose of and hide when you need it, from what I’ve heard.”

The day the national flavor ban started, the Foundation for a Healthy Kentucky sent out a press release, warning that teenagers were already starting to catch on to the loophole.

“Already, dozens of low-cost, Juul-like disposable e-cigarettes are on the market,” said Ben Chandler, president and CEO, in a statement. “In the midst of a youth vaping epidemic, this loophole isn’t doing any favors for parents trying to keep their kids healthy and tobacco-free.”

Those “Juul-like disposable e-cigarettes” are easy to find in Louisville shops.

A couple of weeks ago, Up-N-Smoke on Barret Avenue started carrying ZPods, a disposable e-cigarette brand with flavors such as Watermelon Lemonade and Cheesecake, said the shop’s manager, Ayden McCulloch. The thin vape pens, which look like Juuls, were kept in a locked, glass display case. McCulloch said he checks IDs to make sure customers are at least 21.

Disposable e-cigarettes are cheap, around $8 to $9 a piece, said Bonnie Hackbarth, vice president of external affairs for the Foundation for a Healthy Kentucky, a nonprofit advocacy group.

National news outlets, including NPR and The New York Times, have written stories about the new popularity of disposable e-cigarettes among teens. A peer-reviewed medical journal article cited by NPR, Tobacco Control, found that disposable pod-mods were popular among college students at Kean University in New Jersey, as well as users on a Reddit vaping forum.

But, private and public school officials in Louisville are unaware of the trend.

“In terms of these disposable vapes that you are talking about, we just haven’t really seen any change in that or really anything associated with that,” said Jennifer Brislin, a JCPS spokeswoman in a voicemail.

Cindi Baughman, dean of students at the private Assumption High School, said she suspects some of her students are vaping, but she can’t catch them or identify what they’re using.

“I’m really not confiscating much these days, so I really don’t know,” she said.

“I know that people say the tobacco is gross,” she said, referencing one of Juul’s few remaining flavors. Anna said that her peers get e-cigarettes from older friends or from shops that don’t card.

The Louisville students mentioned only Puff Bar and Mr. Fog as popular disposable vape brands, but others include Stig, Posh, blu and Viigo.

Two Atherton students said that teen vaping has not decreased in popularity since more regulations, including a ban on sales to those under the age of 21, have taken effect. But they did say that Juuls have gotten harder to get. McCulloch, the vape shop manager, pointed out that because of the new age restrictions, students can no longer get e-cigs from upperclassmen. In September, JCPS checked its log of vaping violations incurred by students and found a decrease since the school launched its anti-vaping campaign, Vaping Equals, said Breslin.

But, McCulloch said he believes teenagers are going to find a way around vaping restrictions. If the loophole for disposable vapes is closed, they could still switch to flavored vape products without cartridges.“They all have their ways of accessing these things, and I feel like the laws and things we have in place are just superficial. They don’t really do anything,” said McCulloch.

Hackbarth said that when it comes to vaping prevention measures for teens, a combination of measures can make a difference.

The Foundation for a Healthy Kentucky is still seeking out more vaping restrictions in Kentucky. The bills, sponsored by Rep. Jerry Miller, R-Louisville, would tax e-cigarettes at 27.5% of their wholesale price, ban online sales for Kentucky businesses and move sales of cartridge-based e-cigarettes, including disposables, to 21-and-over shops, which are believed to be better at vetting the age of buyers.

The Coalition for a Smoke-Free Tomorrow estimates that the tax would decrease disposable e-cigarette sales by approximately 12%.