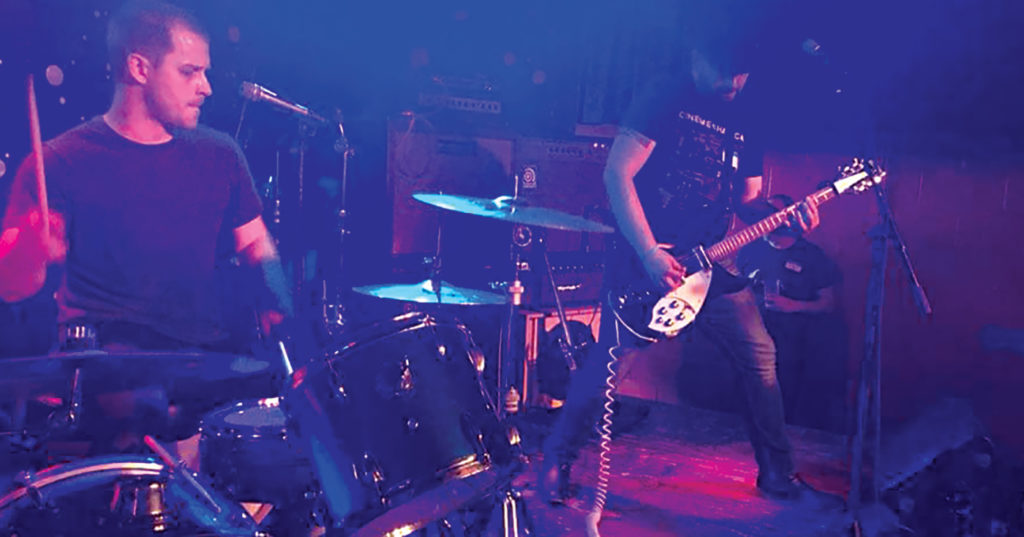 Sam Scholten of Bon Air knows how to spin heartbreak into a song. And he wrote “The Blue Line” with a still-bleeding wound — a figurative one, that is.

“I’d just been shot down by a woman I had the worst crush on, and I was still pining over her when I went to this three-day, noise rock summer thing in Chicago called the PRF BBQ,” Scholten said. “That year, it was right off the Blue Line — one of the only two Chicago ‘L’ lines to run 24/7, year round — and I got a room at O’Hare so I could just stumble off the train at the end of the night and decompress. So, I was having a blast by day, heartbroken at night, and through this, the Blue Line gave me that perfect existential ‘Wichita Lineman’ imagery. To me, the train was in a linear dimension of existence where I, nothing more than a passenger, existed apart from this woman whose life I couldn’t be in.”

But, Scholten hopes people take more from “The Blue Line” than just the story of his personal love life. He thinks everyone has been in a similar situation before. Specifically, he wanted to “acknowledge the pain and sadness” that it brings.

“I wrote the song out of catharsis but in a dark sense,” he said. “I also felt lucky because my real life had given me the perfect scenery and characters for a short existential story. Philosophically, I wanted the song to deal with existential themes like being and nothingness, futility and so forth. Everyone’s been shot down by a crush — there’s nothing special about that, but being on that train, there was just no way I could pass up the opportunity to turn it into a song.”

“The Blue Line” is brisk and mid-tempo, meshing an alt-country jangle, Big Star pop and a Johnny Thunders sadness. And Scholten’s loose, whispery rasp is the perfect vehicle for the emotional heaviness of the song. Like its namesake, the song rolls smoothly from start to finish, the instrumentation bleeding together to create a pleasant melancholy.

“I was goofing on some Mark Kozelek-type guitar lines when I hit on one that sounded like me,” Scholten said. “I was also listening to a lot of Big Star at the time, so that was my headspace when I finished the idea. However, with my roots, that Bob Mould sound, was going to come through one way or another. I’m a child of the ‘90s, and that Bob Mould, Hüsker Dü sound was everywhere, from Nirvana to My Bloody Valentine to Sebadoh and Guided By Voices.”

What is perhaps the most memorable revelation about “The Blue Line” is where the band recorded it and whose instruments they got to use.

“We had the chance to record at Ardent Studios, an extremely cool space where Big Star and countless other luminaries made records,” Scholten said. “One day, our engineer was playing this beautiful Gibson ES-330. Turns out it was Chris Bell’s guitar, and he hands it to me when he gets to the solo part. Hands quaking, I plug it in and crank it, and it was otherworldly to hear. To top it off, I also played the same Mellotron Alex Chilton played on Big Star’s ‘Kangaroo.’ I admit, I got emotional when we started mixing the song.” •