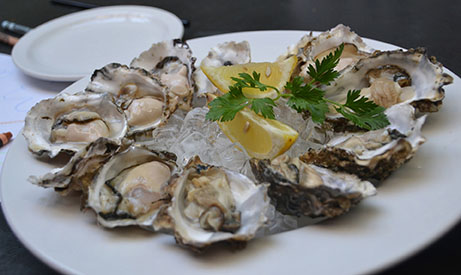 Flesh of the skink?

Valentine’s Day, or St. Valentine’s Day, has roots that go back to the Roman festival of Lupercalia, held in mid-February to herald the coming of spring. It included fertility rites and a lottery to pair men and women. For you haters who think Valentine’s Day is merely a way for Hallmark to sell cards and flowers, the first, formal valentines showed up in the 1500s with the first commercially printed cards made by the 1700s. Hallmark first started offering Valentine’s Day cards in 1913.

Regardless, it makes perfect sense that couples would enjoy a romantic, perhaps even candlelit, dinner, in the dark days of February.

So, if you are planning a romantic meal, it also happens that for millennia, people have regarded certain foods, for a variety of mostly whimsical reasons, as being able to produce amorous feeling upon consumption. These so-called aphrodisiacs are named after the ancient Greek goddess of love, Aphrodite. In Rome, she was called Venus, but “venusiac” somehow doesn’t have the same ring to it, sounding more like space aliens than food to put you in the mood for love.

Oysters and chocolate (though not together) are prominent among foods associated with arousal. And we’ll get to them shortly, as well as several others that have enjoyed such reputations, too.

Happily, some of the very earliest aphrodisiacs have faded from the canon.

For example, I’ve never encountered “flesh of the skink” on a restaurant’s Valentine’s menu. Why skinks?

Perhaps because the little lizards’ bodies are long and rather phallic and they move very fast, which might mimic a vigorous potency. (It bothers me that I can actually come up with a rational for this.)

Speaking of phallic-shaped foods, carrots and asparagus had their day in 16th to early 18th century Europe. They consistently showed up in dozens of herbals, the manuals published citing the supposed medicinal properties of fruits, vegetables and spices. Today, of course, you hear more about eating carrots as being good for your eyes. They contain a high content of beta carotene, which we convert into Vitamin A, essential for good vison. Asparagus is loaded with fiber and vitamins. But the way it makes urine smell, thanks to a sulphur-containing compound called methyl mercaptan, is anything but a turn-on.

Potatoes also enjoyed a vogue in the herbals published between 1500 and 1700 and were so well known as sexual stimulants that they showed up in Shakespeare. In the final act of “The Merry Wives of Windsor,” Falstaff dressed as Herne the Hunter, complete with stag’s antlers on his head, hopes of spending “a cool rut time” with Mistresses Ford and Page. When Mistress Ford greets her “male deer,” Falstaff replies:

“My doe with the black scut! Let the sky rain

potatoes; let it thunder to the tune of Green

there come a tempest of provocation, I will shelter me here.”

But, even with the aid of antlers and potatoes, Falstaff is destined to be disappointed in love. Spoiler alert: Mistresses Page and Ford maintain their virtue through the end of the play. By the way, in case you were wondering, “eringoes” are small herbaceous plants in the parsley family.

The round, breast-like shape of potatoes may explain their presumed aphrodisiac properties, which might also be the case for truffles. Though the latter are certainly far rarer, another factor that may contribute to their allure. In any case, the fame of truffles as fitting food for seduction also dates to ancient Greece and Rome.

Unlike the user-friendly potato, truffles cannot be cultivated on just any odd patch of soil. The small, round European fungi grow several inches underground near the roots of oak trees (or sometimes chestnut, beech and hazel). The only way to find them is by using truffle sniffing pigs or dogs. (Pigs are better at the task, but often dogs are favored since, unlike the swine, they will not tend to gobble up their finds.) If the truffle hunter does locate a truffle and it isn’t yet ripe, it will be reburied. If it’s harvestable, it cannot be touched by an ungloved hand, because it will rot.

Truffles are intensely flavored, and the way to use them in cooking is to shave them finely and add as an ingredient or garnish to omelets, risottos, pasta or in sauces. In short, the labor intensive nature of gathering truffles makes them extremely expensive. When you serve truffles to your sweetheart, you will be signaling how very highly you value her or his affection.

Ditto for caviar, another pricey delicacy which has traditionally been credited with aphrodisiac properties. Of course, wealth itself can pique romantic interest and if your date is able to afford premium caviar, not to mention accompanying champagne, that is a pretty positive indicator of a fat bank account. Or, at least of a pretty high limit on the buyer’s credit card.

Like truffles, the expense of caviar has both to do with the labor involved in harvesting and in its perishable nature. Caviar is, of course, eggs of fish in the sturgeon family that live in the Caspian Sea bordered by Russia and Iran. (Let’s not even consider the word “tariff” in connection with that particular geography, which could further drive up the price.) There is also American caviar which can be harvested from paddlefish (sturgeon relatives), native to the Mississippi and Ohio River watersheds.

Speaking of seafood, oysters are famous aphrodisiacs, and why they have that reputation may make a little more sense biologically, albeit with zero scientific basis. Roughly half of the body mass of an oyster is engaged in the business of making more oysters. They have both ovaries and testes and many species can alternate back and forth between being male and female. (You thought your Valentine’s Day might get complicated.) So, when you are consuming oysters, you are feeding largely on their gonads.

Finally, there actually may be a tiny bit of scientific reason for chocolate’s association with romance. Plants are living biochemical factories producing a multitude of compounds, and cocoa trees, from which the beans are harvested to make chocolate, are no exception. Among the many chemicals found in chocolate is phenylethylamine, which is the substance our brains release that results in the euphoric feeling of being in love. That said, the amounts are so small you’d really have to ingest massive amounts of candy, which is far more likely to produce feeling of being too full than of feeling frisky.

But then again, can there be such a thing as too much chocolate? •