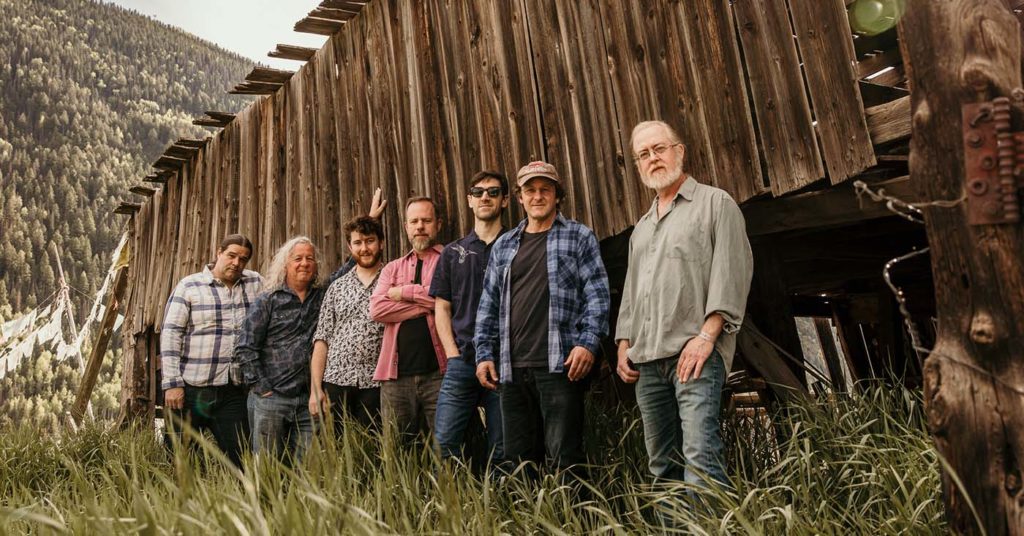 Celebrated string band Railroad Earth continues its decades-long journey into trippy, yet traditional territory with a career-spanning performance at Mercury Ballroom next week. In preparation for that improvisational, genre-defying set, we recently caught up with mandolin/bouzouki/piano player John Skehan by phone to discuss his New Jersey-based group’s ties to the Beats and the hippies, the ancient tones he achieves with his instruments and the eclectic ensemble’s determination to carry on after the tragic loss of founding member Andy Goessling.

LEO: Could you please explain the literary allusion behind the band name?
John Skehan: Well, the name comes from a Jack Kerouac poem titled ‘October in the Railroad Earth.’ It’s a stream-of-consciousness, flowing prose sort of poem that paints a vivid picture with words and vibes. Almost immediately after Railroad Earth was suggested to us, Todd [Sheaffer, lead vocalist] — in his usual absorbative songwriting fashion — also wrote a tune inspired by our new band name that ended up on The Black Bear Sessions. It was one of those songs that had really good vowel movement, as they say [Laughter]. I first heard the phrase ‘vowel movement’ in relation to the way Mick Jagger and Keith Richards would write something. You know, if you sing the vowels that sound like they go with the guitar riff, you’re bound to be onto something.

So, from Jack Kerouac and Neal Cassady, it’s not a giant leap to the hippies. What sort of impact did Jerry Garcia have on your approach to music-making?
When I first discovered Old & In The Way, the album where Jerry [Garcia] was playing banjo alongside Dawg [David Grisman on mandolin] and Peter Rowan [on guitar], and he was singing old school songs like ‘Pig in a Pen,’ it was sort of an epiphany moment for me. To see that Jerry was, at heart, a bluegrass guy, made the odd canon of Grateful Dead lyrics make sense all of a sudden. I also began to understand the underlying thread behind their music. It’s that thing that you can’t quite put your finger on. They’re supposedly a rock and roll band but they’re always playing folk and country songs while also doing weird jazz-like improvisations, right? Well, all that ties back to bluegrass. And seeing that such a thing was possible had a huge impact on me.

Is the distinctive voice you achieve through your mandolin a result of not having started out on that instrument?
That’s real high praise to hear that there’s something I’m doing with it that’s recognizable as my own. I started out playing guitar, then I studied piano for a while and eventually came around to playing mandolin. My approach to the mandolin changed completely when I joined Railroad Earth, though. I guess that’s because I was learning how to fulfill a specific role within the band, and, in my mind, that was to function like the right hand of a piano player, which we obviously didn’t have at the time. I was certainly inspired by Sam Bush and some of the other greats, but it was more about finding a voice for the mandolin that was right for our specific blend than anything else.

Of late, there has been a series of singles and EPs from you guys. Does that make more sense than LPs at this point, or is that just the way it has worked out?
I haven’t thought about EPs being a real thing since I used to collect punk records on vinyl. The main reason why we have put out shorter-length recordings, like Captain Nowhere, in recent years is simply because of our nearly non-stop touring schedule. It has been more practical for us to tackle slightly smaller projects while being in a state of perpetual motion.

What can you tell us about the current live show?
After all these years, we’re still out there trying to perfect something that falls between Americana folk and psychedelia, and we’re loving watching the chemistry within the band continue to grow and evolve. We’ve recently added some new musical elements like a Hammond B-3 to the mix, and a couple of beautiful souls named Matt Slocum and Mike Robinson have joined the touring ensemble. So, hopefully things are moving forward for us and our Andy [Goessling, who died of cancer in 2018] is somewhere looking down on us smiling away each time we play. •