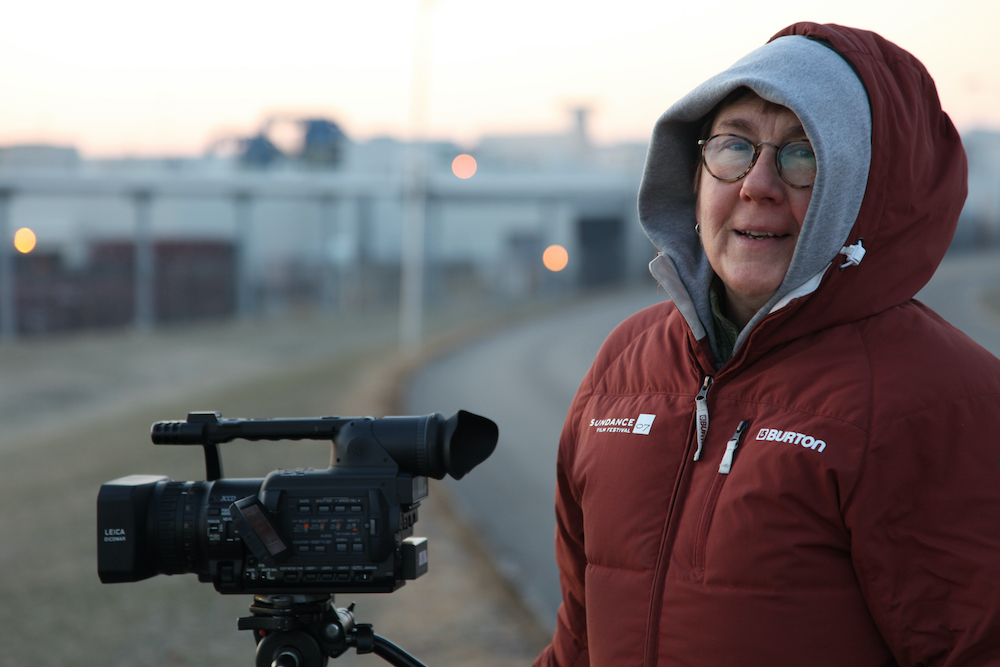 Earlier this month, director Julia Reichert added an Oscar for best documentary to her reasons to celebrate 50 years as a thought-provoking filmmaker. We recently caught up by phone with this celluloid storyteller — who is best known for exploring issues of class, gender and race in America — to discuss her impactful career and the retrospective screenings that will land her at the Speed Cinema for a series of special events this week. Among the many works to be featured there are “A Lion in the House,” “Union Maids” and a work-in-progress viewing of “9to5: The Story of a Movement.” There will also be a Documentary Master Class as part of the festivities. Plus a free screening of “American Factory,” followed by a Q&A  with Reichert. Click here for full details.

LEO: How did you shapeshift from being a young Republican into a socially-conscious filmmaker?
Julia Reichert: Everybody grows up with a point of view that’s shaped by where they live, who they live around, what their parents do, what their school is like and all of those kinds of things. I came from a rural area outside a small town called Bordentown, New Jersey. And pretty much everybody I knew there was a Republican. It was just how you grew up. Everyone loved Eisenhower and hoped for Nixon. It wasn’t polarized like it is now. I wasn’t a bad person. It was just all that I knew until I ended up at Antioch College in Ohio. That was a very progressive and very diverse place to be at the time, and the people I encountered there started challenging my ideas. I suddenly realized that I didn’t have good reasons for believing the things I did. And by that fall, which would have been 1964, I was going door to door for Johnson instead of for Goldwater. I will say that film also played a big part in my deepening awareness of the world in those days. For example, I saw ‘Night and Fog’ by Alain Resnais and, prior to that, I had no idea that there was a Holocaust. There were so many other eye-opening films that I saw early on in college that eventually led me to realize that this was a medium that could be used to influence people’s point of view and also advance their understanding of history.

Not too long after that, you made your way out to San Francisco during the so-called Summer of Love. What did you make of that scene?
I never crossed paths with Ken Kesey and his Merry Pranksters, but I remember being at this massive concert in Golden Gate Park with the Grateful Dead and the Jefferson Airplane. The image that sticks with me most from that day is seeing Jerry Garcia and some other fellow making their way through the crowd bearing this huge washtub full of salad, and all of these hippies were just dipping their hands in and pulling out lettuce by the fistful as Garcia passed by. I think the general feeling among all of us young people was just this sense that we were going to figure it all out ourselves and that we didn’t have to do things the way that they had always been done. That’s how I felt about filmmaking, too.

Is that around the time you fell in with the Women’s Movement?
I guess I knew by that point that I specifically wanted to make films about women, among other things, since back then, every newspaper photo, every magazine story, every television show, literally everything you ever saw with women involved was created by men, and I knew that had to change. I remember thinking that just depicting the lives of regular women would be a radical act because it had not been done.

In order to construct the narrative or, at any rate, flesh out the storyline of a documentary, you have to rely on the actual words of your interview subjects. Have you fine-tuned the process of gathering useful raw material over these last 50 years?
Yeah, I’ve definitely evolved in terms of process because every film teaches you a lot. If I had not walked down so many different roads before, I wouldn’t have been prepared for ‘American Factory,’ which was a very difficult film to make. Over the years, I have learned that there’s an art to asking good questions and to letting the silence hang there before you jump in with a follow up question. And as far as the people I talk to goes, I always try to let them be their own story now, rather than creating some story that I’d like to tell through their voice. You’re right, though, with documentaries, we’re not exactly working from a script, so a lot of the final story does often come together in the editing room based on whatever you’ve managed to gather along the way by shooting, and shooting all kinds of different stuff.