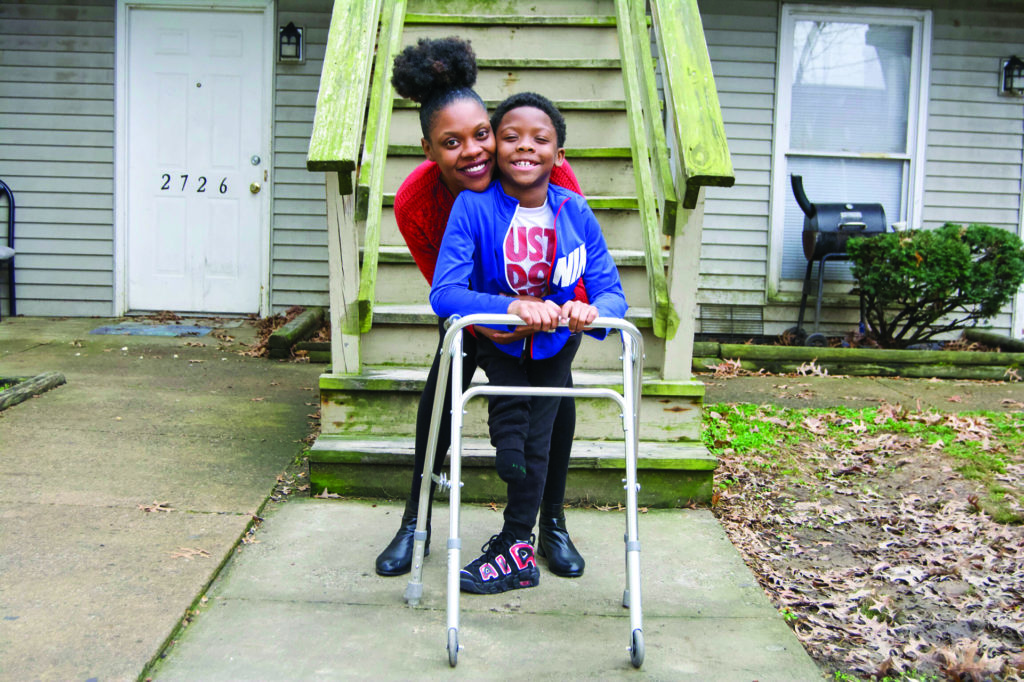 “I was 19 when I had my son. Some days it’s a struggle. When you’re a single mother, it’s kind of hard, but you get through it. You just have to make the best of it. Every day, I have a plan in my head, so I try to motivate myself to do better every day, so I can do better for him. Eventually, we will move out of The West End and move into a house. Eventually, I will own my own house and company. Other than that, we’re here. It’s not that bad. He has a disability. He was born like that. We were comfortable enough to get an amputation when he was younger, so when he got older, he’d be able to move around and do stuff. He’s fine with it. The school, I love it. The kids don’t pick on him. He’s made a lot of friends. His personality is dope. My personality is dope. I handle that well.

He’s my motivation. He has one leg, and I have two. I’m still trying to figure out where I need to go in life, and he makes it like nothing’s wrong. He goes through life, every day, like nothing’s wrong. He wakes up with a smile on his face. I look at that like I shouldn’t be upset about anything. I should wake up with a smile on my face and thank God that we’re breathing and we’re here and that nothing’s happened to us. We’ve been in good positions ever since. I did struggle, you know. I was homeless for a long time, like for two years with him. It was before his surgery. I got out of that because I had him, and I wanted him to have his own space. I wanted him to have his own home and for him to walk into his own home and be comfortable.

Being homeless was hard. I was sleeping on everybody’s couch. I was sleeping on the floor with my baby. I went to the shelter for a day, and it was hard. I was never comfortable with where I was at. Sometimes people would try to put us out because we didn’t give them enough money, or I just couldn’t come up with it. I would have a job, and I would have problems with someone watching him. I’m a single mother. I’ve been a single mother since he came out. His dad is incarcerated. I got us out of that situation. I didn’t want to be in that situation forever. Some people get comfortable because they don’t have those types of responsibilities and don’t want to pay bills. With me, I’m different. I wanted to get out and for us to have our own, and, ever since, we ain’t went down. I was homeless for two years after I had him — he’s 7 now — and I’m in my fourth apartment. I ain’t never been evicted out or anything. I stay on top of everything with him. My sacrifices and my life are around him. It’s not about me no more: It’s about him. So, anything that I do is about him. I make it a good environment.

The West End is not as bad as people make it seem like. You just gotta stay focused and stay out the streets. It’s the best thing. If you got too much time on your hands, and you’re out here, you’re not gonna be focused, and you’re gonna get into stuff. That’s why I stay where I stay at. I stay in my crib with my baby. If we ain’t got nowhere to go, we ain’t moving. If I don’t have to go to work, we ain’t going anywhere. My dad passed away two years ago. He taught me so much stuff before he passed away. That’s who raised me. He taught me how to hustle and how to get out here and get it on your own and to not let anybody deprive you of who you are. I know how to dance and sing. He knows my talents, but all it takes is for me to know. This year, I want it to be my year. I’m trying to get my own business. I want my own hair store. I’m trying to have something for our culture.

There’s a lot of suicides going on. You have to go through something to get through it. Life is not easy. You’re gonna go through a lot of stuff in life. It’s gonna get worse, but you always have to keep your head up. Have some self-love. I got a lot of self-love. I’ve never had that problem. People out here have depression, but keep your head up and have faith and have a relationship with God. Make sure you pray, and keep your family close to you. Stay positive and keep positive people around you. Love yourself because if you love yourself, you’ll get far.” •