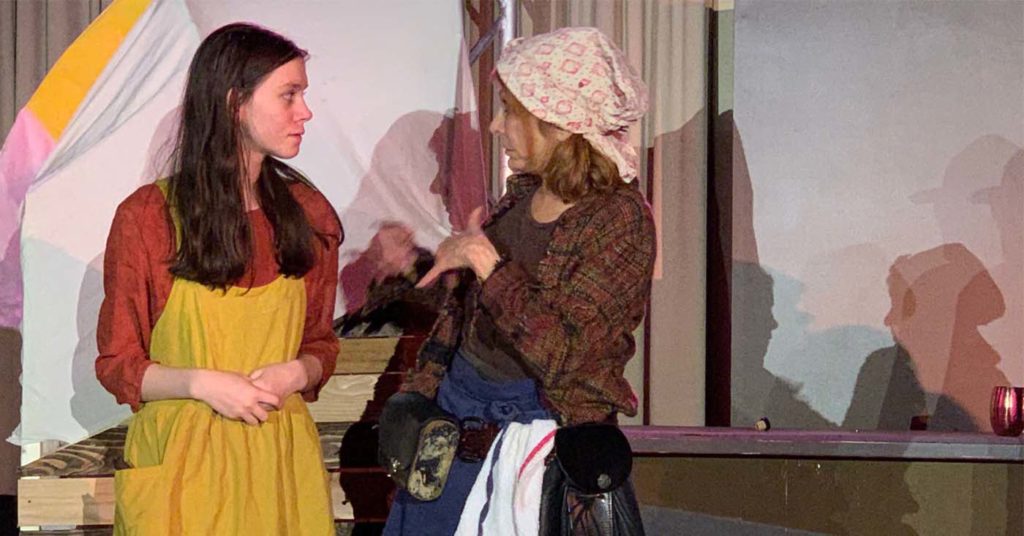 As far as I can tell, the last time Bertolt Brecht’s towering, dramatic masterpiece “Mother Courage and Her Children” was staged in Louisville was 2005, in a production by Walden Theatre (now the Commonwealth Theatre Center), unless there’s been an undocumented production in the years since. Now, it’s back, in a production by ShPIeL Performing Identity, directed by David Chack. This weekend is likely to be your last chance to see it for a while.

For this production, Chack selected the most contemporary American translation, Tony Kushner’s 2006 script that was used in a New York City Central Park production starring Meryl Streep and Kevin Kline — just in case you’re interested in its theatrical pedigree. Sometimes people refer to the script as a “translation with liberties,” and that is exactly what Kushner was striving for. This is a play about the stark, absurd, disturbing and, by turns, outrageously funny and tragic effects of war. Kushner’s goal, he has stated, was to translate not just the gist of the story but also the pace and feel of Brecht’s speech and song lyrics into contemporary English. He wanted the script to carry the rhythms, energy and rough-edged poetry of battlefields. And though the play was written in German in the late ‘30s and is set during the Thirty Years’ War (1618-1648), he wanted his script to have the impact of modern English, to ring with the harsh beat and rhetoric of battlefields.

It cannot be an easy script to perform. For one thing, it is an epic play, with a running time of three hours or so. For another thing, the beauty of Kushner’s language here is as austere and rough-edged as his subject matter. He creates rough-hewn poetry rooted in the Germanic side of English, with few of the mellifluous Romance language polysyllables that roll so easily off the English tongue. It’s a powerful script, and, on opening night, the cast tackled it with fierce conviction. And given that our own country has experienced nearly two decades of unceasing war, it’s a script that demands attention. For all its length and scope, this is a tightly constructed play that feels brief in the watching. Brecht, who had fled Germany in 1933 after the rise of Hitler, wrote it in the month after the German invasion of Poland in 1939. Twelve scenes over 12 years (1624-1636) track the lives and fates of Mother Courage (Rita Hight) and her children: her mute daughter, Katrin (Lila Schaffner), her youngest son, Swiss Cheese (Tucker Keel) and her oldest son, Eilif (S. Mackell).

Mother Courage is a trader and camp follower, who announces her manifesto in song early on: “Retail!” she shouts. “To feed a war you have to pillage, but let your soldiers rest a bit: For what they need, here’s Mother Courage, with woolen coats and boots that fit.” Mother Courage’s goal is to profit from the war while keeping herself and her children free of it. For her, military heroism is a fool’s game, but despite her wiles, while she’s making a sale, Eilif is conscripted, not so unwillingly, by an Army Recruiter (Katie Graviss Bechtler). From that moment on, the action proceeds in fast-paced tableaus populated by a couple of dozen characters portrayed by a cast of 12 who adroitly shape-shift from role to role.

Neither Brecht nor Kushner ever waste a moment, and the scenes, though not analogous in structure or content, have the episodic power of a procession along the Stations of the Cross. But this is a tour that highlights elemental needs: food, shelter, boots, clothing, medicine, sex, power, liberty and more. Memorable performances come from Terry Tocantins as a Cook; Bailey Story as a Chaplain; Gracie Taylor as a Prostitute named Yvette; Isaac Fosl-van Wyke in multiple military roles (Sergeant and General); Claire Wice as The One-With-Eyepatch, a sinister spy; Francesca Socolick as an obdurate Regimental Secretary; and Maxwell Williams in a variety of roles. In fact, all of these performers except Hight play multiple roles.

Under Chack’s direction, the terror, power and sometimes explosive and paradoxical humor of these scenes move inexorably toward a climactic moment. Hight gives a majestic performance as a flawed, fierce pragmatist whose own moral compass — such as it is — can never lift itself out of a pit of self-interest. But, eventually, the overarching cynicism into which all these characters sink crashes up against a moment of true, authentic heroism embodied by the mute Katrin (who in a wonderful piece of ironic casting also serves as the announcer heralding the beginning of each scene). Listening to Schaffner’s anguished, guttural, wordless cries of alarm as Katrin risks her life in an act of selflessness is both horrifying and purging, and though it may not be redemptive, it does shed a strange and dark flicker of light across all that has gone before.

Music for this production is composed and directed by Gregory and Abigail Maupin. Lighting is by Nick Dent. Mia Seitz designed the costumes. Ian Raleigh and Fosl-van Wyke designed and built the set.

‘Mother Courage and Her Children’