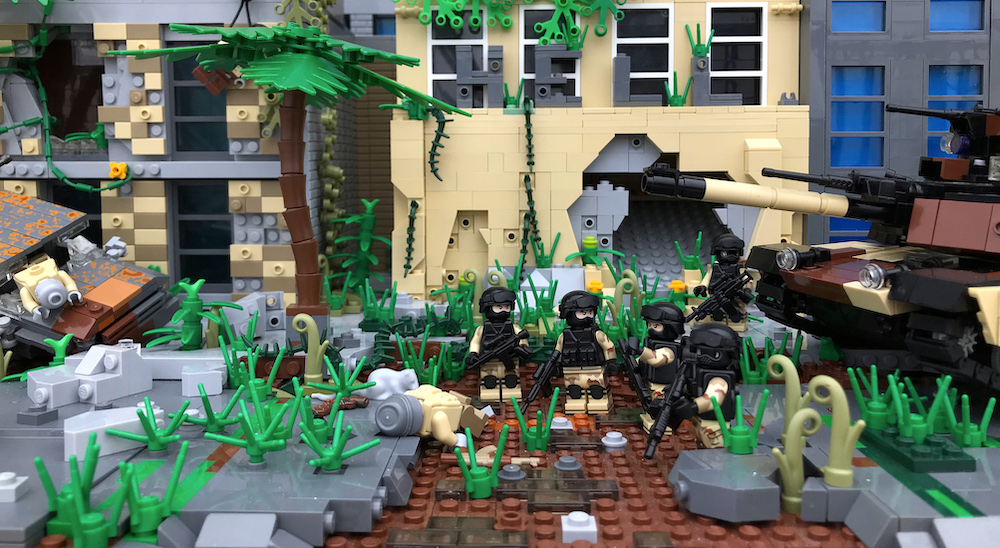 Louisville native Christian Cowgill will be a contestant on the new reality show “LEGO Masters,” which debuts Wednesday, Feb. 5 at 9 p.m. on FOX. Hosted by Will Arnett, the series pits contestants against each other in ambitious LEGO building challenges until the top teams face off for a $100,000 cash prize. Cowgill is a UofL student and a sergeant in the National Guard’s 63rd Aviation Tab, which specializes in tasking Black Hawk helicopters for disaster aid and relief. The 23-year-old, who’s the son of local sportscaster Fred Cowgill, is the youngest person in the competition. LEO recently spoke with Cowgill about his experiences on the show. But to find out if Cowgill won, you’ll have to tune into the show on Wednesdays.

LEO: How did you first learn about ‘LEGO Masters’?
Christian Cowgill: It was at a LEGO convention where my friends and I had built a display, and a man came up and said would any of you be interested in being on a TV show? And nobody said anything! I said, ‘Wow, let me introduce myself, I’m Christian, and I’d love to be on your show!’

What happened next?
There were a lot of interviews and several build submissions. It was a few months before they told me I made the cut. I was freaking out. I was ecstatic! I’ve acted in several theatrical productions at UofL, and in 2018 I had a cameo in a Netflix movie called ‘My Teacher, My Obsession.’ It’s been my ambition for a while to move to Hollywood after graduation and try my luck out there. So, this was truly the door opener to Hollywood that I’d always wanted. I felt like the luckiest guy in the world.

How old were you when you first discovered LEGO?
I was very young, maybe 3 or 4. I remember it very well — it was a Jack Stone Fire Rescue set, and I was immediately hooked. After that, I was always building things with LEGO in my free time. I couldn’t wait to get done with my homework so I could get back to it.

What was it about LEGO that struck such a chord with you?
The reason I loved it so much was it allowed for so much creativity. The young mind has infinite directions it can go in, and doing these builds stimulated my creativity and my development. I also loved that I could create things that someone at that age could never create in real life. I could build an entire city and customize every detail.

When was your first LEGO competition?
This was actually my first competition ever. But, I started getting involved with the online LEGO community in 2011 and have been to a lot of conventions — my first was in 2016. I really enjoy seeing the amazing builds other people create. It’s very inspirational. And I love meeting people with the same mindset and passion I have. It’s like having a whole new family. It’s crazy how these tiny, little bits of brick have linked people around the world.

I understand that many of your builds are inspired by your military service.
I love to display my passion for military uniforms and vehicles. I’ve built replicas of everything from a UH-60 Black Hawk helicopter to a MIA2 Abrams tank. I’m around a lot of amazing military vehicles in the National Guard, so I never run out of sources of inspiration.

Was your experience on the show enjoyable?
It was incredible. It was such an honor to meet so many creative people and get to see Hollywood and Los Angeles up close. I felt like I was in a movie. Coming from a military background, I’m not used to being pampered, but everyone was very nice and very humble, and they waited on us hand and foot. It was like a fairy tale. It felt like family. When it was over, I wished I didn’t have to leave! We shot for three months and wrapped at the end of December. I had to take a semester off from UofL to do it, which I was super nervous about, but I decided I had to chase my dream. It turned out to be the best decision I ever made.

Do you have a favorite moment from the show?
The best moment was walking onto the set for the first time. That’s when it hit me that it was really, truly real. I was half expecting something to go wrong before the show started taping, but when I walked onto the set and saw all the lights and those three billion LEGO bricks I knew it was really happening.

Tell me about your partner in the competition, Aaron Newman, a 24-year-old from New Hampshire.
Aaron and I met through the LEGO community and became good friends. We had never built anything together before, so I wasn’t sure what that was going to be like, but I quickly found out he has the ability to execute in a highly-intense competition. He’s very smart and articulate, and we made a great team. I was also impressed by the other contestants’ builds. They saw the bricks in a different way, and it changed my perspective.

Can you talk about some of the builds you did on the show?
One was called Dream Park Theme Park, where the challenge was to build an entire theme park. My favorite was one called Big City Challenge, because it’s always been my dream to build a gigantic LEGO city. Some of the builds took as long as 15 hours to complete. They let us take breaks, but it was intense and exhausting.

How have your fellow National Guardsmen responded to your exploits in Hollywood?They’ve been very supportive. Everybody in the Guard I’ve shown my military vehicles to has loved them. To be honest, before this show I was a little embarrassed about my hobby and thought of possibly getting out. But my experience on LEGO Masters has sold me — I’m staying in.