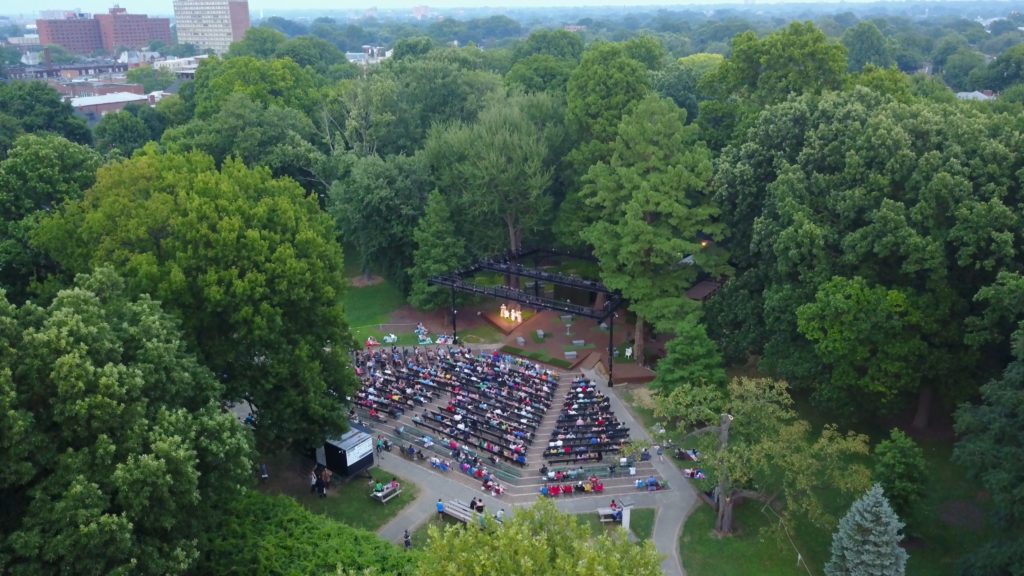 On Saturday night during its annual Shakespeare in Love gala, Kentucky Shakespeare announced the lineup for the 60th summer season in Central Park that includes “Shakespeare In Love: The Play,” “Henry V” and several other exciting tidbits.  (Read the full schedule here.) LEO caught up with Ky Shakes Producing Artistic Director Matt Wallace to dig a little deeper into this season.

LEO: So, the big news obviously is the presenting sponsorship from Churchill Downs. That allows you to pay for the rights for the stage version of the film ‘Shakespeare in Love.’ Is that a sponsorship you’ve been working on for a while? And is the play ‘Shakespeare in Love’ something you’ve wanted to do for a while?
Matt Wallace: Thanks to the generosity of Churchill Downs, we’re able to finally present the Louisville premiere of ‘Shakespeare in Love.’ This is a play I’ve been looking at doing for several years. I actually had rights on hold two separate times, with plans to present it at an indoor venue. Unfortunately, we weren’t able to secure sponsors, and the show was just too big to present indoors without one. Thanks to Churchill Downs, we’re able present this production to the public in our Central Park season — free of charge to those we serve! We’ve cultivated this relationship for a while. Churchill Downs and their foundation have previously supported our work with the Backside Learning Center, and we’ve performed there several times at Opening Night with Fund for the Arts. Churchill Downs truly understands the value of the arts and making it accessible for all. They’ve illustrated deep commitment to the arts in Louisville and Kentucky Shakespeare.

Does this sponsorship keep going after this year?
Wouldn’t that be nice?! This is currently a sponsorship of this opening production for our 60th season. My hope, though, is that through this partnership, Churchill Downs will experience the incredible impact this summer and how we are able to stretch and maximize those sponsorship dollars to serve thousands of people all summer long.

‘Merry Wives of Windsor’ — that’s one of those plays that doesn’t get performed a lot. It’s kind of a prequel to the history plays we’ve been seeing? Barrett Cooper is reprising the role of Falstaff for a third time. Will we see a more lighthearted take, given the fluffier material?
It’s been 29 years since we’ve performed this on the Festival stage. It’s Shakespeare’s ‘spinoff.’ The character of Falstaff was such a hit with Elizabethan audiences that he created this play for him just after the ‘Henry IV’ plays. This ‘Merry Wives’ production is a funhouse mirror version of our history cycle. It’s really very different from the Falstaff of the history plays. I’ve known and worked with Barrett for about 10 years now, and can’t wait to play with him on this one.

A lot of folks might think ‘Richard III,’ another play in Shakespeare’s history sequence, would be a really logical choice for the 2021 season. I’ve been reading up on Shakespeare’s three part ‘Henry VI’… which actually happens between ‘Henry V’ and’ Richard III.’ So, what are the chances we’ll see those? I mean, action-packed sequels are all the rage at the box office.
It won’t be long before we get to ‘Richard III’ again. We last performed the play when I directed it in our 2010, our 50th anniversary production. Right now, we’re focusing on this 60th anniversary summer. We’re looking at lots of future possibilities and what we’re going to do next. I do know we’re not going to take three summers to do all three parts of ‘Henry VI.’

Are there any other new aspects of the season or partners you are specifically excited about?
So many! We received a contract from the Office of VSA and Accessibility at the John F. Kennedy Center for the Performing Arts to provide a six week residency with Down Syndrome of Louisville, culminating in a pre-show sharing on our stage this summer. It’s the fifth anniversary season of Shakespeare with Veterans! They will take the stage with their own pre-show performance of ‘Henry V’ on Saturday, July 18.

At our gala we are delighted to announce a new collaboration for 2021! For years, I’ve been interested in ‘Shakespeare’s R&J’ by Joe Calarco. It’s a powerful reimagining of ‘Romeo and Juliet’’s star-crossed lovers, following four young men in Catholic prep school who discover the forbidden text of Shakespeare in a smuggled copy of ‘Romeo and Juliet.’ It’s a challenging, passionate, beautiful adaptation presented in a way we’ve not seen. We’re excited to partner with Pandora Productions on ‘Shakespeare’s R&J’ Michael Drury is an old friend, and I’ve been looking for an opportunity to work with him again. It’s our hope that we’ll both expand our audiences and expose our work to new friends. I will direct the production and it will run Jan. 28 – Feb. 6, 2021 at the Henry Clay Theatre.