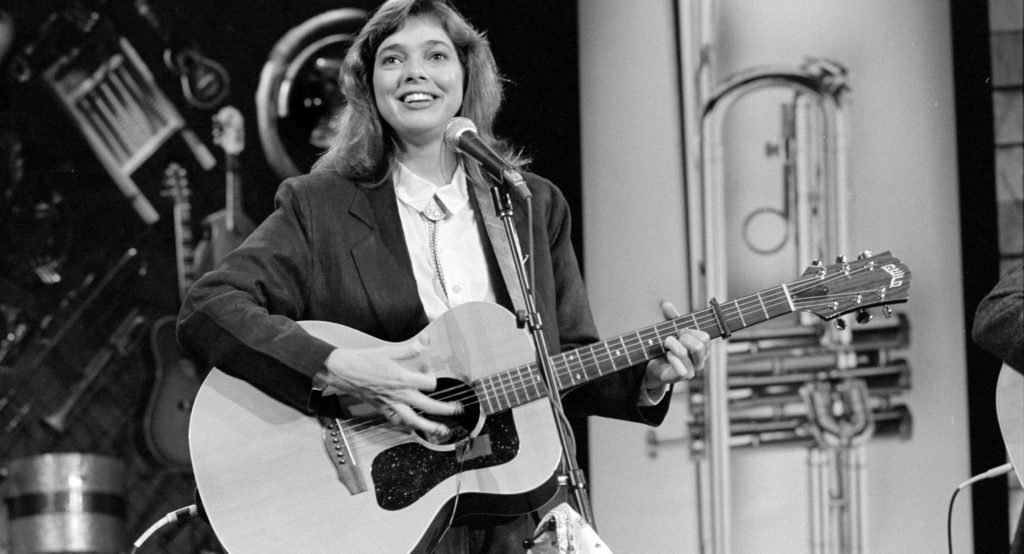 The airing of “The Lonesome Pine Specials,” the acclaimed concert series that began at KET and expanded to PBS, ended nearly 10 years before I moved to Louisville. The show itself, now that I am familiar with it, was extraordinary; many of the musicians — Lyle Lovett, Nanci Griffith, Alison Krauss and Béla Fleck, went on to find national fame after playing The Bomhard Theater at the Kentucky Center for the Arts between 1984 and 2000.

The fact I didn’t know of the show puts me, though, in a unique position to consider Richard Bram’s photographs on display in the exhibit “Kings, Queens and War Games” at the UofL Photographic Archives. Decontextualized from the history of the television show, the photographs — most of them gelatin silver prints — stand for themselves and speak to an era.

Bram, who now lives in London, photographed the performers on “The Lonesome Pine Specials” from 1985 to 1997, during which he accumulated an incredible amount of negatives. Only a fragment are presented in the show, but that fragment is by no means insubstantial.

It is impossible not to think of the early work of Annie Leibovitz when she was shooting The Rolling Stones in concert in the early 1970s. The aesthetic of Bram’s black-and-white film similarly lends itself to the nostalgia of the time.

The photograph of Lyle Lovett from 1987, one of the largest of the prints, is as well-orchestrated as Lovett’s performance surely was. Pictured in 1987, it would have been one of Bram’s earlier shots, yet the composition is confident, striking. The arrangement is flawless — Lovett occupying the left of the frame, the neck of the guitar fading into the darkness at the right, the determined look in Lovett’s gaze, the texture of his blazer, the wood of the guitar’s body.

The shot of Nanci Griffith from 1986 focuses our attention on the brightness of her face, a split second of joy that reminds us of Henri Cartier-Bresson’s notion of the “decisive moment” — an idea by a photographer that also influenced Leibovitz — capturing her forever in the permanence of the silver emulsion, the instruments of the stage’s backdrop floating around her in a symmetrical scene split precisely into black and lighter gray.

Some of the shots go, as the show did, to the limits of spectacle. Wrestlers accompanied by percussionists and a medicine show involving an organ and a whip are framed alongside the more familiar cultural figures that graced the stage: Carlos Santana, Youssou N’Dour, a young Alison Krauss, and — in a full color archival pigment print — Emmylou Harris.

Bram had free reign to photograph from whatever vantage he wanted, so long as he stayed clear of the crew. The result is a wide representation of perspectives of the performers and an array of lighting. Many of the limitations of shooting film in a theater that would have been dark by the camera’s standards — the pronounced grain, the shallow depth-of-field — in turn create the ambiance that calls to mind the kind of shooting one would have done for Rolling Stone magazine. It is by no means easy to shoot an indoor concert, where the moving parts are numerous, the moments fleeting.

One of the oddest things to consider is that the photographs are silent, mute even. What is missing, just as it is from any concert shot, is the very music that poured out, the applause of a crowd. What Bram attempted to catch, to varying degrees of success, is the energy of the show. Many of the shots are naturally of performers from the audience’s perspective, but a shot of Asleep at the Wheel’s performance is taken from behind the band, with the audience filling the background, and here we are privy to what the performers experienced.

The show also features, in a display case, photographs of many of the crew involved in making “The Lonesome Pine Specials” happen, from makeup artists to cameramen to those directing the lighting. The viewer can also watch a documentary that was shown on the show’s opening day, featuring digitized bits from the shows — all taken from aging videotape.

A good image to close on, a shot that typifies what the Specials were about, is the portrait of Cyril Neville. Bathed in the pyramidal splay of stagelight, the raised hand triumphant, celebratory of all that we were in 1988 and all we could be, given that the clothing Neville wears seems timeless, the figure exemplifies — and entirely silently — the excitement of the musical performance and a moment that we ourselves pack away as a memory to be looked at decades later, imperfectly. It draws our attention, too, to the ways we can look at a concert beyond being merely a performance.

“The Lonesome Pine Specials,” Bram’s photographs insist, like any concert, were a communal gathering. We came to be lifted out of the everyday concerns, if only for an evening, and to share with both the audience and the performers a moment of elevation, the sense of possibility that rises from a moment of pure joy. He honors all these people, as well as those who worked tirelessly to light, amplify and record the shows, so that we might remember that music is one of our clearest examples of a cultural heritage. Exposed or inked on paper and set under glass, these moments of unity are declared, like the music that has faded into the air, to be honored as art. •