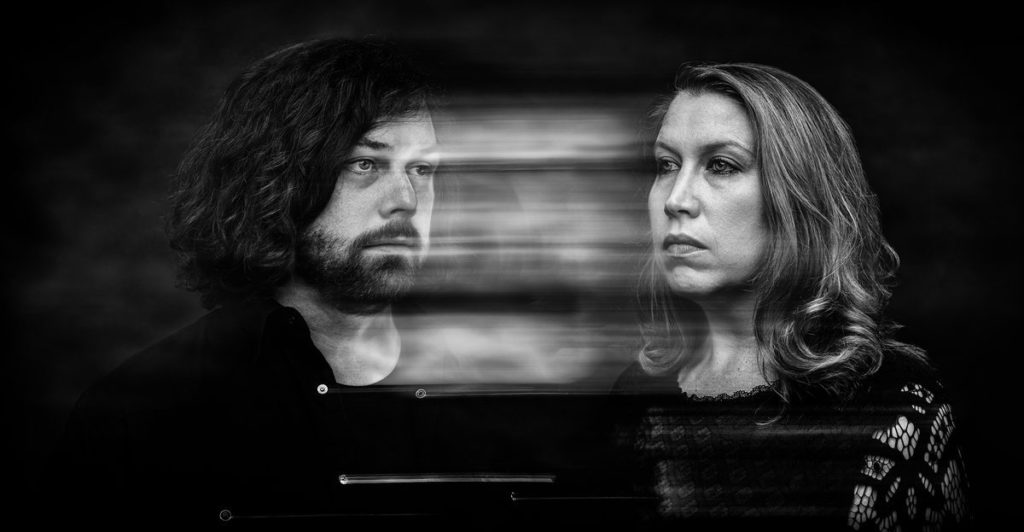 Fool’s Ghost — ‘Touch’
“Touch” has coiled tightness, a brooding seethe just underneath the surface that is imminently on the verge of striking, a wave eternally cresting. Handling keys and vocals, singer Amber Thieneman exudes unnerving zen when she calmingly requests her muse to, “Just focus on your breathing and come back down to me.” Coupled with the tension of guitarist Nick Thieneman’s Morricone-esque lead work, a Southern gothic element is at play. The pre-chorus admission of “I just want to feel your touch” is, in and of itself touching, a longing for intimacy at the most basic and sublime of levels. As such, this track is primal and tender.

Father Tongue — ‘All Hand’s Up’
Desperation is at the heart of “All Hand’s Up,” one of a trio of tracks from the debut release by Father Tongue. The solo endeavor of Brian Vargas is an homage to the noisy indie rock of the late-‘90s, a pastiche of Unwound or Blonde Redhead as filtered through new wave. Vargas’ voice has a Peter Murphy quality, and the lead guitar line recalls Joy Division at their very best. The visceral riffs and baroque vocals foster a sense of urgency in the music, which is captured in the lyrical content. “All Hand’s Up” is a response to despair in a time of bleakness, to not surrender in spite of what might seem like insurmountable odds.

Mommy’s Cigarettes — ‘Pill Itch’
Mommy’s Cigarettes has a a throwback grunge vibe that recalls Nirvana and the Dead Milkman equally — playful, but heavy all at once. With “Pill Itch,” the band explores casual drug use and the uncomfortable truths that come with that, including upset stomachs and digestive issues. Never has a song with the lyrics, “If I rise, alive, culpa mea / Upset, stomach, diarrhea” carried more dramatic weight, with some of the tongue-in-cheek qualities of the vocal delivery. That’s not to take any of the piss out of the subject matter, though, as the band deftly maneuvers through the toils of depression and anxiety, realized here through blackened mirrors and drug and alcohol consumption.

Gabe Evens — ‘Louisville Skyline’
Modern jazz often has to escape the velocity of late-century cheese, the Kenny G level of commercialized detritus that redefined a genre. Fortunately, modern jazz is a combination of conventional, if almost pop structure, and a coloring-outside-of-the-lines mentality. Here is where Gabe Evens and company really shine. On “Louisville Skyline,” the band is prone to flights of fancy, to give each constituent player a moment in the spotlight, from the superlative drumming to the horn and piano interplay. At the heart of the work is a rock-steady standup bassist who holds down not only the low end, but the bulk majority of the tracks structural integrity. The other musicians are able to play against type, exploring some wild tangents along the way, a delightful representation of the often unpredictable Louisville cultural landscape.

Ultima — ‘Time Dilation’
The mid-‘80s sci-fi score that you didn’t know you needed, “Time Dilation” features the kind of foreboding synth sounds and driving electro beats that defined a generation of cinema. An instrumental number, what Ultima does so well is to build on the tropes of the genre without conceding to nostalgia alone. That’s to say that core elements that you would expect here — throbbing synthesis and plodding beats — are apparent, updated with a forward momentum and thrust often lacking in previous examples.Starting with a slow and ominous thud, the track methodically works through the numbers, ceaselessly moving toward a double time crescendo. It’s here that you can imagine running from whatever futuristic cyborg has appeared to erase you from the space-time continuum, matching the intensity of the unending drum machine creep. This will transport you to a dark, neon-lit alley, a neo-noir cyberpunk element that screams caution in the face of technological abandon.