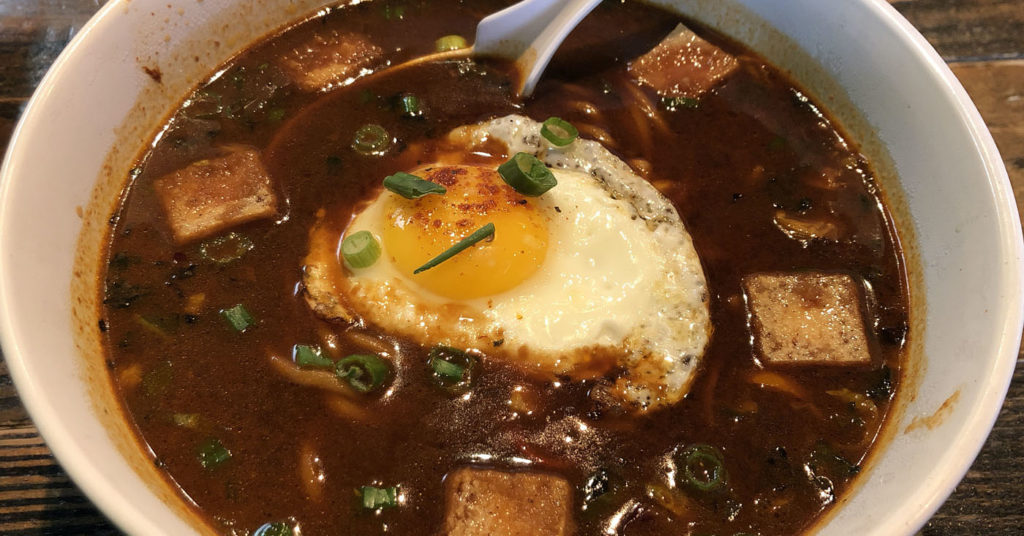 I’m generally a bit skittish about restaurants that offer a mix of different world cuisines that extend well beyond the chef’s personal DNA. How can one chef master so many culinary arts?

So, I wasn’t sure what to expect when Diamond Street Grub & Hops came to town last summer: Its international menu draws randomly from the street food traditions of an edible United Nations.

Opened last July in the space that had housed Mellow Mushroom (and, for years before that, Dutch’s Tavern). Diamond Street Grub & Hops is sibling to the nearby Diamond Pub & Billiards. Jared Matthews, owner of both establishments, also owns St. Matthews landmarks Lou Lou Food & Drink and Equus Restaurant & Jack’s Lounge.

Diamond Street Grub stands out, though, not only for its array of 40 craft beer taps (plus more modest selections of liquor and wine) but also for its selection of three dozen dishes, all chef-built riffs on international street food fare.

Chef Dustin “Che” Stevens’ bill of fare is affordable, ranging from $4 (for individual street tacos made with your choice of chicken, pork, steak or fish) to $15 (for a tuna poke salad, street grub burger or London fish and chips). A short but appetizing Sunday brunch menu, mostly Mexican-accented with a couple of Mediterranean excursions, features nine entrées from $10 to $13.

We dropped in for lunch and had the place largely to ourselves. Let’s face it, the St. Matthews strip is a nightlife destination, but that’s all right. We came in, took a quick left to avoid the high tables and stools in the bar section and ended up in a small game room. The main dining room, it turns out, is a lighter, more spacious room around the corner to the right. We were fine where we were, though, and once someone noticed we were in there, service was friendly and prompt.

I used the time to try to figure out how many countries and regions were represented on the menu. I spotted Mexico, Korea, the Caribbean, Japan and the American South before I even got out of the appetizers and then found Hawaii, Belgium, Italy, Cuba, England and Greece farther down the page. I expect I missed a few.

We took a quick culinary trip around the world with a couple of starters and a couple of mains. Most dishes are served fast food style on metal trays lined with wax paper fashioned to look like a newspaper, The Specialty Times.

Spicy Mexican elotes ($9) got us off to a good start. Based on taqueria experience, I expected a single corn cob. I got three, properly slathered with a thick mix of mayo and crema, dusted with earthy cotija cheese and red chile powder and topped with thick slices of red, green and orange jalapeños. I figured I’d take one or two home, but suddenly, unexpectedly, I had eaten them all.

Moving to Japanese cuisine, we dove into a bowl of gyoza ($10). They were similar to traditional potstickers but made with green spinach wrappers and deep fried, not pan fried, until they were crunchy and delicious. They were filled with bits of carrot, cabbage and thin rice noodles and sprinkled on the outside with white sesame seeds. A thick, brown dipping sauce was fashioned from peanut butter, miso and a shot of cayenne.

A tuna tataki wrap ($12) melds Japan and Mexico and a taste of Hawaii in an exceptional flavor combination. A simple, flour tortilla was wrapped like a burrito around a generous portion of tuna poke salad. Inch-square chunks of tuna had been dry-rubbed with spice, then quick-seared so a thin exterior rim was cooked while the rest of the fish remained sushi raw. It was nestled in a light but intriguing salad of lettuce and thinly sliced carrot, daikon, red cabbage, kale and Brussels sprouts in a tangy, ginger-orange dressing. It was an admirable dish ,and the fries served alongside were pretty good, too, hand cut and crisp.

Speaking of ramen, Diamond’s is the deep, rich and dark style based on miso, the intense, thick umami-loaded fermented soy paste. It’s $12 for a big bowl; you can leave it plain for a vegetarian treat or add $2 for chicken and pork or $4 for pork belly. It made a filling winter repast, loaded with Japanese wheat noodles, veggie bits, cubes of crisp-fried tofu and, floating on top, a soft-fried egg.

Like many of its neighbors in the busy St. Matthews nightlife zone, Diamond Street Grub is open seven days a week for lunch and dinner and late into the night, closing at 2 a.m. Fridays and Saturdays and midnight the rest of the week. With appetizers and main dishes and delicious, fresh-made iced tea ($3), our meal for two came to $48.76, plus a $10 tip.

Noise level: We dropped in for lunch and had a quiet room to ourselves. Come back during the evening when the St. Matthews strip is hopping and it will be another story. (Average sound level was 70 decibels, the sound of quiet conversation.)

Accessibility: The restaurant and rest rooms are accessible to wheelchair users except that most bar seating is on high-top tables.