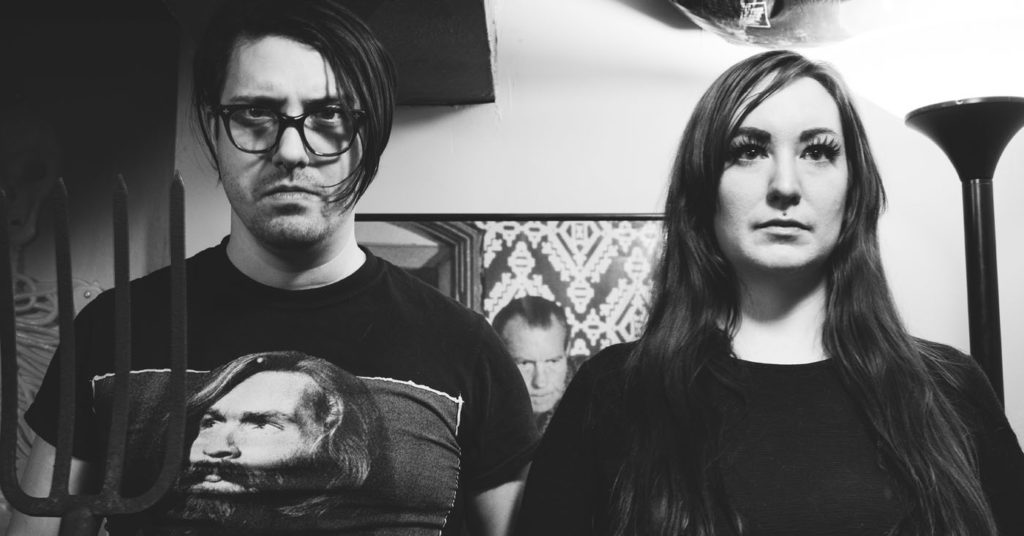 A thrash metal band, a neighborhood bar whose motto is “Beer. Monsters. Music,” a few punk bands, some cake, flowers, fake blood and improvised bachelor/bachelorette parties will all be part of what has the potential to be the most interesting Louisville wedding of the year.

To be more clear, Courtney Poole and Evan Fowler are inviting you to celebrate their wedding day this Valentine’s Day at Kaiju — which is taking place during a concert by Belushi Speed Ball, Prayer Line and Mommy’s Cigarettes. In lieu of postmarked invitations with gold foil RSVP cards, there is a Facebook event page where you can mark “Interested” or “Going” to join the already 250 guests who plan to witness this public ceremonial event.

The couple will be officially married halfway through Belushi Speed Ball’s set during the infamous “wall of death,” but more on that later.

The Road To The Wedding

Poole is a 31-year-old, spirited, black-haired bride-to-be with eyelashes for days and a penchant for the dark and ominous. She moved from Corydon, Indiana over two years ago and shortly after became friends with Evan via Facebook.

“One day I just decided to start a conversation [with him],” she said. “We didn’t meet in person for probably a month or so. I liked him pretty much instantly. He’s very funny and smart and very sweet. I certainly didn’t know we’d end up getting married, but here we are!”

Fowler remembered, “One night I was up late with anxiety, and she messaged me directly about it. It’s something she’s dealt with a lot, but really, she just thought I was cute. After talking a while, she came over to my place, and I made her a nice dinner, and we watched cartoons. No hanky-panky. I thought that she was an absolute goddess, and hoped I wouldn’t donk it up.”

“From the start, we knew we wanted to do something more than a courthouse wedding, but weren’t interested in a super-costly or heavily-planned affair,” Poole said. “We had only vaguely discussed getting married before Evan’s proposal, but some of the times we had, we would joke about doing it during a Belushi Speed Ball set. We’re close with most of the band, and some of my very best memories, since I moved to Louisville, have been at their shows or with the members doing other things — we saw the Misfits in Chicago with Vinny [Castellano] and Beau [Kaelin] last year. We looked at a lot of those elopement packages you could do in different cities, but the idea of getting married during one of their sets kept creeping back up. Then we realized Valentine’s Day was a Friday and just decided to do it.”

Kaelin performs as the costumed character Señor Diablo, the band manager of Belushi Speed Ball, with his signature bottle of mysterious, green liquid masked as Listerine, which he offers to all in attendance brave enough to take a swig. He also happens to be licensed to marry people in Kentucky.

Kaelin officiated one other wedding approximately two years ago for a couple who were former students he taught as a schoolteacher.

“I have married people before,” Kaelin said. “But this will be in the middle of a wall of death, mid-Belushi set.”

When asked to explain the “wall of death,” Beau said, “The audience moves to either side of the room, prepared to mosh into one another, but in this case, the length of time they stay there will be the length of the ceremony.”

Belushi Speed Ball is a band known for unpredictable, themed shows and eccentric antics, which include things like silly string or 10 pounds of Nerds candy in a fertilizer spreader.

“Our parents are iffy about coming because they have some idea how wild and late it’ll be,” Fowler said. “But they know we’re both the type to march to the beat of our own drum, so something like this was kinda expected.”

Fowler also plays bass and sings vocals for punk band Mommy’s Cigarettes, a “kind of a tongue-in-cheek punk project,” which will be performing a bachelor party-themed set.

“I’m not sure what all we’re doing, but to quote [the 2003 movie] ‘Party Monster,’ ‘It’s my party and I want a blood feast!’ Which will mainly involve getting people to chug food-colored booze and eat blood-themed treats. And, of course, candy cigarettes.”

Horror rock band Prayer Line will be performing a bachelorette-themed set. Singer/guitarist Phillip Olympia said, “We were considering bridesmaids dresses, but that was way harder than I thought it would be.” Then later added, “I’m told we might be dressing as sleazy male strippers.”

“I don’t know everything that’s going to happen that night,” Poole said. “But I do know that it will be fun, unique, full of love — and horror… probably fake blood — and some Listerine being pushed by Diablo, so a perfect reflection of our relationship. And if you plan on stopping by for the fun — like I’ve told everyone else — don’t wear something you’ll be upset to have ruined.” •