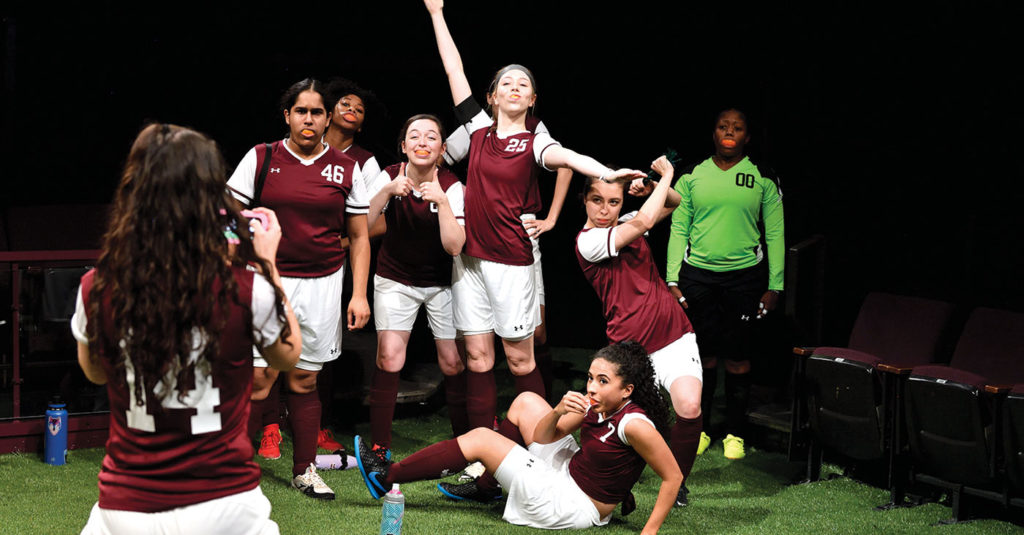 It’s hard to go into Sarah DeLappe’s “The Wolves” with low expectations, considering the play was a 2017 finalist for the Pulitzer Prize for drama. You may, however, go into the show wondering what exactly it’s about. A brief description of the premise tells the story not of actual wolves in the wild but of another type of fierce beast altogether — a high school girl’s soccer team. So, it must be a play about the team’s journey to the indoor soccer championships, right? Well, not exactly. In fact, in the Actors Theatre of Louisville production we never see an actual soccer game.

“The Wolves” is light on plot and works better as a series of vignettes, each set during a practice or pregame warm up in an indoor soccer facility during the winter season. We’re told about the games through exposition usually by the team captain, referred to only as #25 (Regan Moro): a crushing defeat means they train harder. A win is good, but don’t get too cocky. But the real meat of this play is when they’re not talking about soccer at all, and, instead, we get to know the team.

When we talk about “teenage girl stuff,” there’s often a condescending limit to our perception of the category. People assume teenage girls want to talk about boys or their favorite celebrities or gossip about people at school. The beauty of DeLappe’s script is that it showcases that “teenage girl stuff” is, well, everything. The conversations move from boys (or girls) they like and teams they’ve played before to the Cambodian genocide and the conditions of immigrant detainment centers in this country. They gossip about each other and support each other through tough issues such as abortion and a sick family member. Girls call each other out on offensive language and, in the same breath, fall into stereotyping. Often, these varied conversations cross lines so intricately that the audience has a hard time separating them, but the mile-a-minute, overlapping dialogue makes it feel more authentic.

The show also doesn’t cut corners when it comes to the characterization. With nine girls on the team, it’s impressive how each character feels unique and fully developed. For instance, characters such as #7 (Angelica Santiago) and #14 (Gabriel Elizabeth Kadian), who attend the same school and are clearly best friends, share similar interests and a sense of humor. But #7, with her brash personality and hot temper, feels distinct from #14, with her vanity and enthusiasm. #2 (Avery Deutsch), the “good girl” who is established as being from a religious family early on, could have been an evangelical conservative stereotype but, instead, is portrayed as being more liberal and passionate about human rights. Even the two characters who seem to struggle socially, anxious goalie #00 (Angela Alise) and the awkward new girl #46 (Sushma Saha), struggle in different ways.

The final scenes were wrought with tension, and the buildup was expertly handled. From the moment we saw #00 have a meltdown on the AstroTurf by herself, we knew something had happened. By the next scene, it was clear that someone had died though it was only revealed slowly over the course of dialogue clues how they died — hit by a car during an early morning run. The scene starts with two girls and then three, and one by one they start to filter in, leading the audience to wonder with growing anticipation who won’t show up.

While there’s certainly still a need for stories about feminist issues and how much the patriarchy harms our society, I found the most refreshing thing about this show to be that it was a show featuring exclusively female characters — and almost entirely teenage girls, aside from one appearance of a soccer mom (Jessica Wortham) at the end, but it wasn’t a show about the fact that they were teenage girls. It wasn’t a show about how hard it is to be a girl in our society or about rape culture or the patriarchy, though those things were touched on occasionally insofar as they were relevant to the lives of the girls. But overall, it was just about a soccer team who had been playing together for years, the things they thought about and their relationships with each other. The most empowering thing to me was that it could be a cast full of women and didn’t have to be about being a woman.

As a fan of Actors Theatre’s Professional Training Company for a few years now, I was delighted to see members of last year’s PTC alongside this year’s Alex Lin (who played #11) and Mollie Murk (who played #8). Santiago has popped up in multiple shows in Louisville since the end of last year’s PTC season, especially with Kentucky Shakespeare, but it was also nice to see Deutsch and Ashley N. Hildreth (#13) back on the Actors Theatre stage again. •