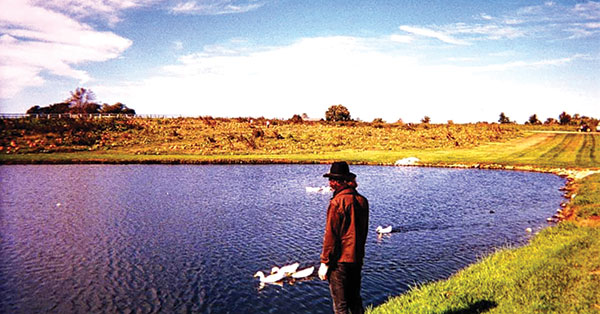 Mickey Osthimer, the mastermind behind the indie folk project The Captain The Ship, knows that sometimes nostalgia has a dark side.

“‘Drive To Hamilton Lake’ is a story of someone failing to happily reminisce about an innocent and joyous time in their childhood,” Osthimer said.

While Osthimer fondly remembers the car rides his parents and brother used to take to an Ohio cottage and the natural beauty that surrounded that place, those memories also make him think about the religious values he’s separated himself from, as well as the government’s problematic attitude toward climate change.

“Naturally, things change,” he said. “I’ve since distanced myself from the evangelical influences that saturated many environments of my childhood. Having spent most of my childhood outdoors and developing a bond with the environment, I loathe all the destruction we’re seeing. And the inaction of those in power and the digital smoke-screen we use to communicate with each other. I initially didn’t intend for such a politically-driven aspect of the song to take shape but it seems to me that creating art within the last few years practically demands it.”

“Drive To Hamilton Lake” is a smooth song laden with haunting guitars and punchy backbone that drives the song (which, as the song title suggests, is exactly the point). Though it boasts a traditional structure, Osthimer surprises us with some unexpected vocal melodies in his aching, longing croon that could easily share a sonic shelf with early 2000s bands such as The Thrills or The Stills.

“Early on, the song was intended to be heavier,” he said. “At the same time, it was also never intended to sonically punch the listener in the face. When it got into the studio, my producer suggested toning back a number of moments and crafting the vibe of driving. It clicked that I had been forcing it a bit too much all along. Most of the song’s better elements, musically speaking at least, were made in that room.”

Fittingly, the song begins with the sound of an automobile starting up, which is something that Osthimer originally found overly literal.

“I told myself I absolutely would not include the sound of a car starting,” he said. “It just seemed too cheesy. But we recorded the acoustic guitar at the beginning of the song on a tape deck and found it kind of difficult to start on the first downbeat because we never did a count-in, and it reminded me how my car only plays cassettes and often won’t start a side at the beginning of the first track. So, we recorded the sound of my car starting. I’ve simply come to learn to appreciate the little things in life.” •